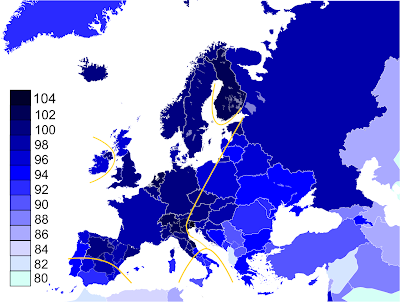 Do older fathers have dumber children? For the past millennium, paternal age has been relatively high in Europe west of the Hajnal line. Yet, if anything, mean IQ is higher there than elsewhere. H/T to JayMan (source)

Greg Cochran has been running a series of posts on paternal age and IQ (here, here, and here). His argument is similar to the one he put forward for temperature and IQ:

1. Because intelligence requires the correct functioning of large numbers of interacting genes, it is more sensitive to random mutations, perhaps more so than other genetically influenced traits.

2. The higher the mutation rate, the greater the likelihood that something will go wrong. Mean IQ should thus be lower in a population with a higher mutation rate.

3. As men grow older, they accumulate mutations in the DNA they pass on to their offspring. Children born to older fathers should thus, on average, be more mentally deficient.

4. Mean IQ should thus be lower in populations where men begin to reproduce at an older age. This is notably the case in highly polygynous populations, such as the âfemale farmingâ peoples of sub-Saharan Africa, Papua-New Guinea, and Australia, where women can more easily provide for themselves and their children without male assistance. In such societies, it costs less for a man to take a second wife and, typically, it is the older men who monopolize the women.

In most human societies, males marry later than females, partly because their maturation is slower, partly because older males with more resources take more than their fair share of nubile women. This is especially true in polygynous societies. Typically, the more men are polygynous in a given society, the greater the age difference between husbands and wives. Indeed, given an approximately equal sex ratio, this mean difference in age of marriage between males and females is the main factor making extensive polygyny possible. (van den Berghe, 1979, p. 51)

How large is this sex difference? Among the Nyakyusa of southern Tanzania and northern Malawi, the difference is said to be ten years or more:

[â¦] there is a difference of ten years or more in the average marriage-age of girls and men, and it is this differential marriage-age which makes polygyny possible. A legal marriage is effected by the transfer of cattle from the groom to the brideâs father, and the system is linked with a late marriage-age for young men and with a privileged position for the older men. Many men have not cattle with which to marry until they are well over 25, while their fathers may be able to afford more than one wife. (Wilson, 1950, p. 112)

In their review of polygyny in sub-Saharan Africa, Pebley and Mbugua (1989), found that polygynous households were headed by men who were, on average, in their late 30s to their early 50s. It is worth remembering that these figures come from the late 20th century, when male life expectancy was much longer than it had been earlier. Polygynous men were now living to much older ages. This point applies to Cochranâs observation that mean paternal age is 47 in rural Gambia (Cochran, 2012c). Not so long ago, most men died before their mid-forties …

It is also worth remembering that marriage is not the same thing as reproduction. In highly polygynous societies, men often begin reproducing before marriage:

The temporary celibacy of young men in polygynous societies is rarely absolute, however. While it often postpones the establishment of a stable pair-bond and the procreation of children, it often does not preclude dalliance with unmarried girls, adultery with younger wives of older men, or the rape or seduction of women conquered in warfare (van den Berghe, 1979, pp. 50-51)

But these are not the main shortcomings of Cochranâs argument. The main one is the existence of another culture area where men typically did not marry until their late 20s or early 30s. This is Western Europe, specifically Europe west of the Hajnal line, where most young men had to postpone marriage until they could inherit a plot of farmland. This pattern is attested in the earliest marriage records, notably those of an English community between 1252 and 1478:

The average age at first marriage in the Lincolnshire Fenland before the Black Death would be 24 years for the woman and 32 years for the man. The wife would die one year before her husband and the marriage would last for about 13 years. The couple could have six children, if their fertility was higher than average, of whom, judging by pedigrees, perhaps three would survive to become adults. After the Black Death the mean age would be 27 for the woman and 32 for the man. The husband would die three years before his wife and the marriage would last about 12 years. Again the couple could have six children, of whom perhaps three would survive to become adult. (Hallam, 1985, p. 66)

This pattern may go even farther back in time. Seccombe (1992, p. 94) cites a 9th-century survey of the Church of St Victor of Marseille, where both men and women appear to have married in their mid to late twenties.

So, for the last millennium, most Western European men began to reproduce at around the same age as their counterparts in sub-Saharan Africa. Over most of that period, they would have ended their reproductive careers at an older age, given the difference in life expectancy.

Yet it is in Western Europe where we find some of the highest mean IQs in the world. One might counter that IQ has been pushed upward by strong selection pressures, notably those associated with gene-culture co-evolution. Undoubtedly. But, then, why cannot gene-culture co-evolution stand alone as a sufficient explanation â¦ not only for Western Europeans but also for sub-Saharan Africans? ← East Germans Are Getting a Lot Smarter ...Trans-Species Polymorphisms →
Current Commenter
says:
Current Date at Time Now
Leave a Reply - Comments on articles more than two weeks old will be judged much more strictly on quality and tone
Cancel Reply
Commenting Disabled While in Translation Mode