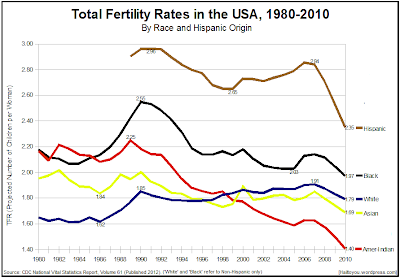 Total fertility by race, 1980-2010 (source). Is the end of White America being hastened by the Obama presidency? Or is it actually being postponed?

Both the right and the left are trumpeting the Obama presidency as marking the end of White America. In a harshly worded column, conservative Ann Coulter argues that Obama and the Democratic Party are deliberately changing Americaâs demographics:

If the same country that voted in 1980 had voted in 2012, Romney would have won a bigger landslide than Reagan did.
Most Americans donât realize that, decades ago, the Democrats instituted a long-term plan to gradually turn the United States into a Third World nation. The country would become poorer and less free, but Democrats would have an unbeatable majority!

Under Teddy Kennedyâs 1965 immigration act, our immigration policy changed from one that replicated the existing ethnic population to one that strictly favored unskilled immigrants from the Third World. Since 1968, 85 percent of legal immigrants have come from what is euphemistically called âdeveloping countries.â (Coulter, 2012)

Clearly, the 1965 immigration act was key to this demographic revolution. Just as key, however, were successive legislative changes, and increasingly lax enforcement, that progressively raised the levels of both legal and illegal immigration. Also key were differences in fertility rates. Non-White fertility stayed high long after White fertility had fallen during the 1960s and 1970s.

This demographic revolution, however, had the backing of both parties. Yes, the 1965 immigration act was ratified by a Democrat president, but it won the votes of most Republican lawmakers. Supporters included then congressman Gerald Ford (R) and then congressman Robert Dole (R). In fact, there was more opposition from Democrat lawmakers:

After 1965, there came successive moves to increase the overall intake, and these moves were likewise Republican-backed. In fact, they were signed into law by Republican presidents. In 1986, Reagan proclaimed an amnesty that not only provided about three million illegal immigrants with citizenship but also set off a baby boom:

Bush Sr. signed into law the Immigration Act of 1990, which raised the annual legal intake of immigrants from 500,000 to 700,000 (Wikipedia, 2012c). And like his son, he declined to enforce sanctions against employers of illegal immigrants. By the time of Bush Jr., total immigration, both legal and illegal, was running at over one and a half million a year (Camarota, 2007). Far from ending illegal immigration, Reaganâs amnesty had set off a new wave of âundocumented workersâ from south of the border. By 2007, the U.S. was home to an estimated 12.5 million illegal immigrantsâmore than four times the number that Reagan had amnestied (Wikipedia, 2012d)

Throughout this period, fertility rates continued to be much higher among Americaâs non-white minorities than in the majority White population. For whatever reason, Blacks and Hispanics were not participating in the economic and cultural changes that had reduced White fertility.

The other Obama revolution

Non-White fertility has likewise fallen. Hispanic fertility in particular fell from a high of 2.86 children per woman in 2006 to 2.35 in 2010. The same period saw fertility declines in other population groups, with White Americans showing the smallest decline (Martin et al., 2012, see above chart). Preliminary data indicate that this convergence is continuing. In 2011, Hispanic fertility fell to the replacement level of 2.2:

If current trends continue, all of the major population groups will have fallen to about the same fertility rate by the time Obama leaves office. White Americans may even hold first place, their fertility being buoyed up by groups like the Mormons, the Amish, and the Hassidic Jews. Such a situation will be unprecedented in U.S. history.

One might object that these trends reflect the current hard times. True, but good times arenât coming back any day soon. American economic growth will be sluggish for at least the next decade and any attempt to do better will abort spectacularly, like the end of the Bush Boom. Because the U.S. is now a mature economy, it can no longer grow at the rates we once saw during the postwar era and now see in many developing countries.

In addition, the decline in non-White fertility doesnât seem to reflect only economic factors. Black American fertility was already falling during the 1990s and 2000s when economic conditions were much better, aside from a rise when Bush Jr. was pushing to expand minority home ownership. The same cultural factors that previously affected White fertility are now affecting all Americans, specifically a growing desire by women to marry later and limit their number of children.

What if a Republican had been in office?

Is this demographic reversal Obamaâs doing? Would it have happened anyway? We can best answer these questions by asking what a Republican president would have done, like McCain in 2008 or Romney in 2012.

First, the level of legal immigration would have been raisedâthat was in Romneyâs platform. Second, there would have been some sort of amnesty, not the same as Obamaâs proposal but very similar number-wise. Some 12 million illegal immigrants would have become eligible for an âearned path to citizenshipâ and any children born on American soil would have automatically gained U.S. citizenship.

Third, there would have been efforts to spur another round of high economic growth through easy credit and deregulation, like the Bush Boom of the past decade. Such a boom would have done little to raise the average workerâs wage, while doing a lot to spur another influx of low-wage labor for work in construction, agriculture, and services â¦ to mow the lawns of the rich and to build them ever more monster homes.

Finally, a Republican president would have sought to limit access to abortion, perhaps even seeking to overturn Roe vs Wade. There would almost certainly have been a move to cut off Medicaid funding for abortion and birth control.

Regardless of what happens, White Americans are headed for minority status, but that process now promises to be longer and more drawn out than previously thought â¦ thanks to the Obama presidency. Is this a case of his party naively acting against its own interests? Not really. Most Democrats arenât âanti-White.â Thatâs a trope that certain dog-whistling Republicans are pushing. Most Democrats just want to see all Americans get the same dealâthe same standard of living, the same quality of life, and the same freedom, including reproductive freedom.

Is that a naÃ¯ve goal? Perhaps. But is it more naÃ¯ve than the Republican goal of unlimited economic and demographic growth? If pre-2009 trends had continued, the U.S. population would have soared to almost half a billion by mid-century (Beck, 2010; Camarota, 2007).

Political choices arenât always clear-cut. Yes, Romney is light-skinned, but thatâs no guarantee that he cares about the future of White Americans. His interests coincide more with those of the corporate donors who keep the Republican Party afloat. Yes, Obama is dark-skinned, but he may still be a better choice for White folks worried about their future. To be sure, the Democratic Party is likewise influenced by corporate donors both directly and indirectly (via NPOs that are nonetheless corporate-funded), but it also has internal factions, like the union movement, that oppose the globalist project of outsourcing to low-wage countries and insourcing low-wage labor. Other factions, notably the environmentalists, are critical of unlimited growth. Finally, the different ethnic factions within the party donât form a monolithic bloc; infighting will happen, and one faction or another will make appeals for support from White Americans.

Clearly, both parties leave much to be desired. In politics, however, one sometimes has to choose between the terrible and the less terrible. As White Americans descend to minority status, they will have to learn to live by their wits.

Wikipedia (2012a). Immigration and Nationality Act of 1965http://en.wikipedia.org/wiki/Immigration_and_Nationality_Act_of_1965

Wikipedia (2012b). Immigration Reform and Control Act of 1986 http://en.wikipedia.org/wiki/Immigration_Reform_and_Control_Act_of_1986

A Look Back Over 2015
Peter Frost
• 96 Comments • Reply
← The Mysterious AinuOrigins of English Individualism →
Hide 21 CommentsLeave a Comment
"Obama: White America's Bogeyman?"
• 21 Comments
Commenters to Ignore
Commenters to ignore (one per line)

← The Mysterious AinuOrigins of English Individualism →
Current Commenter
says:
Current Date at Time Now
Leave a Reply - Comments on articles more than two weeks old will be judged much more strictly on quality and tone
Cancel Reply
Commenting Disabled While in Translation Mode

Who Profits from Pipeline Terror?
Secret talks between Russia and Germany to resolve their Nord Stream 1 and 2 issues had to be averted at any cost
Pepe Escobar • September 29, 2022
• 1,800 Words • 157 Comments • Reply