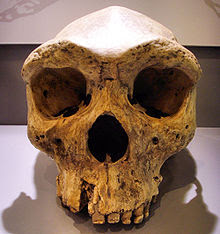 Broken Hill skull from Zambia, dated to 110,000 BP. It is often identified as a Homo sapiens, largely because it is so recent. We now have evidence that very archaic hominins inhabited central and southern Africa at least 35,000 years ago.

The past year has brought us a new model of human evolution. Itâs a modified version of âOut of Africa.â Present-day humans are now traced to a small founder group that began to expand some 80,000 years ago in East Africa and started to spread out of Africa some 50,000 to 40,000 years ago. Meanwhile, these early modern humans intermixed to varying degrees with the archaic hominins they replaced. There is thus 1 to 4% Neanderthal admixture in present-day Europeans and Asians, and 8% Neanderthal and âDenisovanâ admixture in Melanesians (Green et al., 2010; Reich et al., 2010).

What about Africans? Are they the only âpureâ humans? This is unlikely on theoretical grounds, as Hammer et al. (2011) point out in a newly released paper:

[â¦] the greatest opportunity for introgression was in Africa, where AMH [anatomically modern humans] and various archaic forms coexisted for much longer than they did outside of Africa. Indeed, the fossil record indicates that a variety of transitional forms with a mosaic of archaic and modern features lived over an extensive geographic area from Morocco to South Africa between 200 and 35 kya.

Africaâs warm climate tends to break down DNA quite rapidly. So weâll probably never get to reconstruct an archaic African genome from a tooth or a skeletal fragment. But we can look through modern African genomes for signs of introgression from an archaic source. The most telltale signs are unusual polymorphisms in noncoding regions.

Using this approach, Hammer et al. (2011) assign about 2% of the modern African genome to an archaic population that split from ancestral modern humans some 700,000 years ago. This admixture is dated to about 35,000 years ago and may have occurred in Central Africa, since the level of admixture is highest in pygmy groups from that region.

Who exactly were these archaics?

Beginning ?700 kya, fossil evidence from many parts of Africa indicate that Homo erectus was giving way to populations with larger brains, a change that was accompanied by several structural adjustments to the skull and postcranial skeleton (14). By ?200 kya, individuals with more modern skeletal morphology begin to appear in the African record (8, 14). Despite these signs of anatomical and behavioral innovation, hominins with a combination of archaic and modern features persist in the fossil record across sub-Saharan Africa and the Middle East until after ?35 kya [â¦] Interestingly, recent studies attest to the existence of Late Stone Age human remains with archaic features in Nigeria (Iwo Eleru) and the Democratic Republic of Congo (Ishango) (Hammer et al., 2011)

Did Homo erectus linger in parts of Africa until as late as 35,000 years ago? The idea is no longer science fiction. We have the example of the âhobbitsââa Homo erectus population that lasted at least as long in Southeast Asia.

Perhaps we should take a second look at the Broken Hill skull, which was found near Kabwe, Zambia and has been dated to 110,000 BP (Bada et al., 1974). Many anthropologists have raised it to sapiens status, largely on the assumption that non-sapiens were no longer around at that time. Yet it doesnât look at all like a Homo sapiens.

Broken Hill man probably occupied one end of a range of archaic groups that inhabited Africa on the eve of the âbig bangââthe demic expansion of early modern humans that began 80,000 years ago somewhere in East Africa. At the other end were late archaic hominins who looked just like early modern humans but still lacked some of the final changes to their neural wiring.

If sub-Saharan Africans have about 2% admixture from Homo erectus, they probably have much more from late archaic hominins, who were more numerous and behaviorally more similar. How great is this late archaic admixture?

According to Watson et al. (1997), about 13% of the sub-Saharan gene pool comes from a demic expansion c. 111,000 years ago that corresponds to the entry of Skhul-Qafzeh hominins into the Middle East. Although these hominins were almost anatomically modern, their technology was Mousterian and differed little from that of Neanderthals.

Some last-minute neural changes seem to have occurred between this expansion 111,000 years ago and the âbig bangâ 80,000 years ago. Perhaps these changes triggered the second expansion. As Atkinson et al. (2009) write:

What does it all mean?

Itâs interesting that we have varying degrees of archaic admixture. But what does it all mean? Did these different admixtures make us different in different ways?

The claim has been made that species owe much of their genetic variability to introgressive hybridization. However, all the evidence contradicts this conclusion so far as animals is concerned. Not only are F1 hybrids between good species very rare, but where they occur the hybrids (even when not sterile) are demonstrably of inferior viability. The few genes that occasionally introgress into the parental species are not coadapted [â¦] and are selected against. Introgressive hybridization seems to be a negligible source of genetic variation in animals.

In opposition to this view, Greg Cochran and John Hawkes have argued that gene introgression enabled early modern humans to adapt more quickly to new environments. Instead of starting from scratch, they just âcherry-pickedâ genes that had already been developed by the populations they were replacing.

All of this assumes there were cherries worth picking. Did archaic hominins have anything useful to offer? Modern humans and Neanderthals adapted to the same cold environment but they did so in very different ways. The former, for instance, made tailored clothing while the latter were probably as furry as bears.

The stage whisper is that the Neanderthals gave ancestral Europeans special brain genes, notably the latest microcephalin variant (Hawkes et al., 2008). We now know otherwise. The reconstructed Neanderthal genome has revealed no brain genes that our ancestors cherry-picked. As for African archaic hominins, itâs even less clear what they had to offer. These were groups that lived under similar climatic and ecological conditions.

The cherry-picking theory seemed like a great idea. How else could one explain the sudden cultural dynamism of early modern humans? This effervescence began only 30,000 to 20,000 years agoâlong after the âbig bang.â And it was most evident in southwestern Franceâa place far from East Africa. Surely the simplest explanation is gene introgression from European Neanderthals.

Well, things are never as simple as they seem. There are in fact other explanations:

2. France is a country with strong grassroots interest in history and prehistory. This is unfortunately not so elsewhere in the world, where the remote past is often viewed with indifference. Why does so much of our knowledge of the prehistoric Middle East come from Israel? Because Israel is chock-full of archeologists who do their work passionately and, in many cases, for free. We view human prehistory through the lens of present-day interests.

The Geography of the Noosphere
Anatoly Karlin
• 345 Comments
← Did the Slave Trade Make Africans Polyg...South Korea Abolishes Itself →
Hide 10 CommentsLeave a Comment
"No, They Aren't Pure Either"
• 10 Comments
Commenters to Ignore
Commenters to ignore (one per line)