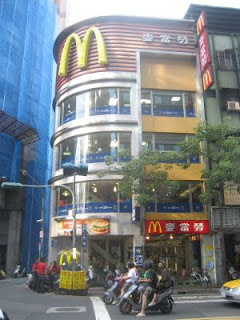 McDonaldâs in Taipei. By the 1990s, Taiwan had already become a âpost-nationâ (source)

East Asia has long been bucking the trend toward globalization. Its countries have become major players in the global marketplace, while jealously guarding their cultural specificity and national character.

But East Asia is now getting with the program. South Korea in particular has embraced the view that all factors of production, including its own people, should submit to the logic of globalization. Although the inflow of migrant labor is supposed to be a response to economic growth, there seems to be little relationship between the two. South Korea has actually had slower economic growth since the Asian crisis of the late 1990s, and yet these same years have seen a steady rise in immigration.

Economic growth in South Korea demanded a change to the solid mono-ethnic labour market, previously exclusive of other races. Migrant workers replaced departing Koreans at small and middle-sized factories, receiving low wages and doing intensive labour, mostly coming as âindustrial traineesâ at the beginning. But from around 1997, the so-called Asian economic crisis has left them in terrible conditions, being categorized as illegal and undocumented, without any official countermeasures from the Korean government. They were frequently arrested and deported from then. Nevertheless the number of foreign residents is increasing every year, except for 1998 [â¦]

None of this should be surprising. In a global marketplace, there is a strong incentive to cut the cost of labor, either by outsourcing production or by insourcing workers. This two-way process will continue until wage rates are more or less the same throughout the world. So it doesnât matter how low the wages are in labor-importing countries. What matters is whether the wages are even lower in labor-exporting countries. Such is the logic of globalization.

South Koreaâs example is now being followed by another East Asian countryâTaiwan. Here too, history seems to have paved the way for globalization. Before 1945, the Taiwanese were citizens of the Japanese Empire, even though most were culturally Chinese. They were thus already thinking of citizenship in âpropositionalâ terms, i.e., as adherence to a particular political system. This tendency was reinforced when the Chinese civil war ended and Taiwan became a place of refuge for the defeated Nationalists. Taiwanese identity thus became constructed in ideological terms â¦ in opposition to the Communists on the mainland.

At the same time, Taiwan took in large numbers of refugees from different parts of Mainland China with different dialects and traditions of their ownâan estimated 1 to 1.5 million. This experience would help prepare the Taiwanese for the current wave of non-Chinese immigrants:

Even before the advent of transnational capitalism, there has been steady influx of âoutsidersâ into postwar Taiwanese society, if one not only includes the gradual absorption of overseas Chinese (including from Hong Kong) but also the marginal existence of long resident foreigners (many of whom have married local spouses and settled into long term employment). To this, one can add in recent years the massive influx of contract laborers (Filipino maids, Thai construction workers, illegal PRC immigrants, expatriate businessmen and technical experts, etc.) as well as increased numbers of Chinese abroad lured back by super-salary jobs and Chinese youth raised abroad who have âreturnedâ to exploit the growing niche of professional work requiring English language fluency. All have in very different ways contributed to an increasingly diversified and transnational local Taiwanese economy, albeit accommodated within an ongoing stratified system. (Chun, 2001)

Another predisposing factor has been Taiwanâs special relationship with its main protector, the United States. Many of its political and economic leaders are graduates of American colleges and universities. On coming home, they propagate the same discourse that they earlier learned in the U.S.:

Multiculturalism is now âinâ. As a term of official discourse, the advent of âmulticulturalismâ (duoyuan zhuyi) seems to be a recent phenomenon that has culminated with, among other things, the election of the first President from the Taiwan independence minded opposition Democratic Progressive Party (DPP). (Chun, 2001)

School textbooks are being rewritten to emphasize this new perspective:

Narrative of immigration plays a pivotal role in the multiculturalism discourse. In a school textbook entitled ‘Understanding Taiwanâ, Taiwan enters the stage as such: âTaiwan is an immigrant society, from the Stone Age to the present, people coming here across many different times and places. Before the largest number of Han arrived on Taiwan, Aborigines were already hereâ (cited by Harrison: 2006: 195). It also teaches students that Taiwanâs history is characterised by a) multiple cultures; b) internationalisation; c) prosperous foreign trade; d) bravery, adventurousness, and endurance (Cheng, 2008)

The above predisposing factors have thus allowed a deeper penetration of globalist thinking than in, say, Japan. Nonetheless, globalism is gaining dominance throughout the world. It is perhaps an inevitable stage of capitalism where the business community has freed itself from the nation state and pursues solely its own self-interest:

Foreign labor in general is not a new phenomenon to global capitalism, which was in fact responsible for orchestrating the first major waves of ethnic migration in human history. However, the role of foreign labor has clearly been transformed by the current phase of transnational capitalism, characterized by disorganized flows of capital and labor, borderless economies and the withering away of nationalist protectionism of various sorts, not to mention the most recent evolution of supra-national economic zones, such as EEC and NAFTA. (Chun, 2001)

Yet East Asia is one region where we may see pushback. At first thought, this prospect seems unlikely. The local political and economic elites have converted massively to globalism. Moreover, there doesnât seem to be any possible ideology of oppositionâother than communism, which is widely discredited even in Mainland China. To a large extent, this is what we see elsewhere: globalism has co-opted the entire political spectrum from the left to the right.

Chun (2001) nonetheless predicts that a movement of opposition will develop in Taiwan, ironically out of multicultural discourse, specifically its indigenist component. Although indigenism has primarily served to defend the native Austronesian tribes of eastern Taiwan, it is now also being used to portray the Taiwanese as an indigenous nation, in opposition to the Peopleâs Republic of China. At a time when the PRC has embraced the global market economy, the Taiwanese political leadership is turning towards indigenist rhetoric as the sole remaining means of legitimizing their countryâs existence.

According to Chun (2001), Taiwan was already showing all the signs of a âpost-nationâ by the 1990s: social atomization, disinterest in cultural and kinship affiliation, emergence of the market as the main organizing principle of society, etc. Multicultural/indigenist discourse can do nothing to push Taiwan farther in that direction, but it can do much to reawaken national consciousness. âAt a deeper level, both (cosmopolitan) “transnationalism” and (indigenous) “multiculturalism” are in my opinion largely incompatible and mask an imminent future crisisâ (Chun, 2001).

Globalism today enjoys a predominance in East Asia that is both monolithic and superficial. Although it has a stronger hold on the elites and on the general population than in the West, this adherence has no deep roots in the underlying culture. In the West, by contrast, globalism has been grafted onto a pre-existing tradition that is much more compatible. There is notably Christianity and its commitment to mission work throughout the world. There is also the emotional heritage of imperialism and colonialism. Although the West lost its colonies more than a half-century ago, many Westerners still feel connected to them and responsible for them.

This cultural substrate is largely, if not wholly, absent in East Asia. When, and if, pushback begins there, resistance will likely collapse after initially strong resistance.

Cheng, I. (2008). Immigrants and National Identity of Taiwan: A Preliminary Study on Multiculturalism Practice
http://www.soas.ac.uk/taiwanstudies/eats/eats2008/file43182.pdf

Chun, A. (2001). The coming crisis of multiculturalism in âtransnationalâ Taiwan, New Cultural Formations in an Era of Transnational Globalization, Academia Sinica, Taiwan, Oct 6-7, 2001

The Geography of the Noosphere
Anatoly Karlin
• 345 Comments
← Reflections on the Revolution in South ...East Asia at the Crossroads →
Hide 36 CommentsLeave a Comment
"The Next East Asian Domino"
• 36 Comments
Commenters to Ignore
Commenters to ignore (one per line)

← Reflections on the Revolution in South ...East Asia at the Crossroads →
Current Commenter
says:
Current Date at Time Now
Leave a Reply - Comments on articles more than two weeks old will be judged much more strictly on quality and tone
Cancel Reply
Commenting Disabled While in Translation Mode