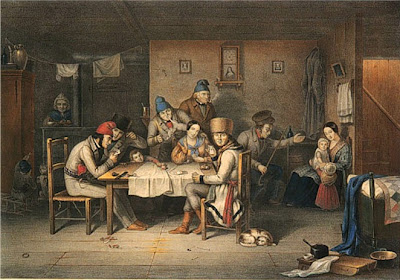 French Canadian habitants playing at cards (Cornelius Krieghoff). With fewer British merchants than elsewhere, eastern Quebec was a land of opportunity for business-minded French Canadians. Did this selection affect the local gene pool?

1. It is highly localized geographically, being concentrated in eastern Quebec. In Rimouski, the heterozygote frequency is 7.6%, versus 4.2% among Ashkenazi Jews and 0.3% among French Canadians in Montreal (De Braekeleer et al, 1992).

2. It is caused by two separate mutations: one that arose on the north shore of the St. Lawrence (Charlevoix and Saguenay-Lac Saint-Jean) and another that arose on the south shore (Bas Saint-Laurent) (Zlotogora, 1994).

3. It is relatively recent in origin, being absent in France. Neither mutation can be more than three centuries old and both probably postdate the British conquest of Quebec (1759).

These three characteristics argue for some kind of selective advantage, and not a random founder effect. Among Ashkenazi Jews, the selective advantage seems to be improved mental processing. Indeed, Tay Sachâs is one of four different genetic illnesses that are unusually common among Ashkenazim and that affect the same metabolic pathway in brain tissues (lysosomal storage). Homozygotes suffer neurological degeneration, mental retardation, and other neural problems. Heterozygotes, however, may be better at mentally demanding occupations (Cochran et al., 2006; Frost 2007; Murray, 2007; Zlotogora, 1994).

The mucolipidoses are composed of four distinct clinical conditions (designated type IâIV) that result from the accumulation of lipid and carbohydrate molecules due to specific lysosomal enzyme defects. (…) In the absence of this step, lysosomal enzymes are incorrectly routed into the extracellular space. This disorder is rare, with an estimated incidence of 1 in 640 000 births, although it may be higher in Saguenay-Lac-St Jean, a French Canadian isolate. (Ekstrand & Sankar, 2009, p. 603)

Are lysosomal storage illnesses common in eastern Quebec for the same reason that they are common among Ashkenazi Jews? At first thought, the idea may seem absurd. Werenât French Canadians historically a nation of farmers? And didnât British merchants fill all of the mentally demanding occupations?

In reality, things were not so simple. There was always a French-Canadian middle class, particularly wherever British merchants were few and far between. They were especially rare in those parts of eastern Quebec that today have high rates of Tay Sachâs (Charlevoix, Saguenay-Lac Saint-Jean, Bas Saint-Laurent). This rarity came to the notice of Alexis de Tocqueville while passing through Bas Saint-Laurent in 1831:

In this portion of Canada, one does not hear English at all. The population is only French, and yet when one encounters an inn, or a merchant, the sign is in English. (De Tocqueville, 2003, p. 185).

This lack of English competition opened up an enviable niche for French Canadiansâor rather for those with the right aptitudes, especially in numeracy, literacy, and bilingualism. Elsewhere, these niches were filled by British immigrants, particularly in Montreal, Quebec City, the Eastern Townships, the Ottawa valley, and the southern and eastern shorelines of the GaspÃ© Peninsula.

This point is made in a study of the life of John Guay (1828-1880), a leading French Canadian merchant in the Saguenay region. To enter this occupational niche required a special mental toolkit:

Success in trade was never easy because of the competition, the fragility of the markets, and the instability of business conditions. The ablest managed to live or survive. Others, the greatest number, closed shop after a few years. Only those possessing exceptional qualities would make a fortune. (Lapointe, 1996, p. 3)

But the payoff was huge. John Guay had ten children who survived to adulthoodâtwice the mean reproductive success of his French Canadian contemporaries. Lapointe (1996, p. 126) attributes Guayâs success in business to the mental outlook he displayed from an early age:

The evolution of market capitalism has given rise to rules that a businessman cannot evade. One cannot simply improvise as a merchant. It takes talent and of course capital. Spontaneous generation was very uncommon in 19th-century Quebec, indeed nonexistent in John Guayâs case. The family environment in which he grew up predisposed him to develop an interest and also aptitudes for the businesses of trade, forestry, and farming. His successful career henceforth proved that a French-Canadian merchant could ably penetrate the world of business; a world where, let us remember, English Canadians controlled most of the commercial and industrial activities.

One region in eastern Quebec, however, has always been solidly French Canadian and yet has low incidences of Tay Sachâs and mucoliposes. This is Beauce County, a region south of Quebec City that covers the ChaudiÃ¨re valley up to the American border. Furthermore, Beaucerons are stereotyped as being self-reliant, business-minded go-gettersâthe âYankeesâ of Quebec.

Beauce County nonetheless differs demographically from the rest of eastern Quebec in one respect. Settlement began earlier there than elsewhere, well before the Conquest. There was thus a larger pool of people and hence more individuals who could fill the niches that opened up after the Conquest, as Quebec moved from a semi-feudal mercantilist society to a more market-driven economy. Selection thus had more leeway to favor individuals who had the necessary aptitudes while not suffering the costs that lysosomal storage illnesses impose on homozygotes.

All of this might seem hard to believe. How could such selection operate over a time span of less than two centuries? Yet that is what the data tell us. Neither of these Tay Sachâs mutations is present in France. They must have gone from zero to their current high prevalence in less than ten generations.

← Hue and Luminosity of Human Skin: A Vis...Human Nature or Human Natures? →
Current Commenter
says:
Current Date at Time Now
Leave a Reply - Comments on articles more than two weeks old will be judged much more strictly on quality and tone
Cancel Reply
Commenting Disabled While in Translation Mode