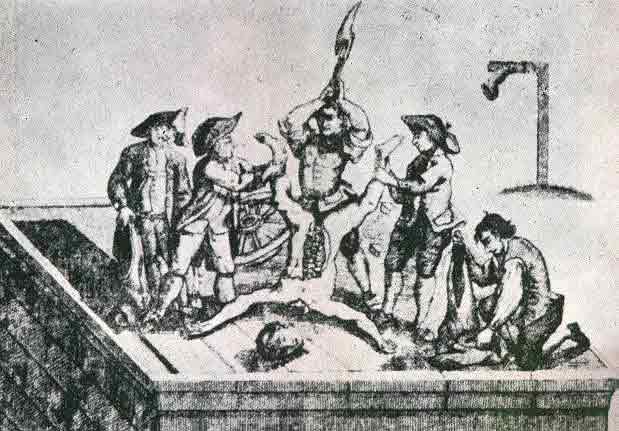 Although the Middle Ages were, in the imagination of our contemporaries, âthe time of the gallows,â the reality was appreciably different (Carbasse, 2011, pp. 38-39)
Like many well-meaning people, I once considered the death penalty a relic of a more barbaric age. Outside the old jailhouse, here in Quebec City, I can see the open space where people used to be hanged â¦ in public. In some cases, the authorities would go one better. The body would be placed in a cage and suspended near a thoroughfare for all to see â¦ while it decomposed. This was our past, and presumably the system of justice was even more gruesome longer ago.

Actually, it wasnât. Longer ago, the death penalty was not the preferred punishment for murder.

When the Roman Empire collapsed in the 5th century, so did its system of retributive justice. Actually, justice had already become less retributive through the growing influence of Christianity. This is apparent in a letter from a Roman magistrate who felt troubled by the death penalty and sought advice from Ambrose, bishop of Milan (374-397). In a long reply, the bishop defended this punishment, but then went on to praise those who refrain from it. In fact, most of his reply was an appeal for mercy on the grounds that the wrongdoer may end up repenting (Swift, 1970, p. 542, see also Frost, 2010).

This trend continued after the Empireâs collapse. In 511, the bishops of France greatly extended the right of sanctuary. If a man committed murder, he could now ask for and receive sanctuary in any holy place. This policy was defended by Pope Gregory the Great: âLet the Church extend its protection even to those who have spilled blood, for it must not contribute, even indirectly, to the shedding of their own bloodâ (Carbasse, 2011, p. 34).

The new barbarian rulers also disliked the death penalty, but for different reasons. There was a strong feeling that every adult male had a right to use violence and to kill, if need be. This right was of course reciprocal. If you killed a man, his death could be avenged by his brothers and other male kinsmen. The prospect of a vendetta thus created a âbalance of terrorâ that kept violence within limits. So, initially, the barbarians allowed capital punishment only for treason, desertion, and cowardice in combat (Carbasse, 2011, p. 35).

As the barbarian kingdoms developed on the ruins of the Roman Empire, steps were taken to limit male violence, particularly when it took the form of vendettas. This was the aim of the Salic Law, proclaimed in 507-511:

[The Salic Law] is a pact (pactus) âconcluded between the Franks and their chiefs,â for the specific purpose of ensuring peace among the people by âcutting short the development of brawls.â This term evidently means private acts of vengeance, the traditional vendettas that went on from generation to generation. In place of the vengeance henceforth forbidden, the law obliged the guilty party to pay the victim (or, in the case of murder, his family) compensation. This was an indemnity whose amount was very precisely set by the law, which described with much detail all of the possible damages, this being to avoid any discussion between the parties and make [murder] settlements as rapid, easy, and peaceful as possible. [â¦] This amount was called the wergild, the âprice of a man.â The victimâs family could not refuse the wergild, and once it was paid, the family had to be satisfied. They no longer had the right to avenge themselves (Carbasse, 2011, pp. 33-34).

The punishment for murder was thus monetized. If you killed a boy under 10, you paid 24,000 denars. Killing a free pregnant woman would cost a bit more: 28,000 denars. The payment was only 12,000 denars for killing a Roman who ate in the kingâs palace (source). Capital punishment existed only for the murder of the king, for whom there was no wergild, or in the case of a slave killing a free man.

Over the next few centuries, attempts were made to broaden the scope of the death penalty but to little avail, partly because law enforcement was still rudimentary and because of resistance from the Church:

[â¦] the couple âpeace and charityâ remained the supreme objective. This ideal had practical applications, since the legal forms of this time offered model agreements called âpeaceâ or âconcordsâ (today we would say âplea bargainingâ) for even major crimes like murder. Clearly, the public justice system was used only in exceptional cases, the usual way of settling disputes being private in nature (Carbasse, 2011, p. 36).

The war on murder â 12th to 17th centuries

Thus, for a long period, murder was normally a personal matter to be settled by the victimâs family, through vengeance or a cash settlement.

This situation began to change in the 12th century. One reason was that the State had become stronger. But there also had been an ideological change. The State no longer saw itself as an honest broker for violent disputes that did not challenge its existence. Jurists were now arguing that the king must punish the wicked to ensure that the good may live in peace. The Church itself was coming around to this view through what may be called a medieval synthesis of Christian morality:

[â¦] a reaction arose beginning in the 11th century against the previous system of monetary compensation. Henceforth, increasingly, it was felt that money could not be a sufficient compensation for such an infraction. The idea that the murder of a man is a crime too serious, an offence too manifest to the order of Creation, to be simply âcompensatedâ by a sum of money was present from the early 11th century onward in the thinking of some bishops (Carbassse, 2011, p. 38)

And so began the war on murder. From the 12th to 17th centuries, capital punishment became steadily more prevalent. We see this in an increasing willingness to use it not only for murder but also for other crimes (rape, abortion, infanticide, lÃ¨se majestÃ©, theft, counterfeiting, etc.). We also see this in the use of âexemplaryâ punishment: drawing and quartering, breaking on the wheel, and burning. Beginning in the 13th and 14th centuries, we see cases of a murderer being buried alive in a casket placed underneath the victimâs casket (Carbasse, 2011, p. 53).

Then, after the 17th century, the war on murder began to go into reverse. It had been largely won, and public sympathy now shifted to the condemned man. In England, the homicide rate fell by over a hundred-fold between 1300 and 1900 (Eisner, 2001). Europeans were becoming kinder and gentler, and this pacification of social relations would make possible much of what we call modernity: the expansion of the market economy; a growing freedom to live among total strangers; the rise of the individual as an autonomous, self-maximizing being, and so on.

But this pacification also had a down side. We now take it for granted. If people act violently, to the point of committing murder, we assume there must be a very good reason. Otherwise, why would they have done it?

The Lack of Progress in Science: Sex Differences
Razib Khan
• 98 Comments
← Just for Show?How the Pacification of Europe Came to ... →
Hide 20 CommentsLeave a Comment
"Making Europeans Kinder, Gentler"
• 20 Comments
Commenters to Ignore
Commenters to ignore (one per line)

← Just for Show?How the Pacification of Europe Came to ... →
Current Commenter
says:
Current Date at Time Now
Leave a Reply - Comments on articles more than two weeks old will be judged much more strictly on quality and tone
Cancel Reply
Commenting Disabled While in Translation Mode