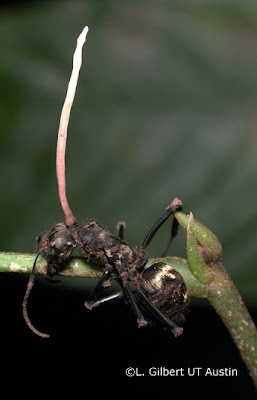 Time to die. This parasitic fungus begins as a spore on an antâs body. It germinates, grows inside its host and eventually directs the antâs brain to climb a plant and clamp its mandibles around a leaf or stem. The fungus then kills its host.

It wonât be such a bad year. Stock markets will reach record highs and pundits will say weâve entered a sustained boom. For many people, life will never again be so good as it will be this year.

The main worry will be price rises for many commodities. With a return to even modest rates of economic growth, demand will outstrip supply in several areas. Talk of âpeak oilâ will be joined by concerns over âpeak foodâ and âpeak water.â Serious water shortages will hit the American southwest and southeast.

There will also be concern over the decline in physical infrastructure, i.e., roads, bridges, and the like. Most of this infrastructure was built during the postwar boom of the 1950s and 1960s. Now itâs falling apart.

Finally, there will be concern over behavioral infrastructure, albeit less openly expressed. The market economy may be self-generating, but it doesnât self-generate in a vacuum. As the historical economist Gregory Clark has shown, the market economy began to develop once a certain behavioral profile had become the normâabove all, a commitment to honesty and a rejection of violence and theft as means of self-enrichment. If the current population is replaced by one where people casually cheat and steal, transaction costs will escalate throughout the economy. A lot of economic activity will simply cease to be cost-effective.

Economists are afraid that a sharp rise in interest rates will abort the present recovery. Or a sharp rise in commodity prices. Frankly, Iâm more worried about the behavioral changes.

Yes, humans are ingenious creatures. Weâll undoubtedly think of something. Nonetheless, the coming decade will confront us with several different challenges. Do we have enough fingers to plug all the holes in the dike? Iâm not so sure, especially given the obliviousness of our political and economic elites.

Anyway, these problems wonât really bite until the second half of the decade. So enjoy life.

In short, the human face is a special visual object. We donât learn to recognize it. Instead, the brain has a hardwired capacity for face recognition. This point is no longer debated. Controversy begins when we turn to the elements of this hardwired facial schema.

It is increasingly apparent, especially with recent work by Richard Russell and by FrÃ©dÃ©ric Gosselinâs research team, that one key element is skin tone, specifically facial coloration and luminosity. This visual element is apparently used to distinguish between male and female faces.

In pursuing this line of research, we should above all:

– locate the region of the brain that harbors this mental module. Gosselinâs team suggest that the location may be in the infero-temporal cortex, which handles both face perception and color perception. The best approach would likely be a real-time MRI study.

– show that this mental capacity is indeed hardwired and not learned. The best approach would be a twin study, such as Zhu et al (2009) used to show that face recognition is hardwired.

– identify other areas of cognition and behavior (sexual attraction, emotional distancing, etc.) that may be influenced by the output of this module.

The challenge here is not so much funding as access to special resources (real-time MRI brain scanning, large pools of identical and fraternal twins, etc.). And beyond that challenge lies another one: persuading other academics that this line of research is worth pursuing.

This year, I hope to write posts on the following two topics. Depending on what turns up, these posts may eventually become publishable articles.

I will argue that a likely candidate for parasite manipulation in our species is vaginal yeast, specifically the more aggressive strains associated with vulvovaginal candidiasis. This parasite has evolved the capacity to cross the blood/brain barrier and may manipulate certain neural circuits in both the female host and her regular male partner.

A new cold war? When the Cold War ended some two decades ago, it seemed that we had come to the âend of history.â All nations now agreed on the best social system: a free market economy combined with certain communitarian values (the family, the local community, the nation, etc.).

Yet, after a period of apparent convergence, the world is once more repolarizing into two opposing blocs. In the Eastern bloc, the decline of Marxism-Leninism has allowed a resurgence of pre-revolutionary social values, often with the encouragement of the State. Meanwhile, these same values are withering away in the Western bloc. Our ideal is now the self-defining individual who freely operates within a post-national, post-gender, and post-family world. But this freedom does not include the right to adhere to older social values. Such adherence is increasingly scorned as pathological, if not criminal.

This repolarization is especially visible on the Korean peninsula, where it is fueling renewed tensions. Will we see a Second Korean War? And will this war escalate into a larger, more global conflict?

Clark, G.. (2007). A Farewell to Alms. A Brief Economic History of the World, Princeton University Press, Princeton and Oxford.

Dispatches from the New Cold War
Fred Reports from Foxhole
Fred Reed
• 469 Comments • Reply
← Hue and Luminosity of Human Skin: A Vis...On Neanderthals, Denisovans, and Other ... →
Hide 28 CommentsLeave a Comment
"Looking Forward to 2011"
• 28 Comments
Commenters to Ignore
Commenters to ignore (one per line)

← Hue and Luminosity of Human Skin: A Vis...On Neanderthals, Denisovans, and Other ... →
Current Commenter
says:
Current Date at Time Now
Leave a Reply - Comments on articles more than two weeks old will be judged much more strictly on quality and tone
Cancel Reply
Commenting Disabled While in Translation Mode