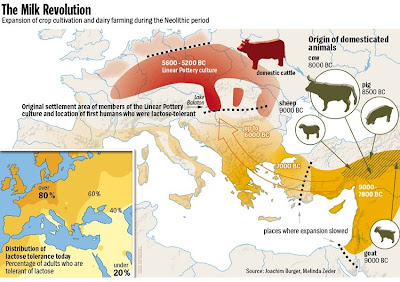 New research has revealed that agriculture came to Europe amid a wave of immigration from the Middle East during the Neolithic period. The newcomers won out over the locals because of their sophisticated culture, mastery of agriculture — and their miracle food, milk.
(Schulz 2010)

This recent Der Spiegel article has stirred up comment in the blogosphere (Hawks 2010, Khan 2010, Sailer 2010). It argues that Europeans do not descend from the reindeer hunters who once roamed the continent during the last ice age. Nor do they descend from the more recent hunter-fisher-gatherers of the Mesolithic. All of those people went extinct. They were replaced by the real ancestors of present-day Europeansâfarmers who began to spread out of the Middle East only 9,000 years ago and who reached northern Europe two millennia laterâalmost at the dawn of history!

If you have any doubts, this finding is based on âa barrage of articles in professional journals like Nature and BMC Evolutionary Biology, [whose authors] have turned many of the prevailing views upside down over the course of the last three years.â

There is nothing wrong with the above journal articles. A lot is wrong, however, with the Der Spiegel article. It neatly confuses two separate findings, only one of which supports the âpopulation replacementâ hypothesis.

1. Origins of the European allele for adult digestion of lactose

Unlike most humans, Europeans can digest milk sugar (lactose) as adults. This is made possible by an allele that allows adults to produce an enzyme, lactase, that breaks down milk sugar. So where did this allele come from? Did it originate in Europe or in some place outside Europe?

According to Der Spiegel:

But where did the first milk drinker live? Which early man was the first to feast on cow’s milk without suffering the consequences?

In a bid to solve the mystery, molecular biologists have sawed into and analyzed countless Neolithic bones. The breakthrough came last year, when scientists discovered that the first milk drinkers lived in the territory of present-day Austria,
Hungary and Slovakia.

The reader is left with the impression that the new allele had been brought to Europe from the Middle East. That impression is false. In fact, the above molecular biologists found no trace of this allele in DNA retrieved from the earliest European farmers. It apparently arose later as a mutation and then spread among Europeans through natural selection.

[â¦] the absence of the 13.910*T allele in our Neolithic samples indicates that the early farmers in Europe were not yet adapted to the consumption of unprocessed milk. Dairying is unlikely to have spread uniformly over Europe, and the use of milk in the Early Neolithic may have been rare. Although our data are consistent with strong selection for LP [lactose persistence] beginning with the introduction of cattle to Europe ?8800 B.P., it is unlikely that fresh milk consumption was widespread in Europe before frequencies of the 13.910*T allele had risen appreciably during the millennia after the onset of farming.
(Burger et al. 2007)

Consequently, this area of research argues against the Der Spiegel article. Europeans did change genetically, but the change occurred through natural selection, not through population replacement (1).

Researchers have also retrieved mitochondrial DNA from Europeâs late hunter-fisher-gatherers and early farmers. Comparison shows a sharp genetic divide between the two groups. In particular, the first group had high incidences of haplogroup Uâa genetic lineage that was rare among early farmers and still is among present-day Europeans.

The past year, however, has brought evidence of genetic continuity. After studying 92 Danish human remains that range in time from the Mesolithic to the Middle Ages, Melchior et al. (2010) found that high incidences of haplogroup U persisted among the earliest farmers and declined only in later groups.

Thus, the sharp genetic divide was not between late hunter-fisher-gatherers and early farmers. It seems to have been between the earliest farmers and groups that had been farming for at least a millennium or so. Once again, the evidence points to natural selection, and not to population replacement.

But isnât mtDNA unresponsive to natural selection? Thatâs what I and others used to think. There is growing evidence, however, that some mtDNA loci can change in response to natural selection. In particular, some haplogroups seem to reflect a tradeoff between thermogenesis and ATP synthesis (Balloux et al 2009). If true, the decline of U-type haplogroups among early farmers may reflect the differences in physical activity (leading to overheating or underheating) that exist between hunting/fishing/gathering and farming.

The jury is still out. The evidence, however, seems to be tilting toward natural selection and away from population replacement as the best way to explain these genetic changes among ancestral Europeans. In short, the Der Spiegel article is bad science.

1. Towards the end, the Der Spiegel article seems to acknowledge that the allele for adult digestion of lactose must have arisen after farming had spread to Europe:

Some [farmers] had genetic mutations that enabled them to drink milk without getting sick. They were the true progenitors of the movement.

As a result of “accelerated evolution,” says Burger, lactose tolerance was selected for on a large scale within the population in the space of about 100 generations. Europe became the land of the eternal infant as people began drinking milk their whole lives