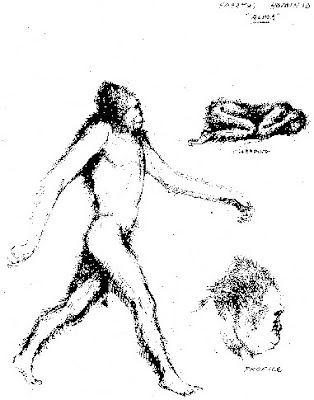 About 80,000 years ago in East Africa, some human populations began to expand rapidly at the expense of others. This process culminated in a massive expansion that started spreading to other continents some time after 60,000 BP (Watson et al., 1997).

This population expanded at the expense of more archaic humans. In Europe at least, there was initially some sort of cultural contact between the two groups, perhaps trade. But the modus vivendi did not last. All of the archaic humans went extinct and now exist only in bone fragments. They lost out in the struggle for existence.

In recent years, researchers have breathed new life into these old bones by retrieving mtDNA and even nuclear DNA from them. This retrieval is well under way with respect to the European Neanderthals. We should soon have a full reconstruction of their genome and, eventually, a good idea of what they looked like and perhaps how they felt and thought.

For now, this new research tool is being used to trace the geographic range of the Neanderthals. We have long known that they lived as far east as Central Asia. Recently, their mtDNA was found in human remains from the Altai Mountains of southern Siberia. Some paleontologists then suggested that all archaic humans across Eurasia would turn out to be Neanderthals of one sort or another.

Now, things no longer look so simple. When Krause et al. (2010) examined a bone fragment from another site in the Altai Mountains, only 100 km farther away, the mtDNA revealed a very different kind of archaic humanâgenetically almost twice as far from modern humans as the Neanderthals were.

This is puzzling, to say the least. Three kinds of humansâHomo sapiens, Homo neanderthalensis, and now Homo altaiensis (?)âapparently lived within the same geographic area roughly 30,000 to 50,000 years ago. As a rule, three closely related species can co-exist only if they inhabit different ecological niches. Otherwise, one of them will eventually push out the others.

The puzzle may be more apparent than real. Although southern Siberia has yielded evidence of Upper Paleolithic technology up to 40,000 years old, the oldest remains of modern humans date only to a little over 20,000 years ago (Goebel, 1999). We know that some European Neanderthals acquired technological innovations through their initial contacts with modern humans (Hoffecker, 2002, pp. 64, 66, 143, 159, 161-162, 171, 190). Perhaps these innovations spread from the contact zone in Europe to Neanderthals as far away as Siberia.

This still leaves us with a mÃ©nage Ã  deux. Or perhaps the recent Altai find was just another kind of Neanderthal. John Hawks (2010) suggests that Siberia may have been a more genetically diverse area within the Neanderthal range. We see a similar situation in modern humans: our gene pool is much more diverse in sub-Saharan Africa than elsewhere, with the result that many mtDNA variants are unique to that continent.

(Off-topic: Keep in mind that most of this genetic diversity is useless. Weâre talking about diversity in genes of little or no selective importance. If we look only at genes that have strong real-world effects, there should not be more genetic diversity in one geographic area than in anotherâunless something in the real world, like selection or intermixture, has been driving that diversity).

But why would Siberian Neanderthals be more genetically diverse than their European cousins? If we look at modern humans, we see that Africans have a high level of genetic diversity because they have stayed longer in one place than all other modern humans. In contrast, Europeans and Asians descend from smaller and more recent founder groups that budded off and left Africa, thereby taking only a fraction of the total genetic variability with them.

Were European Neanderthals an offshoot from an ancestral population in Siberia? Iâm not so sure. Given that ancestral Neanderthals ultimately came from Africa, as part of an earlier expansion of archaic humans, why would this expansion have reached Siberia before Europe?

Well, perhaps they reached Europe first and then experienced population crashes specific to that region, the result being a localized reduction in genetic diversity. This leaves unexplained why such crashes would have happened more often in Europe than in Siberia. Indeed, Siberiaâs climate spans a wider range of temperatures and is thus likelier to generate the extreme conditions that lead to population crashes.

So John Hawks is possibly right. Probably? No.

One other explanation remains. This is truly another kind of human. Interestingly, there are accounts of a human-like creature that used to roam the Altai Mountains and other highlands of southern Siberia. Called Almas, it supposedly stood five to six and a half feet tall, had reddish-brown hair over its entire body, and possessed a face with a pronounced brow-ridge, flat nose, and weak chin. It may have been part of a larger group of archaic humans that inhabited the mountainous regions of Central Asia, including the yeti of the Himalayas.

Van Deusen (2001) mentions that the Tungus peoples of far eastern Siberia often refer to the past existence of “monkey” people in their region. One folk-tale describes how these “monkeys” once abducted a man:

So the older sister took the shaman’s drum. She started to sing and then said, “Brother, when you go hunting in the taiga tomorrow, you’re going to meet two people. Check out their breasts, and then marry them.”

The next day, he woke up and set out to go hunting. He walked and walked and came to a hill, a mountain. There were big rocks. He looked up, and then went on. Suddenly he saw two people sitting there. He approached and at that time the ties on his skis broke.

He came up to those people and felt their breasts and they were women. And they took him along with them.

At home time went by. A day passed and another, and still he was gone. Many days went by. And then the younger sister said, “Sister, you made this happen. Now you bring him back. Those two monkeys in the mountain came and took him away and now they are keeping him in the mountains, sucking his blood. He’s become just skin and bones.”

â¦ So the younger sister sang and drummed, flying to her spirits, but she couldn’t get there. She tried a second time and still didn’t have the strength. The third time she gathered all her strength and flew to those rocks. She took her brother and dragged him out of there. He flew, looking thin as a shirt. They got him back and healed him. And that’s how the younger sister brought her brother back from those monkeys.