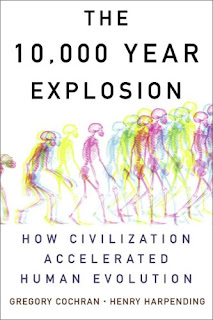 You want to publish a book about HBD? Youâll have to find a wealthy patron.

Debate is continuing over Ron Unzâs article on Race, IQ, and Wealth. In a favorable review at Living Anthropologically, the following comment caught my eye:

Unz has money, and he uses it to publish and promote. Unz apparently gave out at least $500,000 to Gregory Cochran, co-author with Harpending on The 10,000 Year Explosion: How Civilization Accelerated Human Evolution and with John Hawks on Recent acceleration of human adaptive evolution.

Raised eyebrows … And those people arenât the only ones. Ronâs 2009 tax return mentions donations to Steve Sailer and Razib Khan, among others (Unz, 2009).

Once upon a time academics got grants or sabbaticals for book writing. But that option is becoming less and less feasible if you want to write about human biodiversity. Getting your manuscript published is even more problematic. In the past, you could submit it to a publishing house and they would have it assessed by an expert in the field. Today, that system is almost extinct, at least in North America. You must go through a âliterary agentâ who will pitch your manuscript at wine and cheese parties. Itâs a system that is highly prone to abuse: schmoozing, petty bribery, and sleeping with the right people.

There are only two other options: publish on a shoestring budget or find a wealthy patron. Like Ron Unz. But what do you do when your patron starts promoting ideas you feel are wrong? Do you say nothing? Or do you bite the hand that feeds you?

The act of giving money is not wholly altruistic. Implicitly, it can become a form of control. The receiver thinks twice before doing anything that might offend the giver. And the giver may drop hints â¦

– Emily Sohn has recently interviewed me for an article in Discovery News. See here.

– A journal article will soon come out on the relationships between blue eye color and feminization of facial structure. This finding is consistent with other evidence of sex linkage for non-brown eyes and non-black hair. Indeed, a twin study has shown that hair is, on average, lighter-colored in women than in men, with red hair being especially more frequent in females. Women also show greater variation in hair color (Shekar et al., 2008). All of this, in turn, is consistent with a selection pressure, possibly sexual selection, that has acted more strongly on European women than on European men to diversify the palette of human hair colors.

Anon. (2012). Race IQ â Game Over: It was always all about wealth, August 9, Living Anthropologicallyhttp://www.livinganthropologically.com/2012/08/09/race-iq-game-over/

Race Denial vs. Racism - A False Dichotomy
Anatoly Karlin
• 117 Comments
← What You Don't Know Can Hurt YouOn Global Inequality →
Hide 18 CommentsLeave a Comment
"He Who Pays the Piper ..."
• 18 Comments
Commenters to Ignore
Commenters to ignore (one per line)

← What You Don't Know Can Hurt YouOn Global Inequality →
Current Commenter
says:
Current Date at Time Now
Leave a Reply - Comments on articles more than two weeks old will be judged much more strictly on quality and tone
Cancel Reply
Commenting Disabled While in Translation Mode