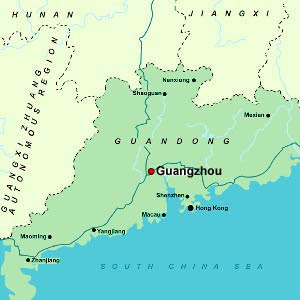 In my previous posts, Iâve argued that China is entering a demographic transition that is already occurring in other developed countries, i.e., decline of the indigenous population and progressive replacement by higher-fertility immigrants. In this post, Iâll focus on how the initial phase will play out over the next ten years.

The China of tomorrow can be seen in the city of Guangzhou, formerly known to Westerners by the name of Canton. In the past five years, it has taken in a large immigrant community, essentially from sub-Saharan Africa. How large? The Chinese authorities have no estimates, at least not officially. Bodomo (2009) suggests a total of over 100,000. He also mentions sizeable African communities in Beijing, Shanghai, Hong Kong, and Macao. According to Li et al. (2007), Africans started showing up in Guangzhou after 1998 and their numbers began to take off in the mid-2000s, although the increase seems to have slowed with the current recession. Rennie (2010) likewise suggests a figure of 100,000:

The dream of riches has fuelled a boom in the number of African migrants to Guangzhou. Immigration has increased by one-third each year since 2003, as word spreads that there is money to be made. There are now an estimated 20,000 Africans legally resident in the city â predominantly West African, young and male â and an unknown number of illegal residents and short-term visitors could swell the figure toward 100,000.

This community will likely grow further in the coming decade. The Chinese authorities may try to slow its growth through a carrot-and-stick approach: some kind of amnesty together with a beefing up of immigration control. Such half-measures will probably fail. Illegal immigrants can simply hide among the many who now have legal status. In any case, efforts to round them up will inevitably produce ugly incidents that could harm Chinaâs special relationship with sub-Saharan Africaâher leading source of raw materials. Such measures could strike Africans as being hypocritical:

Thereâs an irony here. For years, Chinese business, from oil producing giants to individual entrepreneurs, have been encouraged to set up shop in Africa and foster trade relations. In 2007, China invested US$7âbillion in the continent. In their destination countries, Chinese are welcomed with open arms. [â¦] That warm welcome has not been reciprocated in Guangzhou, where African businessmen have
few rights and little legal protection. (Moxley, 2009)

This relationship with Africa will become all the more crucial over the coming decade. China already imports a third of her crude oil from Africa and that figure could easily rise to a half. At that point, the tail will start wagging the dog. Even a temporary cessation of African oil would severely hurt the Chinese economy.

So, five years hence, the African community in Guangzhou will likely have swollen to over 300,000. Similar communities will have taken root elsewhere in southern China. By then, both push and pull factors will come into play. The push factor: hundreds of millions of potential migrants in a zone stretching from Sierra Leone to the Horn of Africa. The pull factor: a return by China to high rates of economic growth. The inevitable will happen. The trail has already been blazed and there will be plenty of people at both ends to make the journey easier.

Finally, Chinaâs own demography will facilitate the insertion of immigrants. By the year 2030, her population will peak in absolute numbers and start to decline, slowly at first and then at an ever faster pace. Deaths already outnumber births in Hong Kong and Macao, and this âpopulation sinkâ will probably spread to most of urban China over the coming decade. Vacancies will open up in the job market and in housing estates, especially if China continues to ride a wave of strong economic growth. There will be plenty of niches that immigrants can move into: vacant tenements; risky or low-paying jobs in construction and services; etc. Meanwhile, rising food prices will keep more and more Chinese on the land. There will still be migration from rural areas, but it wonât be enough to quench the thirst of Chinaâs âbubble economyâ.

And so, in high-growth urban centers, a process of population replacement will set in. On the one hand, an aging and often childless indigenous population; on the other, a youthful immigrant community with fertility well above replacement. Much of urban China will take on a multiracial look with many districts becoming minority Chinese. If this trend continues, China will cease to be a vehicle for a specific people, culture, and civilization. It will become an administrative unitâa managerial state that exists to maximize the return for its âshareholders.â

For some pundits, such a scenario is nothing terrible. We have come to the end of history and now it is Chinaâs turn. If Chinese individuals wish to go on being Chinese, they can do so in their spare time with their own money. Collective purpose no longer exists. There is only never-ending self-enrichment.

Has China come to the end of history? Such an assertion carries more than a touch of human vanity. History goes on regardless of what we proclaim. And it is doubtful whether the current good times will go on forever. Like the rest of the world, China will hit the wall of peak oil, even with all the resources of Africa. Its aquifers will dry out or be hopelessly contaminated. Its shrinking farmlands will no longer yield enough food. Sooner or later, Nature herself will cry out âEnough!â

And sooner or later, an aging, diverse, and increasingly non-Chinese population will no longer have the dynamism or unity of purpose that once made China so successful. People will begin to suspect that the secret of her success lay not only in a particular economic system, but also in the Chinese people.

Bodomo, A. (2009) The African Trading Community in Guangzhou (??): An Emerging Bridge for Africa-China Relations, accepted (October 2009) for publication in China Quarterly.
http://www.hku.hk/linguist/staff/ChinaQuarterlySubmission2009ResearchPaper.doc Go East, Young African!
Peter Frost
• 170 Comments • Reply
← China and Interesting Times. Part IIIWalking to the Promised Land →
Hide 17 CommentsLeave a Comment
"Has China Come to the End of History?"
• 17 Comments
Commenters to Ignore
Commenters to ignore (one per line)