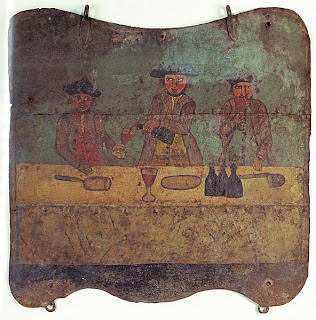 Sign for an inn, late 17th century, New France. Many merchants began as innkeepers who provided not only accommodation but also other services. (source)

I have just published an article in the journal Advances in Anthropology: Tay-Sachs and French Canadians: A Case of Gene-Culture Co-Evolution? Comments are welcome.

Tay-Sachs, an inherited neurological disorder, is unusually common among French Canadians from eastern Quebec. Two alleles are responsible, one being specific to the north shore of the St. Lawrence and the other to the south shore. This pattern of convergent evolution suggests the presence of a selection pressure limited to eastern Quebec. Both alleles probably arose after the British conquest of Quebec in 1759 or at least were uncommon previously. To explain the high incidence of Tay-Sachs among Ashkenazi Jews, some authors have invoked heterozygote advantage, i.e., heterozygous individuals enjoy a higher rate of neuronal growth, and thus greater learning capacity, without the neurological deterioration of homozygous individuals. Such an advantage would have helped Ashkenazim perform the mental effort required for work in trade and crafts. A similar situation may have developed in eastern Quebec, where the relative scarcity of British and American merchants made it easier for French Canadians to enter occupations that required literacy, numeracy, and future time orientation.

← Our Brideprice CultureEast Germans Are Getting a Lot Smarter ... →
Current Commenter
says:
Current Date at Time Now
Leave a Reply - Comments on articles more than two weeks old will be judged much more strictly on quality and tone
Cancel Reply
Commenting Disabled While in Translation Mode