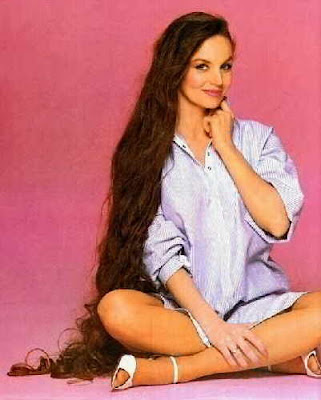 Crystal Gayle, American country music singer (source). In humans of Eurasian origin, head hair can grow down to the mid-back and even farther. Long silky hair must have evolved relatively late, certainly no earlier than the last 50,000 years.

All of us are born pale, and this infant pallor is striking in otherwise dark-skinned families. Lighter skin also characterizes women, who in this and other ways seem to mimic certain visual, tactile, and auditory aspects of infants (paedomorphic face, soft hairless skin, higher pitch of voice, etc.). Skin tone is, in fact, a key input for sex recognition, particularly the luminous contrast between facial skin and the eyes or lips. This visual cue becomes critical to the mating success of women wherever the supply of mateable men is limited, the result being sexual selection for lighter-skinned women and, thus, a gradual lightening of mean skin color not only for women but for the entire population as well.

Head hair may have followed a similar evolutionary trajectory. In sub-Saharan Africa:

[â¦] the majority of African babies are not born with springy tight curls, the African child at birth is either bald or has silky loose curls similar to the Jheri curls. The springy tight curls develop within the first year of life but a few negroid Africans retain their silky hair type for life. (Ajose, 2012)

This process seems to have gone further in women, their scalp hairs having higher mean diameter and hence more volume, even in the naturally shorthaired New Guineans (Walsh and Chapman, 1966). Men also tend to lose their head hair, often as early as their 20s. In his review of the literature, Sigler (2011, p. 13) concludes that hair growth rate and final length are somewhat greater in women than in men. It looks as if this hair lengthening was driven by a selection pressure that acted primarily on women.

â¦ but not in all humans

Long silky hair isnât universal in our species. It exists only in those humans who are native to temperate and arctic regions or in those whose ancestors have back-migrated to the tropics, i.e., tropical Amerindians and Austronesians. Darwin noted “the extraordinary difference in the length of the hair in the different races; in the negro the hair forms a mere curly mat; with us it is of great length, and with the American natives it not rarely reaches to the ground” (Darwin, 1936 [1888], p. 906).

If long silky hair evolved outside the tropics, it must have appeared after ancestral humans had begun to spread out of Africa, some 50 thousand years ago. This point is lost on many paleoanthropologists who attribute this evolutionary change to much earlier events, like the discovery of fire or even a hypothetical aquatic phase of our hominid past.

Whatever the initial cause, there is a consensus, going back to Charles Darwin, that long silky hair is primarily ornamental and due to sexual selection: âwe know that long tresses are now and were formerly much admired, as may be observed in the works of almost every poet; St. Paul says, “if a woman have long hair, it is a glory to herâ (Darwin, 1936 [1888], p. 906). This view was part of his more general one that âthe differences between the races of man, as in colour, hairiness, form of features, &c., are of a kind which might have been expected to come under the influence of sexual selectionâ (Darwin, 1936 [1888], p. 556).

Darwin believed that sexual selection produced physical differences among human populations through differing notions of beauty. He even raised the possibility that âeach race would possess its own innate ideal standard of beautyâ (Darwin, 1936 [1888], p. 890). An alternate view, which I favor, is that innate notions of beauty are similar in all humans. To the extent that physical differences among human populations are due to sexual selection, the reason is that this selection pressure has been stronger in some populations than in others (Frost, 2008).

Why, then, did head hear grow longer as humans left the tropics?

As ancestral humans spread out of the tropics, women found it harder to gather food during the cold season and had to rely more on men to get food for themselves and their children. Polygyny accordingly became costlier for men, with the result that only the ablest hunters could take additional wives. At the same time, men had to roam over larger hunting territories because the density of wildlife was lower. Hunting-related mortality thus rose among young men.

For these two reasonsâless polygyny and higher male mortalityâthe non-tropical zone tended to have a lower ratio of men to women on the mate market. More women had to compete for fewer available men, thus shifting the pressure of sexual selection from the latter to the former. The situation was not unlike that of actresses lining up for a part in a Hollywood movie. When all of the candidates seem perfect for the job, even little details can make a big difference.

One of those details was head hair. Men do notice long silky hair, if only as a visual input for recognition of women or infants, and such noticeability may be a dealmaker in a mate market where women are in excess supply. In such ancestral environments, head hair would have grown longer and longer with each generation.

Was there gene-culture co-evolution?

This lengthening may have been helped by gene-culture co-evolution. In other words, there was a transitional period when women used artificial means to lengthen their head hair. The resulting cultural expectation for longer hair may have favored the mating success of naturally long-haired women.
This hypothesis has support in the apparently ancient time depth of hair lengthening in Africa. As Khumalo (2008) notes:

Africa as the cradle of mankind is likely to have had hair care since the beginning of human existence. Partly because of the oral tradition of passing down history, it is difficult to corroborate evidence of hair care. But probably the earliest form of hair straightening was the molding of hair into shapes using various clays and mud (e.g., indicating the station of a married woman among the Zuluâs). [â¦] Hair was also lengthened with fibers and grasses, much as is done for braids with synthetic extensions nowadays. Although small decorative comb-like structures have been discovered with archeological finds, it is not clear whether original Africans combed their hair or if these implements were purely decorative. Although not written down, fascinating stories of more recent hair care (and hair disasters) are often told by older women about straightening hair using hot stones even before hot combs became available.

West African women invest much time and effort in lengthening their head hair. This isnât just an obsession of African American women, as some may think:

âBig hair,â âplenty of hair,â âmuch hairââWest African communities, including Mende, admire a fine head of long, thick hair on a woman. Both these elements are crucial: thickness and length. Thickness equals increase in the number of individual strands, and the length is proof of strength. Growing such luxuriant hair requires a Mende womanâs patience and care. Because a manâs hair is kept shaved or cut close to the scalp, people say that âmen donât have hair.â Beautiful hair thus is a distinctly female trait; the more of it, the more feminine the woman (Boone,1986, p. 184).

This hairdressing tradition is ancient enough to have spawned myths:

It is known among Mende that all the âwater people,â angels, have marvelous hair. The mermaid Tingoi is known by her long, wavy hair and her glamorous habit of dressing it with a golden comb while seated on a rock. A little girl with especially long hair is feared to be in danger of drowning because she will be very attractive to the âwater people,â who may think she is one of them and wish her to join them. (Boone, 1986, p. 192)

Among African Americans, women braided and threaded their hair from an early date, whereas men often shaved their headsâan indication that head hair was deemed to be a female characteristic (White and White, 1995).

In sum, hair lengthening seems to be an indigenous tradition whose origins precede not only enslavement in the Americas but also the first contacts with Europeans in Africa. Its purpose has always been to look more feminine â¦ and not âwhite.â

From artificial to natural

In sub-Saharan Africa, sexual selection was never strong enough to favor women with naturally long hair. This selection pressure would have steadily increased, however, as ancestral humans spread farther north into environments that tended to limit polygyny and boost male mortality.
Head hair may have lengthened during the initial phase of this increasingly intense sexual selection. Eventually, peak intensity was reached as humans spread into the habitable steppe-tundra of northern and eastern Europeâwhere women had few opportunities for food gathering and where men had to hunt migratory herds of game animals over long distances. It was this later phase that likely produced the diverse palette of hair and eye colors in present-day Europeans, as well as their strange, albino-like skin. The Puzzle of European Hair, Eye, and Skin Color
Peter Frost
• 16 Comments • Reply
← Perception of Skin Color in Sub-Saharan...Facial Contrast and Femininity →
Hide 43 CommentsLeave a Comment
"Great Hair ... and How It Evolved"
• 43 Comments
Commenters to Ignore
Commenters to ignore (one per line)

← Perception of Skin Color in Sub-Saharan...Facial Contrast and Femininity →
Current Commenter
says:
Current Date at Time Now
Leave a Reply - Comments on articles more than two weeks old will be judged much more strictly on quality and tone
Cancel Reply
Commenting Disabled While in Translation Mode