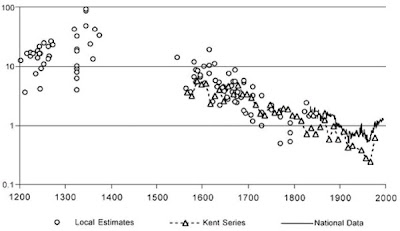 States seek to pacify their territories by monopolizing the use of violence. With each passing generation, violent individuals are ostracized, imprisoned, or executed, their predispositions being thereby selected out of the gene pool. Has this âgenetic pacificationâ made longtime State societies kinder and gentler places to live in?

The last millennium saw violence steadily decline in Western societies, and this trend has caught the attention of scholars like Manuel Eisner (2001), Gregory Clark (2007), Steven Pinker (2011), and our beloved hbd* chick (2012).

Clark attributes the decline to an underlying demographic, cultural, and even genetic change. With the end of the Dark Ages, states began reasserting their power throughout Western Europe and reestablishing their monopoly on the use of violence. The result was a new social landscape. The young violent male went from hero to zero, with success now going to the law-abiding man who bettered himself by peaceful means. And so the meek inherited the earthâor rather those portions of the earth under persistent State control.

But was this evolution cultural or genetic? Did the meek reproduce their meekness by teaching their children to behave likewise? Or were they passing on certain genetic predispositions?

Clark is hesitant on this point, and rightly so. How does one distinguish cultural from genetic inheritance? And is it possible for genetic evolution to work that fast?

We know that aggressive/antisocial male behavior is moderately to highly heritable. A meta-analysis of twin and adoption studies put forward a heritability of 40% (Rhee & Waldman, 2002). A later twin study found a heritability of 96%, where the subjects were 9-10 year-olds of diverse ethnic backgrounds (Baker et al., 2007). This higher figure reflected the narrow age range and the use of a panel of evaluators to rate each subject. In the latest twin study, the heritability was 40% when the twins had different evaluators and 69% when they had the same evaluator.

Is this heritability high enough, and the time span long enough, to account for the historical decline of violence? This question has been addressed by American anthropologist Henry Harpending at the blog West Hunter.

He began by defining this heritable trait as a âpropensity to violence.â The stronger the propensity, the lower would be the threshold for real violence. In the comments, Steve Sailer pointed out the need to distinguish between organized violence, i.e., war, and disorganized violence. In reply, Henry Harpending restricted his definition to violent acts by individuals with âhigh time preference and fast life history.â

He then calculated the speed of the hypothetical genetic change, and the corresponding strength of natural selection:

[â¦] What strength of natural selection would have been required to cause this amount of genetic change? [â¦] Assuming an additive heritability of 0.5 (the true value is probably 0.8 or so from literature on the heritability of aggressive behavior in children) the selective differential must be about 1/14 or .07 standard deviations per generation. [â¦] This would occur if the most homicidal 1.5% of the population were to fail to reproduce each generation (Harpending, 2012)

That figure of 1.5% sounds awfully high. Yet itâs close to historical reality. In 16th century England and Flanders:

Executions were carried out at the rate of one per ten thousand inhabitants per year, i.e., ten times more than under Louis XV. Women were, except during acute epidemics of witch-hunting, less executed than men. Life expectancy was shorter than today: probably around 40 years. Calculation shows that one man out of a hundred at most, or one man out of two hundred at least, ended his life following a judgeâs decision!(Taccoen, 1982, p. 52; see also Savey-Casart, 1968).

This is a figure between 0.5% and 1.0% of the population, which is still less than Henry Harpendingâs calculation of 1.5%. But that first figure excludes extra-judicial executions, i.e., men who were killed before they could be brought to justice, typically at the time of the crime. Nor does it include the significant number of accused who died in jail while awaiting trial. When the records of one medieval English jail were examined, it was found that 25% of the inmates died before they could be tried. By comparison, only 25% of them were eventually convicted of their alleged crimes (Ireland, 1987).

Finally, violent predispositions were also being weeded out by a third factor: class differences in reproductive success, i.e., Clarkâs model. A pacified society tends to marginalize violent men and confine them to the lower classes, which reproduce at a lower rate than do the middle and upper classes of premodern societies with unrestricted fertility (Clark, 2007, see also Frost, 2010).

In the comments on Henryâs post, it was pointed out that murder cases were rarely solved during the Middle Ages. Executions were largely for more common and less serious crimes like highway robbery and horse theft (although such offences would have been difficult to commit without a willingness to kill).

Yes, medieval justice was worse than modern justice at solving specific murder cases. In general, it was less effective at finding the specific criminal behind any one crime. But it was more effective, and ruthlessly so, at profiling likely criminals. This explains the seemingly irrational harshness of medieval punishment for petty crimes. The punishment was aimed not so much at the crime but at the underlying criminal mindset. If someone had crossed the psychological barrier of committing one crime, however petty it might be, he or she would probably commitâor may have already committedâ other crimes of greater importance. Qui vole un oeuf vole un bÅuf.

My elementary school was one of the last to end corporal punishment. Once, I was strapped for talking in class without permission (the lunch hour bell had already sounded, but the teacher hadnât formally dismissed us). The teacher was uncompromising: If I had broken one rule, I had probably broken others. If unpunished, I might go on to do something worse.

This old mentality may partly explain the historical decline of violence. Our ancestors were selected for their ability to learn âwhat to do and what not to do.â And this is how many think today. Once a given rule has the backing of perceived moral authority, we eagerly fall into line, despite any inner doubts we might have. That has been one of the strengths of our civilization. It may also be our undoing.

Pinker, S. (2011). The Better Angels of Our Nature: Why Violence Has Declined, Viking. How Many Were Already Fathers?
Peter Frost
• 43 Comments • Reply
← Origins of English IndividualismYear's End →
Hide 85 CommentsLeave a Comment
"Genetic Pacification in Medieval Europe"
• 85 Comments
Commenters to Ignore
Commenters to ignore (one per line)