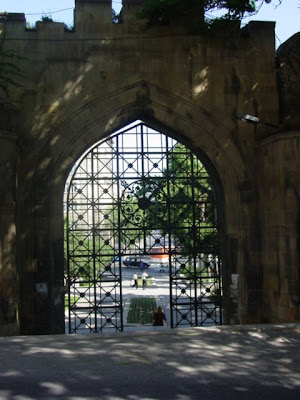 Market gate, old city of Baku. Until a few centuries ago, markets were highly localized in time and space. Most economic activity took place outside them, either within each household or in long-term reciprocal relations within the community.

The political Right typically believes that a market economy will self-generate as long as government gets out of the way and as long as property rights are legally protected.

But why, then, are market economies relatively recent? When Adam Smith wrote The Wealth of Nations (1776), he was describing an economic system that had scarcely existed a few centuries earlier in England and that was still unknown in most of the world. It wasnât as if people had been ignorant of the market principle and its potential for creating wealth. In fact, markets had been common since the dawn of history and probably long before. But they had been highly localized in time and space, with most economic activity taking place outside them, either within each household or in long-term reciprocal relations within the community. Something kept all of these isolated marketplaces from expanding into a market economy.

That something was âtrust.â Market economies have developed in societies where lying, cheating, and stealing are highly stigmatized, even when dealing with strangers and even when the chances of getting caught are minimal. In such societies, some people may deviate from this behavioral norm, but they are just thatâdeviants. They are the exceptions, not the rule. In the early 70s, my hometown used to have newspaper boxes that operated on the honor system. You took a paper and placed enough money in the coin slot. Nothing kept you from taking a paper without paying, but nobody ever did.

Yet this is not how most of the world works. When I raise this point with other people, they usually agree. Like me, they have traveled and seen how other societies really operate. But then they will argue that such societies are deviant. Somethingâlack of opportunity, poor education, or improper role modelsâis preventing them from being normal.

Yet the truth is the opposite. It is the high-trust societies that are abnormal, both historically and geographically. They are the ones that have abandoned the fundamental rule of trusting kith and kin above everyone else (because everyone else is out to screw you). That norm no longer applies to them. They have deviated from it; therefore, they are deviant.

Gregory Clark (2009) has described the trajectory that has led some societies to deviate from the low-trust norm:

The Darwinian struggle that shaped human nature did not end with the Neolithic Revolution but continued right up until the Industrial Revolution. But the arrival of settled agriculture and stable property rights set natural selection on a very different course. It created an accelerated period of evolution, rewarding with reproductive success a new repertoire of human behaviors â patience, self-control, passivity, and hard work â which consequently spread widely.

Was this behavioral shift due to changes in genes or in memes (learned ideas)? The question is difficult to answer (and not simply because many find it offensive). Natural selection operates on phenotypes, and only indirectly on genotypes. There was probably a mix of changes to learned behaviors and innate predispositions. There may also have been changes to gene/culture interaction, i.e., some predispositions may have now required less âexerciseâ to become fully expressed.

Whatever its exact nature, the overall change seems to have been a shift toward the sort of behavioral regime that exists in certain small communities, such as Hutterite colonies and Israeli kibbutzes, except on a much larger scale:

Still, a common good is always a fragile commodity, vulnerable to the parasitism of self-interest and nepotism. How were these perils averted? A large part of the answer is simply small size. Communities are small enough for everyoneâs behaviour to be continuously monitored and controlled through informal, and if need be, formal sanctions. At the same time, the group is small enough for the contribution of every adult to be crucial to the collective welfare, and, therefore, for everyone to have a large stake in controlling shirkers and free-riders. In short, the costs of rewarding good behaviour and stigmatizing parasitism are much lower than the costs of ignoring other peopleâs behaviour. Both types of communities are notorious for lack of privacy: everyoneâs behaviour is everybodyâs concern. (van den Berghe & Peter, 1988)

But how was it possible to expand this high-trust environment to one that would encompass millions of people? How did societies like England pull it off?

Clark, G. (2009).The Domestication of Man: The Social Implications of Darwin, ArtefaCToS, 2, 64-80
http://campus.usal.es/~revistas_trabajo/index.php/artefactos/article/view/5427