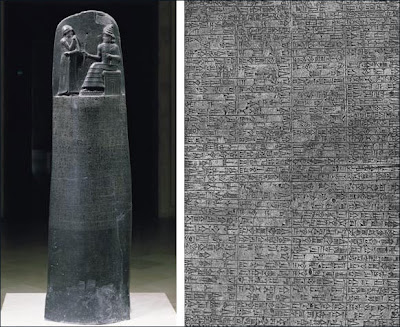 Code of Hammurabi. Today, law is based on universality, impartiality, and non-discrimination. Yet, originally, its core principles were the very opposite.

A key stage in cultural evolution has been the transition from low-trust to high-trust societies. Originally, the âhorizon of trustâ encompassed only close kin and long-time friends. Then, in some societies, this horizon progressively broadened to include more distant kin, eventually millions of people. How was this done?

In part, through âfictitious kinship.â Patricia Williams describes how this approach has been used to integrate in-laws into kinship networks:

The way to accomplish this deep acceptance of oneâs spouseâs relatives, surely, is to take the emotions regarding oneâs own genetic kin that are already present, attach symbols to the emotions, and redirect them to nonrelatives by considering those nonrelatives to be symbolic kin. A strong way to do this is to transform them by exactly parallel termsâcall his parents âMomâ and âDadâ; call his siblings âsisterâ and âbrother.â (Williams, 1988, p. 564)

We have also seen this approach with religion, nationalism, and later internationalism: âBrothers and sisters in Christâ; âI am my brotherâs keeperâ; âWe are all âbrothersâ and so on.

A related approach has been to expand the system of law that once existed only among kith and kin. The notion of âlawâ may seem out of place here, accustomed as we are to its principles of universality, impartiality, and non-discrimination. Yet, originally, its core principles were the very opposite. Law was not universal. It arose within the web of long-standing reciprocal obligations that bound together man and woman, parents and children, immediate kin and more distant kin within a relatively small clan. Beyond oneâs kith and kin, there was no lawâother than the law of war.

Things changed with the rise of larger entities. Agriculture spurred population growth, with the result that small clans ballooned into much larger groups. Later came State societies, and empires that encompassed a founding ethnic group and its conquered peoples. Typically, this situation was managed by letting conquered peoples keep their own laws and some internal autonomy. This was the case with the Persian Empire, the Ottoman Empire, and many others. Pre-revolutionary France was a patchwork of local legal systemsâa relic of earlier regional entities that had been absorbed into the French state over the centuries.

To varying degrees, State societies eventually reversed the original intent of lawâby creating universal rules that apply equally to everyone. This process began with the earliest law codes. The very act of putting a social norm into writing entailed some simplification. Ancient legal systems accepted that laws should vary on a âwho whomâ basis, but the different categories of âwhoâ and âwhomâ were necessarily limited.

This process advanced further with certain empires, notably the Roman Empire, which sought not merely to conquer other peoples but also to assimilate them, eventually giving them citizenship. But it was the rise of Christianity, and its establishment as a State religion, that fundamentally changed things. The law was no longer the prerogative of a founding group whose claim to power ultimately rested on âmight is right.â It became a moral principle that applied equally to everyone, even the Emperor. When a mob killed a Roman general in 390 AD and thousands were slain in retaliation, the bishop of Milan denounced the massacre and forced the emperor to do public penance (Frost, 2010; Lenox-Conyngham, 2005).

Francis Fukuyama makes this point in his forthcoming book The Origins of Political Order, although he places the influence of Christianity later in time:

[â¦] the concept of the rule of law emerged very early, largely because of the churchâs development of canon law in the 11th century. So when strong rulers started to build states, they had to take account of the emerging codes of civil law.

Europeans then developed the unusual idea that it was the law that should be absolute, not the ruler. In pursuit of this principle, the English Parliament executed one king, Charles I, and deposed another, James II. This proved a durable solution to the problem of building a strong state, yet one in which the ruler was held accountable. (Wade, 2011)

The last phase of this process began with the end of the Dark Ages, and the re-establishment of more orderly societies. Success no longer went to the âbad boysââthe plunderers and ruthless self-aggrandizersâunless they happened to be the ruling elite. And even ruling elites had to become less rapacious, especially after converting to Christianity and founding dynastiesâif only to avoid fouling their nest and leaving nothing to their heirs.

People thus entered a new environment of natural selection. A process of self-domestication began, as described by the historical economist Gregory Clark:

[â¦] societies becoming increasingly middle class in their orientation. Thrift, prudence, negotiation and hard work were imbuing themselves into communities that had been spendthrift, violent, impulsive and leisure loving. (Clark, 2009)

The above list leaves out another personality change. People began to show more empathy toward non-kin. Keep in mind that material success, and ultimately reproductive success, now depended on obedience to the law. And as the law became decontextualized and universalized, success went to those people who could understand universal rules, comply with them, and enforce compliance on others.

This predisposition to follow universal rules and live a rules-based existence might have been passed on culturally or genetically. Natural selection doesnât âknowâ which is which, and in a traditional environment the outcome is quite similar. Whatever its cause, this predisposition would have gradually become more widespread with each passing generation. Clark (2009) does, however, make the case for at least partial genetic inheritance:

Such propensities might reflect weaker impulse control and a more present-oriented time orientation. But it could also indicate indifference toward others, especially non-kin, and a weaker ability to internalize and apply universal rules of conduct. Deceitful behavior in particular seems to have a significant genetic component (Barker et al., 2009). The shift to a high-trust society certainly involved learning new behaviors, but learning wasnât the whole story.

The Lack of Progress in Science: Sex Differences
Razib Khan
• 98 Comments
← From Markets to Market EconomyThe Fall of Blood Lust and the Rise of ... →
Hide 6 CommentsLeave a Comment
"From Low Trust to High Trust"
• 6 Comments
Commenters to Ignore
Commenters to ignore (one per line)

← From Markets to Market EconomyThe Fall of Blood Lust and the Rise of ... →
Current Commenter
says:
Current Date at Time Now
Leave a Reply - Comments on articles more than two weeks old will be judged much more strictly on quality and tone
Cancel Reply
Commenting Disabled While in Translation Mode

Beware of the J-Ray or the Jewish-Ray of the Mass Electronic Media
J-Ray enables the Gay-Ray â The Need for White Light and Right Light â The Jewish Hustle in the Takeover of Goy Mass...
Jung-Freud • January 3, 2023
• 7,700 Words • 60 Comments • Reply