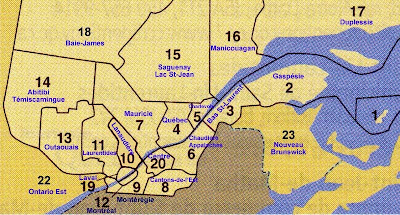 In French Canadians, Tay Sachâs is caused by 2 different mutations that arose within a relatively small geographic area and short time frame (neither mutation is reported in France). This area (Bas St-Laurent and Charlevoix) is also the one where English Canadian merchants and managers were historically the least present. Is there a link between the two?

The field of human genetics has focused more on some gene pools than on others, with French Canadians being one of its favorites. There are two reasons:

1. While numbering some six million today in Quebec alone, they descend almost entirely from 8,500 or so foundersâmostly French settlers with some Amerindian and British admixture. Such a homogeneous gene pool can more easily show how mutations spread and how natural selection works.

2. The genetic lineages are relatively easy to reconstruct for the past three to four centuries, partly because French Canadians have tended to stay put in the same locality, at least until recently, and partly because Catholic parishes have kept detailed records of births, marriages, and deaths.

The French Canadian gene pool is showing us that human evolution did not stop in remote prehistoric times. Yes, natural selection is ongoing. It has produced significant genetic change even over the last three to four centuries.

One example of recent selection is the decline in Amerindian admixture. According to a genealogical study of parish registers, Amerindians made up 1.2% of all founders but now account for only 0.1 – 0.3% of current ancestry (Bherer et al., 2010).

Both estimates certainly understate Amerindian admixture. Such admixture was under-reported by parish registers because it tended to occur in frontier areas and through common-law marriages. Amerindian admixture also entered the French Canadian gene pool via Acadians, whom Bherer et al (2010) list as a separate ethnic group.

Nonetheless, this under-reporting should have affected the above two estimates more or less equally. If we look at the lineages for which we do have information, it seems that Amerindian admixture has tended to reduce their reproductive success.

Why? One reason is that it largely occurred among French settlers who were already more marginal than average, either socially (lower on the social scale) or spatially (farther away from the main zone of settlement). Such people had fewer opportunities for success and thus tended to have fewer children who would survive to adulthood.

Beginning in the 19th century, the inhabitants were split into two social groups. In one, the inhabitants were stable, hardworking, preoccupied with their heritage of land and family, and governed by an increasingly strict ethic. In the other group were the marginal folk, the mÃ©tissÃ©s [mixed with Amerindians], the less rich, and those who mucked about. They would settle on the periphery of the parish, in âthe concessionsâ â¦

Because the two groups differed in their circumstances, behavior, and sub-cultural characteristics, it is hardly surprising that they followed different trajectories of reproductive success.

Tay Sachâs disease is unusually common among French Canadians, particularly in eastern Quebec. In Rimouski, the heterozygote frequency is 7.6%, compared to 4.2% for Ashkenazi Jews and 0.3% for French Canadians in Montreal (De Braekeleer et al, 1992). The medical literature almost always explains it as a founder effect that was amplified by the rapid population growth of French Canadians from the mid-18th to mid-20th centuries.

This explanation is challenged by Zlotogora (1994), who points out that French Canadian Tay Sachâs is produced by two different mutations: one that originated on the south shore of the lower St. Lawrence and another that originated on the north shore (Charlevoix County). Neither mutation has been reported from France. Thus, on two separate occasions and in a very small population, something has maintained a genetic mutation that has failed to maintain itself in a much larger population.

Nor does a founder effect easily explain how 2 out of 8,500 founders (0.02%) could have produced the incidences we now see in eastern Quebec or even French Canada in general.

In Ashkenazi Jews, the high incidence of Tay Sachâs has been attributed to natural selection, specifically some advantage associated with mental processing. Indeed, Tay Sachâs is one of four different genetic illnesses that are unusually common among Ashkenazim and that affect the same metabolic pathway in brain tissues (lysosomal storage) (Zlotogora, 1994). In the homozygous state, the alleles in question produce neurological degeneration, mental retardation, and other neural problems. In the heterozygous state, however, they may have helped Ashkenazi Jews cope with mentally demanding occupations, such as in finance or in cottage industry crafts (Cochran et al., 2006; Frost 2007; Murray, 2007)

But why would this natural selection operate among French Canadians? Werenât they the ones who toiled on the land and in the factories while English Canadians monopolized the skilled brainwork of trade, accounting, and management? First of all, this is a caricature of reality. There has always been a French Canadian middle class, although it was historically smaller in size than the English Canadian one.

More to the point, middle-class English Canadians were not uniformly spread across the province. Demographically and economically, they used to dominate the Ottawa valley, the Montreal area, the Eastern Townships, Quebec City, and the eastern and southern portions of the GaspÃ© Peninsula. Economically, they also dominated the hinterland of Trois-RiviÃ¨res and the Lac Saint-Jean region (timber industry). This leaves two regions where, historically, they were virtually non-existentâthe same regions that report unusually high incidences of Tay Sachâs.

An economic niche existed and had to be filled. In the absence of ethnic outsiders, middle-class French Canadians would have had more opportunities to go into business, marry earlier, and have larger families. Is this what happened in the lower St. Lawrence and Charlevoix County?

An obvious test would be to review Tay Sach genealogies in these two regions to see whether heterozygotes were over-represented in mentally demanding occupations, i.e., small business, law, medicine, accounting, etc.

Intelligence and General Knowledge: Your Starter for 10 Â
James Thompson
• 70 Comments • Reply
← Religiosity and the Origins of Civiliza...Five Years Later ... Still No Study →
Hide 10 CommentsLeave a Comment
"French Canadians: An Evolving Gene Pool"
• 10 Comments
Commenters to Ignore
Commenters to ignore (one per line)

← Religiosity and the Origins of Civiliza...Five Years Later ... Still No Study →
Current Commenter
says:
Current Date at Time Now
Leave a Reply - Comments on articles more than two weeks old will be judged much more strictly on quality and tone
Cancel Reply
Commenting Disabled While in Translation Mode