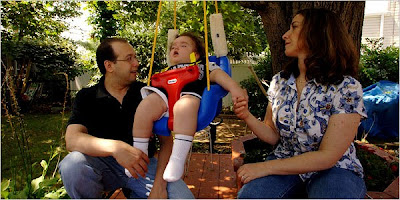 Tay-Sachs child. In the 1980s, there was concern that Tay-Sachs heterozygotes might be mentally handicapped to a lesser degree.

What is the evidence that Tay-Sachs heterozygotes have higher-than-normal intelligence? To date, it is inferential. Ashkenazi Jews have unusually high incidences of several genetic diseases that have similar effects on neural tissue.

[â¦] the sphingolipid mutations look like IQ boosters. The key datum is the effect of increased levels of the storage compounds. Glucosylceramide, the Gaucher storage compound, promotes axonal growth and branching (Schwartz et al., 1995). In vitro, decreased glucosylceramide results in stunted neurones with short axons while an increase over normal levels (caused by chemically inhibiting glucocerebrosidase) increases axon length and branching. There is a similar effect in Tay-Sachs (Walkley et al., 2000; Walkley, 2003): decreased levels of GM2 ganglioside inhibit dendrite growth, while an increase over normal levels causes a marked increase in dendritogenesis. This increased dendritogenesis also occurs in Niemann-Pick type A cells, and in animal models of Tay-Sachs and Niemann-Pick. (Cochran et al., 2006)

Such âdiseasesâ may have beneficial effects in the heterozygote state:

Heterozygotes have half the normal amount of the lysosomal hydrolases and should show modest elevations of the sphingolipid storage compounds. A prediction is that Gaucher, Tay-Sachs and Niemann-Pick heterozygotes will have higher tested IQ than control groups, probably in the order of 5 points. (Cochran et al., 2006)

That paper was written five years ago. Since then, no one has tested the IQ of Tay-Sachs heterozygotes in relation to non-carriers (after controlling for differences in ethnicity and socioeconomic status). Yet such a study would hardly be rocket science.

Ironically, this kind of study had been done previously, back in the 1980s. At that time, the concern was that Tay-Sachs heterozygotes might have lower IQ. The study was consequently set up to look for some kind of mental deficit:

Yes, but how well did the Tay-Sachs heterozygotes do on those tests? The authors say nothing on that point, other than making the following observation: