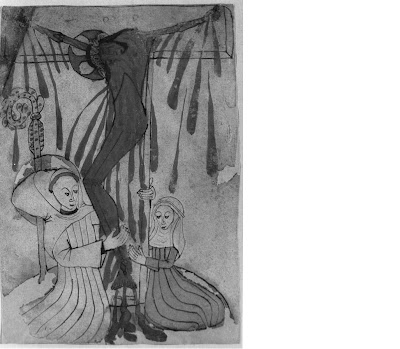 St. Bernard of Clairvaux and a nun embrace a bloody crucifix (early 14th century). While co-opting blood lust as a means to strengthen its emotional appeal, Christianity also created a social environment that gradually removed such desires from the population.

In the past millennium, some European societies underwent a profound behavioral change. People no longer limited their trust to close kin and longtime friends. It became normal to trust even non-kin and strangers, and this increased trust allowed the market economy to take off. When people are generally âgood-natured,â you no longer have to check and double-check every transaction for evidence of cheating. You no longer have to be on your guard when dealing with strangers. You no longer have to scrutinize facial expressions and body language for signs of deceitâor an oncoming sucker punch. You no longer have to overcharge to cover the costs of theft, vandalism, and âinventory shrinkage.â

This is what we call a high-trust society. Its advent was a milestone of cultural evolution, yet we tend to focus on more material signs of progress. Even more surprisingly, we tend to take a high-trust environment for granted. Arenât people good-natured by nature? Isnât anything else abnormal?

Well, no. That kind of abnormality used to be the norm. And it still is, in many societies.

What did this transition actually mean in behavioral terms? For the historical economist Gregory Clark, it meant a shift from improvidence, violence, impulsiveness, and leisure loving to thrift, prudence, negotiation and hard workâwhat some now deride as âmiddle-class values.â Indeed, these values were those of the nascent middle class, and they became more preponderant as that class itself became more preponderant. By the early 19th century, in England, even the working class largely had middle-class ancestry (Clark, 2009).

This is not to say that the older behavioral traits were completely removed from the English population. Rather, they were reduced to a level that allowed the growing middle class to impose its norms on the entire population. The first attempts at imposition came with the rise of Puritanism in the 16th and 17th centuries, but the high tide of this behavioral hegemony would be the Victorian era of the mid to late 19th century.

During the same period, another behavioral shift was an increase in empathy. People began to show more concern for strangers, non-kin, and even non-human animals. Furthermore, this greater outward concern was paralleled by greater inward feelings of grief, love, and worry for the Other.

It is difficult to grasp how people once felt toward others, especially those beyond the charmed circle of close kin and friends. Such feelings went beyond mere indifference. Clark (2007) describes the former popularity in England of blood sports and other forms of exhibitionist violence (cock fighting, bear and bull baiting, public executions). Yes, most normal people used to crave the sight of blood and suffering.

Bynum (2002) describes this infatuation with the sight of blood in the late Middle Ages. There was above all âthe violent quality of the religiosity itselfâwhat we might call its visual violence, especially the prominence of the motifs of body parts and of blood.â This blood cult often spilled over into real violence:

In an even more troubling and graphic sense, the blood that spilled across European piety also accused, calling for vindication of, as well as empathy with, Christ. The majority of the blood cults of fourteenth- and fifteenth-century Europe were places of supposed host desecration, and these wonderhostsâsites of pilgrimage and pogromâtargeted lower-class women, thieves, and most of all Jews as violators of God. (Bynum, 2002, p. 31)

Blood lust is as old as humanity. Christianity merely used this desire to bind people to the faith. In time, however, Christianity became a means to remove blood lust from the repertory of normal feelings and, hence, to stigmatize people who openly voiced their love for the sight of blood. Such people found themselves increasingly marginalizedâas suspected criminals, undesirable marriage partners, or simply âperverts.â With each passing generation, this predisposition was steadily culled from the population. We can see the beginnings of the displacement of blood lust by empathy in the 15th century, in the writings of the religious mystic Margery Kempe:

Margery tells us she thought of Christ beaten or wounded not just when she saw the crucifix but whenever she âsaw a man or a beast . . . [with] a wound or if a man beat a child before her or smote a horse or another beast with a whip . . . as well in the field as in the town . . . .â To Margery, the violence of everyday life only reduplicated her sorrow at the violence inflicted on Christ. But the displacement could work the other way; the horror and filth of living could seem to pollute God. (Bynum, 2002, pp. 25-26)

Was this decline in blood lust driven by changes to the gene pool or by changes to learned behaviors? The answer is unclear, if only because natural selection acts indifferently on both. In their review of the literature, Jones and Gagnon (2007) state:

Some investigators have demonstrated a potential genetic basis for empathy (Hoffman, 2000). For example, Zahn-Waxler et al. (1992) found modest evidence for heritability of empathy and prosocial behaviours in 14- to 20-month-old monozygotic and dizygotic twins.

Further, empathic reasoning was associated with fewer behavioural problems in twin studies, suggesting a possible genetic basis for risk and resilience for psychopathology (Zahn-Waxler et al., 1996). Ultimately, these findings have been used to suggest that empathy has genetic influences as well as environmental ones (due to the modest heritability factor) during normal and problematic development. (Jones & Gagnon, 2007, p. 227)
On the other hand, Kochanska (1993) argues for a more complex mix of heritable and environmental factors:

However, impulsivity may have a more complex relation with conscience development. It may indeed interfere with observing prohibitions and suppressing antisocial impulses, but it need not interfere with positive aspects of morality, such as empathy, sympathy, and response to others’ distress. Bryant (1987) found that girls who at age 7 were characterized on Thomas and Chess’s dimensions of temperament as intense and difficult to soothe (concepts that have some affinity to impulsivity) were more empathic at age 10. (Kochanska, 1993, p. 338)

Whatever the exact mix of genes and memes, Christianity eventually created a new man and a new woman. This cultural and biological evolution has been so successful that we are scarcely aware that human nature used to be very different. Hasnât universal empathy always been normal? And blood lust abnormal?

Kochanska, G. (1993). Toward a Synthesis of Parental Socialization and Child Temperament in Early Development of Conscience, Child Development, 64 (2), 325-347 ← From Low Trust to High TrustSkin Color and the Discrimination Paradigm →
Current Commenter
says:
Current Date at Time Now
Leave a Reply - Comments on articles more than two weeks old will be judged much more strictly on quality and tone
Cancel Reply
Commenting Disabled While in Translation Mode