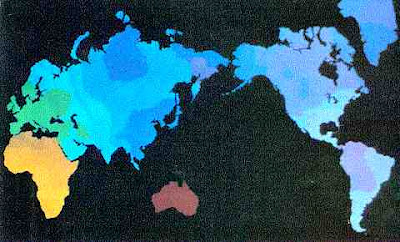 A composite map of human genetic variation appeared on the cover of Cavalli-Sforzaâs tome The History and Geography of Human Genes (1994).

With the sudden end to his work on gene-culture co-evolution, Cavalli-Sforza returned to population genetics. Actually, he had never left it. He had always been looking for new population data and adding it to his global map of human genetic variation.

For any one gene, the map typically showed much more variation within than between human populations, just as Lewontin had found back in 1972. The pattern changed, however, when several gene maps were superimposed on each other. With data coming in from more and more genes, there emerged a distinct pattern of continental populationsâthe same ones that Cavalli-Sforza himself had once called âraces.â This composite map would eventually appear on his tome The History and Geography of Human Genes (1994).

In 1991, he announced a new phase of his research: the Human Genome Diversity Project (HGDP), a program to collect and analyze DNA from all human populations. It would be the crowning achievement of his career. Among other things, it would âproduce a mine of data to comprehensively explore human prehistory, determine the genetic relationships between the earthâs populations, and provide valuable information on human genetic diseasesâ (Stone & Lurquin 2005, p. 160).

Cavalli-Sforza did not expect controversy. After all, he had been pursuing this kind of research for the past twenty-five years. He had also done all the right things, including not saying anything about links between genetics and behavior. There was of course his Inuit study, but it had been aborted at the last minute. Finally, the project had support from a broad range of scientists, including his old colleague Walter Bodmer. It could not possibly go wrong.

It did go wrong. In fact, he had stuck his hand in a hornetâs nest. For the first time in his life, people were denouncing him as a racist and the HGDP as a âvampire project.â He was flabbergasted by what seemed to be a big misunderstanding.

Yet there had been no misunderstanding. The new project violated principles that Cavalli-Sforza himself had earlier acquiesced to. This point was made by two opponents, Joseph Alper and Jon Beckwith, who denied that the HGDP would contribute anything worthwhile to the study of the human genome:

First, [â¦] human beings share more than 99% of their DNA. Second, most of the total genetic variation in the human population occurs within any single group. Intragroup genetic variance is much larger than intergroup variance. Sampling U.S. residents alone with their enormous range of ethnic and racial backgrounds would probably encompass the vast bulk of human variation. It would be hard to justify the cost of the HGDP if its goal were merely to obtain the remaining small amount of genetic variance not accounted for by sampling only U.S. and/or European residents.
(Alper & Beckwith 1999)

This is the same argument that Richard Lewontin had made in 1972 (1). Genes vary much more within human populations than between them. In fact, over 85% of human genetic variation cannot be linked to populations of any kind. It exists only among individuals that belong to the same population (Lewontin 1972). Because this argument met with little or no opposition from other geneticists, including Cavalli-Sforza, it steadily won over more and more people, eventually becoming conventional wisdom by the 1990s.

At worst, however, Lewontinâs finding simply meant that Cavalli-Sforza was wasting his time. Why make a fuss? Since when is it racist to waste your time?

I remember putting a similar question to an anthropology professor. Why were sociobiologists âracistsâ when most of them never said anything about race or race-related issues? He looked at me thoughtfully, as if the usual answers wouldnât work with me. He finally replied that sociobiologists were engaging in âunnecessary debates.â He paused and then added: âBesides, you never know where this stuff will lead to.â

There was nothing racist in the HGDP by itself. It did, however, draw attention to the existence of human populations and could therefore frame questions about the ways people differ from each other:

[â¦] we argue that because the aim of the HGDP is to define genetic differences and similarities among peoples, the potential for racism is inherent in the study design of the project.
(Alper & Beckwith 1999)

What most concerns us is not competition for research funds, although this is an issue in a lightly funded discipline. Rather, what most concerns us is the construct of human variation that the project might embody and reify, and the type of training and socialization that the project will provide for young physical anthropologists. (Goodman & Armelagos 1996, p. 182)

In the face of these attacks on the HGDP, the only successful counterattack would have been to demolish Lewontinâs argument. Cavalli-Sforza could have pointed out that genetic variation between populations differs qualitatively from genetic variation within populations. He could have likewise pointed out that genes vary much more within than between certain species that are nonetheless distinct from each other anatomically, physiologically, and behaviorally.

Instead, he chose the path of least resistance. He began to cite Lewontinâs 1972 paper after having ignored it for two decades. He also began to argue that the HGDP provided further proof for Lewontinâs conclusions:

Last year the Human Genome Diversity Project used 1990s genetics to extend Lewontinâs analysis. Its conclusion: genetic variation from one individual to another of the same âraceâ swamps the average differences between racial groupings. The more we learn about humankindâs genetic differences, says geneticist Luca Cavalli-Sforza of Stanford University, who chairs the committee that directs the biodiversity project, the more we see that they have almost nothing to do with what we call race.
(Begley 1995, p. 67)

Yet all of this was beside the point. If Lewontin was right, the HGDP was wrongâor at least not needed, as two of its opponents noted:

Perhaps, in the right hands, the data will prove once and for all that races are abstractions, that, as Marie-Claire King (1993) says, we will find so much within group variation that the project will be a key to a non-racial science. But, we have known for at least twenty years that within group variation is so much greater than between group variation (Lewontin 1972). We do not need a very expensive data collection exercise to show this. The data are already at hand.
(Goodman & Armelagos 1996, pp. 181-182)

Cavalli-Sforza failed to see the substantive nature of attacks on the HGDP (2). The attacks were fueled not by a horrible misunderstanding, but rather by a sincere belief that very little genetic variation actually exists between human populations. The project was therefore at best unnecessary and at worst mischievous.

He could have met that belief head on by explaining why it was mistaken. Instead, he embraced it as a gesture of good faith.

Perhaps he did see what was going on. Perhaps he thought he could outfox his opponentsâby appearing to give them everything they wanted while keeping the essential. Such a double jeu can work if oneâs opponents are easily fooled.

But these ones werenât. The funding dried up and many researchers who had initially been interested began to shy away. Contrary to what Cavalli-Sforza states in his autobiography, the HGDP remains uncompleted to this day, at least in its originally intended form.

1. Richard Lewontin did not specifically criticize Cavalli-Sforzaâs project, but he did attack HUGO (the Human Genome Project). He was in fact one of the first, if not the first, to denounce human genome studies:

[â¦] simple internal forces, the genes, are now held responsible not only for human health in its normal medical sense but for a variety of social problems, among them alcoholism, criminality, drug addiction, and mental disorders. [â¦] The current manifestation of that belief in the importance of our inheritance in determining health and disease is the human genome sequencing project, a multibillion-dollar program of American and European biologists that is meant to take the place of space programs as the current great consumer of public money in the interest of conquering nature.
(Lewontin 1991, p. 46)

It is unclear what role Lewontin played in mobilizing subsequent opposition to the HGDP. The usual view is that this opposition was spontaneous and broad-based, being largely made up of critics from post-colonial, non-Western societies. This view ignores the role of a vanguard of Western academics, like Lewontin, who had earlier identified such research as a target to be attacked.

2. In his autobiography, Cavalli-Sforza mentions only the opposition from a private Canadian foundation, RAFI (Rural Advancement Foundation International):

I think they were simply short of money. Being in contact with many indigenous groups in the Americas and Oceania, they sought to advertise their merits by criticizing our project. They spread the rumor that we wanted to patent DNA to enrich ourselves and to exploit the indigenous peoples, as many biotech companies had already done by patenting plant hybrids. In addition, we would be able to spread discriminatory information about these peoples or even prepare biological bombs against certain ethnic groups. These rumors were totally unfounded, but they found receptive listeners and enabled the foundation RAFI that propagated them to survive another eight or nine years. (Cavalli-Sforza & Cavalli-Sforza 2008, p. 233).

Goodman, A.H. and G.J. Armelagos (1996). The resurrection of race: The concept of race in physical anthropology in the 1990s, in L.T. Reynolds and L. Lieberman (eds), Race and Other Misadventures: Essays in Honor of Ashley Montagu in his Ninetieth Year, General Hall: Dix Hills (NY), pp. 174-185.

Lewontin, R. (1991). Biology as Ideology. The Doctrine of DNA, Toronto: House of Anansi.