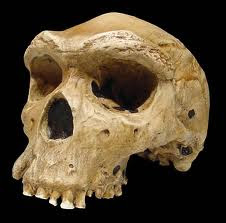 Were archaic hominins still roaming over parts of Africa when farming villages began to form in the Middle East? I raised this question in my last post. But others are now raising it too:

The lesson is that Africa, a vast continent encompassing virtually all of our recent evolutionary ancestry, contains yet unknown degrees of diversity. At the same time that modern humans were emerging, they would have lived in landscapes alongside more archaic populations, possibly into very recent times. This implies also that at least some of the traces of archaic genetic markers still found in people today may have arisen as a result of intermixing of archaic and modern populations within Africa, rather than interbreeding of âpristineâ modern people with archaic populations only after leaving Africa. (Wells, 2012)

A new convert to this view is the paleontologist Chris Stringer, who only ten years ago was arguing that archaic hominins had long disappeared from Africa when modern humans began to spread into Europe and Asia. Today, the evidence cannot be easily ignored. There are too many skulls from western and southern Africa that look archaic and yet are surprisingly recent, like the Broken Hill cranium:

Other paleontologists, like Lily Malekfar, are similarly taking a second look at African cranial and skeletal remains that had previously been thought to be modern human:

Current research indicates that modern Homo sapiens originated in East Africa and then migrated across Africa as well as out of Africa, where they encountered archaic hominins. The Klasies River Main site (KRM) in South Africa is one location where there is evidence that modern and archaic Homo sapiens may have interacted. As Smith and other researchers have suggested, the KRM mandibular sample, in particular, exhibits significant size and morphological variability, which counters claims that the KRM specimens are fully modern.

[â¦] The results demonstrate that the KRM sample is markedly more variable than any of the comparative samples, which rejects the null hypothesis and is one possible indicator of an admixed sample at KRM. (Malekfar, 2012)

So just what is the story about modern humans and archaic hominins in Africa? Since DNA rapidly degrades in tropical climates, we will probably never retrieve DNA from those archaic skulls. But there is archaic DNA in living Africans, as Hammer et al (2011) discovered, so we may be able to piece together parts of the archaic African genome. Modern DNA can also tell us about ancient population movements within Africa, including the âbig bangâ that gave rise to modern humans some 60,000 years ago:

African mtDNA has three main lineages â L1, L2 and L3 â which have an estimated coalescence date of 126,000â165,000 yr BP. The L1 lineage is the most ancient and is present in the San population from South Africa and the Biaka Pygmies from the Central African Republic, which are two of the most genetically divergent populations in Africa18. L2 and L3 diverged from L1 ~60,000â103,000 yr BP. The L2 lineage is present in Mbuti Pygmies from the Democratic Republic of the Congo and in west African Bantu-speaking populations. The L3 lineage is widely dispersed throughout east Africa but is rare elsewhere in sub-Saharan Africa. Phylogenetic analysis indicates that the L3 haplogroup is the precursor of non-African mtDNA haplotypes and that a subset of this lineage (L3a) travelled out of Africa in the ancestors of modern Eurasians ~60,000â80,000 yr BP. The L3a lineage also occurs at a high frequency in Ethiopian mtDNA40, which supports the proposal that modern humans migrated out of Africa through Ethiopia. (Tishkoff & Williams, 2002)

It seems reasonable to speculate that a behavioral innovation appeared some 60,000-80,000 years ago in a subpopulation of anatomically modern humans, containing the ancestors of L3 (and possibly also L2), who had previously been living with a Middle Paleolithic/Middle Stone Age technologyâand that this small subpopulation subsequently expanded as a result.

There seems to have been a series of expansions, beginning around 80,000 years ago. The last expansion, dated to c. 60,000 BP and associated with subcluster L3a, was the one that spread modern humans out of Africa and to the rest of the world (Watson et al., 1997).

In summary, the evolutionary sequence can be described as follows:

1. Half a million years ago, all of Africa was inhabited by an archaic population similar to the Neanderthals in Europe and the Denisovans in Asia
2. Over time, these African hominins differentiated into two populations: (a) an evolutionarily conservative one in western and southern Africa; and (b) a more evolving one in eastern Africa.

3. Around 120,000 years ago, the eastern hominins expanded north into the Levant (Skhul-Qafzeh). They were now almost like modern humans. Their material culture was like that of the Neanderthals but their anatomy was almost modern, albeit with some archaic features.

4. Beginning around 80,000 years ago, a sub-population of the eastern hominins underwent a series of expansions. Then, around 60,000 years ago, a final “big bang” eclipsed the preceding ones and gave rise to true modern humans.

5. Within Africa, these modern humans initially expanded into territory inhabited by âalmost moderns,â i.e., people more or less modern in appearance while still largely archaic in behavior and material culture, like the Skhul-Qafzeh hominins of the Levant. Archaic admixture thus entered the gene pool of modern sub-Saharan Africans and today represents about 13% of the total.

6. As modern humans pushed farther into western and southern Africa, they encountered much more archaic hominins, almost like Homo erectus. There was less admixture from those archaics, only 2% of the total.

The Geography of the Noosphere
Anatoly Karlin
• 345 Comments
← The Sub-Saharan African Dental ComplexWere They Right After All? →
Hide 22 CommentsLeave a Comment
"Encounters Between Modern Humans and Archaics in Africa"
• 22 Comments
Commenters to Ignore
Commenters to ignore (one per line)

← The Sub-Saharan African Dental ComplexWere They Right After All? →
Current Commenter
says:
Current Date at Time Now
Leave a Reply - Comments on articles more than two weeks old will be judged much more strictly on quality and tone
Cancel Reply
Commenting Disabled While in Translation Mode