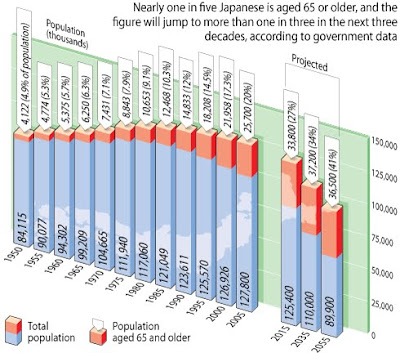 Today, East Asia is widely acclaimed for decade upon decade of economic success. Yet this success rests on a very fragile foundationâan aging population with the worldâs lowest fertility. This situation is viewed with surprising indifference by East Asians and Westerners alike. As with so many other things, we prefer to see tomorrow through yesterdayâs eyes.

Yet tomorrow is already here. Outside the big cities, East Asia looks more and more like an old folks home. This is especially so in Japan, where the median age is now 45. But populations are also graying throughout South Korea, Taiwan, Singapore, and most of China.

Nature abhors a vacuum. There will be pressures from within and without to open the doors to mass immigrationâall the more so because of the mounting influence of globalist thinking. To date, most of East Asia has resisted these pressures, probably because national identity is still relatively strong and the elites understand the consequences.

But the elites are changing. Theyâre following the same trend towards post-nationalism and globalism that is occurring in the West. As they identify less and less with their respective nation states, theyâll follow more and more their own interestsâand those interests wonât be the same as those of the mass of the population.

So, as East Asiaâs elites lose national consciousness, theyâre going to feel more and more encumbered by their nation states. And theyâre going to act on their feelings. This is already happening in South Korea, and Taiwan will probably follow suit. Itâs probably no coincidence that both countries have strong political, cultural, and ideological links with the United States.

What about the rest of East Asia? National consciousness seems to be strongest in China and, especially, North Korea. Ironically, both countries once saw themselves as proponents of internationalism. Yet, by submitting everything to State control, they unwittingly created a very conservative culture. Today, national feeling is better preserved in the former Communist bloc than in the West, as are many other traditional life ways.

In China, the decline of Marxist-Leninism has left a vacuum that is being filled in part by Western post-nationalism and in part by a resurgence of national feeling. The second trend seems to have grown stronger in recent years. One reason is that the elites are increasingly wary of the West, especially the United States. The other reason is that China can now produce its own high-quality movies, TV programs, and popular entertainment. This locally based cultural production gives a larger place to nationalistic and historical themes than is the case with cultural products imported from the West.

East Asia is thus being pulled in opposite directions by two irreconcilable ideologies. On the one hand, an elite-driven globalism is increasingly hostile to the nation state and even to the very existence of nations. On the other, an anti-globalist reaction is developing to defend the demographic status quo. There seems to be little room for compromise. The Pleasures of Depopulating the Earth
Larry Romanoff
• 294 Comments • Reply
← The Next East Asian DominoVitamin D Metabolism and Northern Nativ... →
Hide 37 CommentsLeave a Comment
"East Asia at the Crossroads"
• 37 Comments
Commenters to Ignore
Commenters to ignore (one per line)