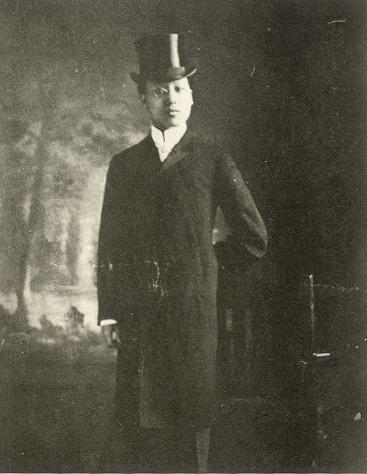 Syngman Rhee in 1905 and later South Koreaâs first president (1948-1960). Though born into a rural family of modest means, he was of yangban and even royal lineage (source).

Why is mean IQ higher in East Asia than elsewhere? Ron Unz (2013) sees the key cause in a scarcity of land and women that continually condemned the lower classes to reproductive extinction, particularly among the farmers who made up most of Chinaâs population. If a lineage remained poor for two generations in a row, it would die out and be replaced by downwardly mobile individuals from higher up on the social ladder. There was thus strong selection for men with enough business smarts to avoid poverty and amass enough assets to get married and have a family.

This model of selection seems valid for the Chinese but less so for the Koreans and the Japanese, whose strong class divisions should have impeded upward and downward mobility. Why, then, do these two other populations display similarly high mean IQ? As Unz (2013) notes:

Both the Japanese and the Koreans have done remarkably well in their economic and technological advancement, and also as small immigrant racial minorities in America and elsewhere. However, there is no evidence that rural life in either country had any of the major features possibly so significant for Chinese history, such as a total lack of feudal caste structure, an exceptionally commercialized system of agricultural production and land tenure, and the massive universal downward mobility due to equal division of property among male heirs.

Stripped down to its basics, the Clark-Unz model of selection has three key elements:

1. Class differences that reflect differences in intellectual performance.
2. A higher level of reproductive success in higher social classes than in lower ones.
3. No barriers to downward social mobility. The lower classes are thus gradually replaced by people of higher social origin.

But surely these three factors prevail everywhere? No, not at all. Hunter-gatherers and simple agricultural societies have little or no social stratification. Other societies are stratified but have no State that can monopolize the use of violence. Upward mobility is thus an ongoing free-for-all that selects for other psychological characteristics, i.e., ruthlessness, charisma, and ability to mobilize gangs of young men. Finally, still other societies are so stratified that downward mobility is impossible. This is the case with the caste system in India, where the shame of âlosing casteâ deters downward mobility. In addition, the lowest castes can afford to reproduce because certain stigmatized kinds of work are reserved for them, so there is no need to replenish their ranks with people of higher social origin.
How do Japan and Korea fit into this picture? Before the 19th century, both were feudal aristocracies where the elites monopolized the use of violence. For the bulk of the population, there was thus little selection for âBig Menâ, as is the case in societies where State formation is weaker. The question then remains whether Japan and Korea were caste societies. Did the lowest classes reproduce essentially on their own? Or were they replaced by a steady infusion of downwardly mobile individuals?
Among the Japanese lower classes, the Burakumin were the only real caste, in the sense of a group that lost few members through upward mobility and gained few through downward mobility. It is probably for this reason that the Burakumin differ so much from other Japanese in terms of behavior, personality traits, and intellectual performance. They seem to have preserved the mental and behavioral predispositions that were dominant in the Japanese population five hundred to a thousand years ago (see previous post).

Japan’s class structure seems to have resembled Britain’s. In both cases, there were attempts to codify class differences, and in both cases these attempts largely failed. The Britannica’s description of Japanese society in the 18th and 19th centuries sounds very much like premodern Chinese society:

Inevitably it [commercial development] meant the rise of some wealthy members of the rural populace, who used their wealth to invest in land and commercial ventures and to “ape their betters” in the cities in both custom and culture. Few farmers, however, prospered through producing commercial goods, and the majority of peasants remained impoverished. Rural villages were characterized by a few wealthy farmers, a majority of small-scale independent landholders, and a growing number of impoverished tenants. Many small-scale farmers, squeezed by the demands of commercial development, were forced to part with their lands and fell into tenancy. (Britannica, 1998)

A similar situation seems to have prevailed in Korea, even though the yangban were theoretically guaranteed a privileged status by virtue of their high birth or success on civil service exams. Moon (1992, p. 204) describes impoverished yangban living alongside peasants and commoners as fellow tenants. Breen (2004) likewise describes numbers of yangban sinking into poverty without hope of gaining a government office.

The way a society works in theory often differs from the way it actually works. English society has long been described as having rigid class distinctions. Yet when Clark (2009) analyzed the transmission of surnames by social class, he found evidence of considerable social mobility going back to the Middle Ages:

Clark, for example, denoted in the middle ages anyone performing clerical work, including the minor orders of the clergy who were allowed to marry. Since literacy was extremely limited in medieval England clarkwas thus originally an upper class name. But by 1600 0.7 percent of the indicted bear this surname, as many as among rich testators (0.63 percent). Of the 11 indicted Clarks in my sample, 7 had their occupation listed as laborer, thus illustrating the downward mobility of the medieval educated elite. There was also sign of upward mobility. Cookin the middle ages would likely not denote someone of particular wealth or status. By 1600, however it was the surname of 1.3 percent of the richest testators. Among the seven rich Cooks, five were described as Yeomen and one as a Gentleman. Even medieval and early modern England was thus a very fluid society, with families moving up and down the social scale across each generation. (Clark, 2009)

Clark, G. (2007). A Farewell to Alms. A Brief Economic History of the World, Princeton University Press, Princeton and Oxford