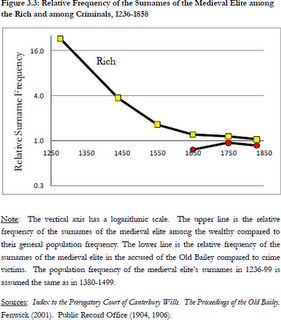 Henry Harpending (2012) argues that a meritocracy would become a caste society in a few generations:

Consider free meritocracy in a two-class system, meaning that for each generation anyone in the lower class who has greater merit than someone in the upper class immediately swaps class with them. Mating then occurs at random within class.

[â¦] Class mobility after the first generation is 30% while after four generations it has declined to 10% and continues to decline after that. The average merit in the two classes is about -1SD in the lower and +1SD in the upper on the original scale, corresponding to IQs of 85 and 115.

[â¦] after four generations, about 70% of the variance is between classes.

This model, however, contradicts what Clark (2009a) found in his historical study of surnames and social class in England. He first collected rare English surnames that were exclusive in the year 1600 to the rich (as represented by wealthy testators) or to the poor (as represented by common criminals). He then went forward in time to the year 1851 and determined the occupational profile of the same rare surnames:

How do the descendants of these two groups look in terms of socioeconomic status by 1851? Surprisingly there seems to be almost complete regression to the mean.

Why does this outcome diverge so much from the theoretical outcome described above? One reason is the assumption that marriage takes place only within each social class. Yet assortative mating is only a tendency, and exceptions are numerous. In post-medieval England, a widower would likely take a second wife of lower social status because of his disadvantaged position on the marriage market, given the care required for his existing children. It was also accepted for an upper-class man to marry a woman of lower rank, on the condition that she be beautiful. This phenomenon was noted by Darwin:

Many persons are convinced, as it appears to me with justice, that our aristocracy, including under this term all wealthy families in which primogeniture has long prevailed, from having chosen during many generations from all classes the more beautiful women as their wives, have become handsomer, according to the European standard, than the middle classes; yet the middle classes are placed under equally favourable conditions of life for the perfect development of the body. (Darwin, 1936 [1888], p. 892)

Another reason is downward mobility. In England, the upper and middle classes were reproductively more successful than the lower class until the late 19th century. But higher-class families could offer their children only a limited number of occupational slots. A certain proportion thus had to emigrate or move down the social ladder. The lower class was thereby continually replenished by the demographic overflow of the upper and middle classes.

Finally, the word âmeritâ has different meanings in different contexts. It is never just IQ. In post-medieval England, merit meant a mix of âmiddle-classâ values: thrift, self-control, future time orientation, and rejection of violence as a way to settle disputes (Clark, 2007; Clark, 2009a; Clark, 2009b). In other societies, merit may involve a different mix of predispositions and personality traits, such as ruthlessness and willingness to use violence.

Yet caste societies do exist. How do they come about? The main precondition seems to be not only the existence of social classes, but also a monopoly on certain occupations by each class. In such circumstances, downwardly mobile individuals cannot compete with the existing lower class, since the latterâs livelihood remains off-limits.

Take Japan. That country had a social evolution similar to Englandâs, i.e., gradual demographic expansion of the middle class and, correspondingly, gradual demographic replacement of the lower classes by downwardly mobile individuals. But the lowest class, the Burakumin, survived because it had a monopoly on occupations that involved taking life or handling dead bodies (e.g., leather working, butchery, undertaking, etc.). The Burakumin thus survive as a remnant of the majority Japanese population that existed several centuries ago.

Clark, G. (2009a). The indicted and the wealthy: surnames, reproductive success, genetic selection and social class in pre-industrial England. http://www.econ.ucdavis.edu/faculty/gclark/Farewell%20to%20Alms/Clark%20-Surnames.pdf