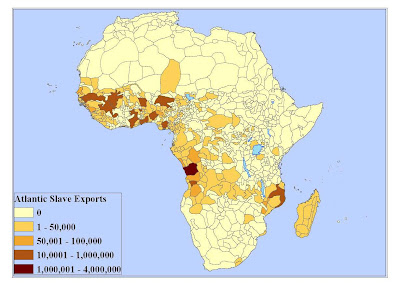 Slave exports to the Americas from different parts of Africa (Dalton & Leung, 2011). Did the slave trade create patterns of behavior that today exist throughout sub-Saharan Africa, such as generalized polygyny?

Why is polygyny so frequent in sub-Saharan Africa? As Goody (1973, p. 177) noted, the differences with Eurasia are striking:

In Europe and Asia, polygyny is largely but not exclusively an heir-producing device; often it is a way of replacing a barren wife. In Africa, plural marriage is far more generalised; according to Dorjahn, about 35 per cent of married men have more than one wife. Hence a large percentage of the population is likely to be part of a polygynous unit at some point in the life-cycle. Most men will be polygynously married at some time or other; women are yet more likely to be so. And most siblings will have sets of half siblings, both because of the plural marriage of their fathers and because of the remarriage of their mothers â since polygyny inevitably involves a large differential in the age of marriage, men will be older when they beget children than women are when they bear them. Hence there will be a higher proportion of widows and fatherless children.

Goody (1973) attributes this generalized polygyny partly to female self-reliance in food production. Year-round farming enables women to provide for their own needs and those of their children. A wife thus costs little in terms of upkeep, and this low maintenance cost encourages men to have as many wives as possible.

Goody (1973, p. 185) concludes that âhoe agriculture, female farming and polygyny are clearly associated in a general wayâ but there must be other explanatory factors. But what?

For Dalton and Leung (2011), one big factor is the slave tradeâthe mass exportation of African laborers that ended only two centuries ago. West Africa tended to export male slaves while East Africa tended to export female slaves. This pattern reflected differences in market demand: on the one hand, the Americas wanted farm labor; on the other, the Middle East and South Asia wanted domestics or concubines. These differing sex ratios might therefore explain why polygyny is less frequent in East Africa than in West Africa:

The slave trades existed for hundreds of years, and, as a result, Africa experienced abnormal sex ratios for long periods of time. Polygyny could have emerged or been strengthened during the long period of abnormal sex ratios. Figures 1 and 2 suggest the Western Coast should have contained more polygynous marriages, whereas the Eastern Coast should have contained fewer.

These abnormal sex ratios returned to normal once the slave trade had ended in the early 19th century. Why, then, didnât polygyny rates follow this return to normal? Dalton and Leung (2011, p. 8) blame cultural conservatism: âOnce these cultural traits are established, polygyny can become self-sustaining.â

This hypothesis is interesting and might explain some of the variation in polygyny rates within sub-Saharan Africa. But it fails to explain why polygyny rates are in the double-digit range throughout sub-Saharan Africa. East Africaâs rates are lower but still high by world standards. Goody (1973, p. 181) states that East African cattle societies have a rate of 24.7%, i.e., the percentage of married men with more than one wife. Pebley and Mbugua (1989) similarly write: âThe frequency is somewhat lower in East and South Africa, although 15 to 30 percent of husbands are reported to be polygynists in Kenya and Tanzania.â

Admittedly, the above figures run counter to the ones offered by Dalton and Leung (2011, p. 1):

These figures come from the latest âDemographic and Health Surveysâ and are twenty to forty years more recent than the other figures. As such, they reflect the decline in female farming and the growing urbanization of African societies. In this new context, institutionalized polygyny has given way to looser arrangements with multiple girlfriends and/or prostitutes. And why bring Ethiopia into the comparison? It is not a sub-Saharan country and differs from both West and East Africa in many ways, notably the long-established influence of the Coptic Church and Christian sexual norms.

1. The ratio of Y-chromosome to X-chromosome variability is much higher among sub-Saharan Africans, New Guineans, and Aboriginal Australians than among other human populations. This suggests a long-lasting trend of fewer men than women contributing to the gene pool (Dupanloup et al., 2003; see also Torroni et al., 1990; Scozzari et al., 1997).

3. A high level of male-male competition for females is suggested by the increased sexual dimorphism of African Americans for weight, chest size, arm girth, and leg girth (Todd & Lindala, 1928; Wolff & Steggerda, 1943). In contrast, a small, gracile, and almost childlike body characterizes Khoisans and Pygmies, the only sub-Saharan populations with low polygyny rates.

After arguing that the slave trade caused generalized polygyny, Dalton and Leung see therein a leading cause of Africaâs lag in economic and social development.

There is undoubtedly some kind of relationship between generalized polygyny and Africaâs stubbornly high fertility and economic poverty, but itâs not a simple one of cause and effect. Banning polygyny will not cause immediate changes to reproductive and economic behavior. Dalton and Leung themselves argue that cultural conservatism alone has maintained high polygyny rates in Africa for the past two centuries. Wouldnât the same be true for other behaviors?

Remember also that the time depth of generalized polygyny is not the four or five centuries that Dalton and Leung claim. In sub-Saharan Africa, high polygyny rates are associated with âfemale farmingâ societies, and such societies began to spread outward from a point of origin near the Nigerâs headwaters some 6,000 to 7,000 years ago (Murdock, 1959, pp. 44, 64-68).

The question doesnât seem to have crossed the authorsâ minds. They seem to believe, a bit naÃ¯vely, that there is only cultural conservatism to worry about. No less naÃ¯ve are the authors they cite:

Nunn and Wantchekon (2010) examines a particular channel through which the slave trades impact current African economic performances, namely the levels of trust across individuals within Africa. Trust supports economic exchange in well-functioning markets and would have plausibly been affected within groups living in the capture and export economies participating in the slave trades. Nunn and Wantchekon (2010) shows those individuals whose ancestral groups experienced higher slave exports exhibit lower levels of trust even to this day. Our paper contributes to these findings by suggesting an additional channel through which the slave trades have had a long-term impact on current African society. (Dalton & Leung, 2011, p. 2)

Low trust is typical of all simple, clan-based societies. Papua-New-Guinea was not affected by the slave trade, yet it has very low levels of trust. The slave trade may indeed have made people less trusting in some parts of sub-Saharan Africa than in others. But this does not explain why levels of trust are so low in sub-Saharan Africa as a whole.

And questions can be raised about the study by Nunn and Wantchekon (2010). Those authors found that willingness to trust members of other ethnic groups correlated with an ethnic groupâs historical importance as a source of slaves. Most slaves, however, were taken during inter-tribal wars, and such wars generally occurred in regions already prone to interethnic conflict.

In short, the correlation is valid, but it doesnât prove the causal relationship that Nunn and Wantchekon infer. In fact, the line of causality probably runs in the opposite direction.

Dupanloup, I., L. Pereira, G. Bertorelle, F. Calafell, M.J. Prata, A. Amorim, & G. Barbujani. (2003). A recent shift from polygyny to monogamy in humans is suggested by the analysis of worldwide Y-chromosome diversity. Journal of Molecular Evolution, 57, 85-97. ← Whither Evolutionary Psychology?No, They Aren't Pure Either →
Current Commenter
says:
Current Date at Time Now
Leave a Reply - Comments on articles more than two weeks old will be judged much more strictly on quality and tone
Cancel Reply
Commenting Disabled While in Translation Mode