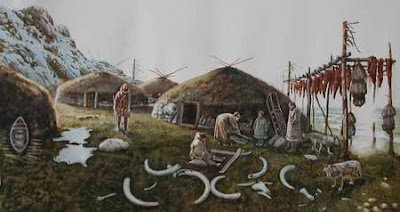 Modern humans changed little when they initially spread out of Africa and into the Middle East. Real change occurred farther north, when they entered seasonally varying environments that differed much more even in summer.

Three years ago, a research team led by John Hawks found that the rate of genetic change accelerated once ancestral humans had spread from Africa to the other continents. Over the past 40,000 years, natural selection seems to have altered at least 7% of our genome. And this process speeded up even more as agriculture replaced hunting and gathering over the past 10,000 years. The rate of genetic change then increased more than a hundred-fold (Hawks et al. 2007).

This finding, however, seems to be at odds with a recent Scientific American article by Jonathan Pritchard:

As early Homo sapiens spread out from Africa starting around 60,000 years ago, they encountered environmental challenges that they could not overcome with prehistoric technology.Many scientists thus expected that surveys of our genomes would reveal considerable evidence of novel genetic mutations that have recently spread quickly through different populations by natural selection [â¦]

But it turns out that although the genome contains some examples of very strong, rapid natural selection, most of the detectable natural selection appears to have occurred at a far slower pace than researchers had envisioned.

Is there a fundamental disagreement here between Jonathan Pritchard and John Hawks? Perhaps not. Pritchard doesnât actually deny that genetic change accelerated in ancestral humans. He simply states that its pace has been far slower than the one envisioned by âresearchers.â

Curiously, he makes no reference to John Hawks. This is all the more curious because no one else matches the unnamed âmany scientistsâ and âresearchers.â Until three years ago, and even today, the conventional view has been that cultural evolution replaced genetic evolution in our species. Culture provided us with faster ways to adapt. Instead of changing our genes, we changed our environment by means of new technologies, modes of subsistence, forms of shelter, and so on.

Thatâs what I learned as an undergrad. If Pritchard wishes to argue against Hawksâ position, why not mention him by name? Why create a fictitious âconventional viewâ that needs to be put in its place?

I see other weaknesses in this Scientific American article, particularly in the methodology behind its conclusion that human genetic evolution has been relatively slow. One is recognized by Pritchard himself. What matters is not the degree of change at a single gene, but rather the total change at all genes that influence a single trait:

A series of papers published in 2008, for example, identified more than 50 different genes that influence human height, and certainly many more remain to be found. For each of these, one allele increases average height by just three to five millimeters compared with the other allele.

When natural selection targets human height [â¦] it may operate in large part by tweaking the allele frequencies of hundreds of different genes. If the âshortâ version of every height gene became just 10 percent more common, then most people in the population would quickly come to have more âshortâ alleles, and the population would be shorter overall.
(Pritchard 2010)

Another weakness is the impossibility of measuring the rate of genetic change directly:

It would be great if in our efforts to understand recent human evolution, we could obtain DNA samples from ancient remains and actually track the changes of favored alleles over time. (Pritchard 2010)

Because this approach is still in its infancy, Pritchard falls back on assumptions about when and where human populations have come into being. He assumes that Homo sapiens began to spread out of Africa some 60,000 years ago and then split into Europeans and East Asians some 20,000 to 30,000 years ago. These are the baselines he uses to calculate the rate of genetic change.

But these are high-end estimates. The âOut of Africaâ event is probably closer to 45,000 BP (1) and the best dating for the European/East Asian split is 20,000 BP (Laval et al. 2010) (2). Moreover, natural selection has not changed non-African humans at a constant rate since their ancestors left Africa. Those who remained within the tropical zone, such as Australian Aborigines, Papua-New Guineans, and Andaman Islanders, have changed surprisingly little. There has been much more evolution among those who spread out of the tropical zone and into temperate and arctic environments, beginning around 30,000 BP. Evolutionarily speaking, the key event was not when humans began to spread out of Africa. It was when they began to spread out of the Tropics (3).

2. Maps of human prehistory typically show two lines of advance out of Africa: one turning left and into Europe and another turning right and into South Asia, Southeast Asia, and East Asia. The second line of advance did exist, but was not ancestral to present-day East Asians. It was instead ancestral to relic groups like the Andaman Islanders and the Semang, as well as Papua-New Guineans and Australian Aborigines.

East Asians, like the Inuit and Amerindians, have their origins in North Asia, as seen by their âArcticâ physiognomy. These early North Asians in turn came from early Europeans, specifically the reindeer-hunting nomads who spread eastward through the steppe-tundra belt of northern Eurasia. In other words, Europeans and East Asians are not siblings who parted company in the Middle East some 45,000 years ago. The latter are instead âoffspringâ of the former, the two groups having become reproductively isolated from each other at the height of the last ice age, c. 20,000 BP.

3. In sum, the âOut of Africaâ event did not occur when modern humans first ventured across the present-day Suez Canal. This is an arbitrary line based on current geopolitical realities. Ecologically speaking, the Middle East is part of Africa. Real adaptive change did not begin until modern humans had spread farther north and into environments with wide seasonal variations in temperature, vegetation, wildlife, and other resources.