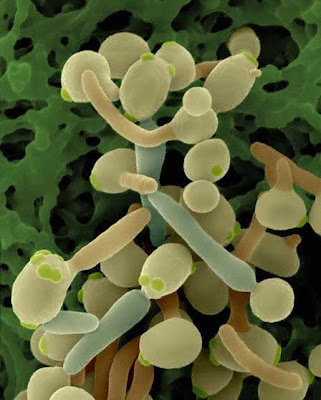 Candida albicans. Some strains have adapted to sexual transmission. Have they gone so far as to manipulate host behavior?

Although C. albicans can colonize many body sites, some strains have specifically adapted to the vagina. This evolutionary trajectory seems to have gone through three levels of adaptation:

Vaginally adapted strains are a small subset of C. albicans. In China, two strains account for almost 60% of all VVC cases, yet neither is present at extragenital sites (Li et al., 2008). In the United States, C. albicans strains are much more diverse in the male partners of women without VVC than in the vaginas of women with or without VVC (Schmid et al., 1993).

Although a relationship clearly exists between sexual behavior and VVC, it is not a simple one of cause and effect. This is the conclusion of two research teams, Hellberg et al. (1995) and Reed et al. (2003), who sought to identify those aspects of sexual behavior that correlate with VVC.
Hellberg et al. (1995) found no significant association between VVC and the main indicators of vaginal sexual activity: (1) frequency of vaginal sex; (2) history of multiple sexual partners (more than 10 lifetime partners); and (3) sex with more than one partner during the last six months.

If the association between orogenital contact and recurrent Candida vulvovaginitis is not mediated by transmission of the organism, how might increased risk be conferred? Previous study of the immunopathogenesis of recurrent Candida vulvovaginitis suggests that a delicate equilibrium exists among C. albicans, vaginal bacterial flora, and vaginal defense mechanisms, and that changes in the host environment promote the transformation of C. albicans from a saprophytic to a pathogenic existence. We suggest that the effects of genital washing with salivaâfrom either the male or the femaleâmight upset this balance [â¦] (Reed et al., 2003)

To make sense of all this, we should perhaps reverse the direction of causality. Perhaps some vaginal strains of C. albicans have reached a third level of adaptation, i.e., manipulation of host behavior to increase opportunities for sexual transmission. Perhaps they somehow weaken the hostâs sexual inhibitions and incite her to maximize contact between her vaginal fluids and colonizable sites on her partnerâs body.

Does this sound like science fiction? Keep in mind that parasites manipulate host behavior in many non-human animals, and some of these parasites are likewise fungi (see here). Moreover, C. albicans has evolved the ability to cross the blood-brain barrier and colonize sites in the human brain (Jong et al., 2001). According to an autopsy of macaque brains, this microbe can recognize different kinds of neural tissue:

An ex vivo adhesion assay was used to examine adhesion of Candida albicans yeast cells to brain tissue of the primate Macaca mulata. Tissues from frontal lobes and striatum (caudate, putamen, and portions of the globus pallidus) were used in the assay. Yeast cells adhered to gray matter at about six times the level of adhesion to white matter. The fungus was able to bind to different cell types within the cortex, basal ganglia, and white matter. (Denaro et al., 1995)

One can imagine a multi-stage process of development:

1. âBehavior-modifyingâ C. albicans colonizes the vagina as a commensal organism with low virulence and no VVC. The ensuing period of latency might last a long time.

2. Meanwhile, the microbe spreads to other sites within the hostâs body, including certain areas of the brain that influence sexual behavior.

3. Once this secondary colonization is complete, the area of primary colonization enters a highly infectious stage, i.e., VVC. The microbe is now ready to spread to her sexual partner.

And how will it influence her partnerâs behavior? We cannot find the answer by studying his behavior before and during VVCâas in current studies. We must examine his subsequent behavior, i.e., once this strain of C. albicans has spread to his body and replaced other strains. Are there any behavioral changes?

But, then, what sort of changes should we expect?