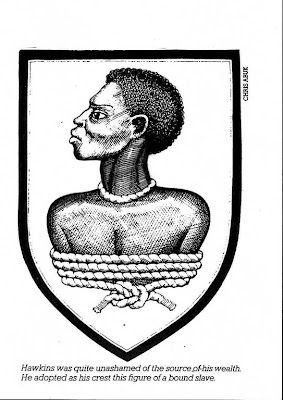 Sir John Hawkins (1532-1595) was instrumental in bringing England into the slave trade. Was this trade a source of new pathogens for the English population?

Some vaginal strains of Candida albicans have become better at sexual transmission, such as through improved adhesion to saliva-coated surfaces and through displacement of non-vaginal strains in a new host.

But the adaptations donât stop there. In my last two posts, I argued that these strains have also become better at sexual transmission by manipulating host behavior. They can cross the blood/brain barrier. We know this. Once inside the control room, why not go one step farther?

C. albicans is an ideal candidate for such evolution. First, Itâs common. Thereâs a large pool of genetic variants for natural selection to act upon.

Second, C. albicans has developed the capacity to spread from one host to another through intimate contact. It thus has every reason to enhance this capacity by rewiring its hostâs neural circuits, even at the cost of doing much harm.

For decades medical science was dominated by the doctrine of “commensalisms’ – the notion that the pathogen-host relationship inevitably evolves toward peaceful coexistence, and the pathogen itself toward mildness, because it is in the germ’s interest to keep its host alive. This sounds plausible, but it happens to be wrong.

[â¦] If you’re a germ that can travel from person to person by way of a “vector,” or carrier, such as a mosquito or a tsetse fly, you can afford to become very harmful. This is why, Ewald argues, insect borne diseases such as yellow fever, malaria, and sleeping sickness get so ugly. Cholera uses another kind of vector for transmission: it is generally waterborne, travelling easily by way of faecal matter shed into the water supply. And it, too, is very ugly. (Hooper, 1999)

An infectious organism will thus try to turn its host into a launching pad for infection of other hosts. The long-term survival of any one host no longer matters.

One of my commenters, Jim Bowery, suggested that the pathogen could have entered England via the West African slave trade. Indeed, an argument can be made that sexually transmitted diseases are most likely to develop in high-polygny societies, such as exist among the âfemale-farmingâ peoples of sub-Saharan Africa. On the one hand, the polygynous male cannot sexually satisfy all of his wives. On the other, many young males are locked out of the marriage market, the result being a lot of sex on the sly.

The temporary celibacy of young men in polygynous societies is rarely absolute, however. While it often postpones the establishment of a stable pair-bond and the procreation of children, it often does not preclude dalliance with unmarried girls, adultery with younger wives of older men, or the rape or seduction of women conquered in warfare. Thus, what sometimes looks like temporary celibacy is, in fact, temporary promiscuity. (van den Berghe, 1979, pp. 50-51).

Is manipulation of sexual behavior a logical adaptation for STDs? If so, have other human STDs evolved in this direction? No one seems to have asked the question. Admittedly, cause and effect are hard to tease apart. Do STDs correlate with sexual promiscuity solely because a promiscuous person is more likely to catch one? Which is the chicken and which is the egg?

Research on insects has turned up several cases of an STD manipulating host behavior in order to facilitate sexual transmission.

Behavioural changes associated with parasitic infection are well known, and at least some of these appear to be adaptations on the part of the parasite to increase transmission (Moore, 1993, 2001; Poulin, 1994a, b, 1998a, 2000). Four recent studies of insect STDs are relevant here. McLachlan (1999) showed that male midges (Paratrichocladius rufiventris) infected with the mite Unionicola ypsilophora were more likely to be in mating pairs than uninfected males. As discussed earlier, the mites rely on female midges to return them to water to complete their life cycle. If they find themselves on a male midge, therefore, they are effectively dead unless their host mates with a female [â¦].

Raina et al. (2000) found that Hz-2V infected female corn earworm moths Helicoverpa zea produce two to three times more sex pheromone than uninfected female moths, possibly enhancing their ability to attract male moths, although they also reported that these animals vigourously resisted mating. Abbot & Dill (2001) found that male Labidomera clivicollis beetles infected with the mite Chrysomelobia labidomera were more likely to displace other males from mating pairs, which again could be interpreted as being adaptive manipulation of the host by the parasite to increase transmission. Webberley et al. (2002), by contrast, found that infection of Adalia bipunctata with Coccipolipus hippodamiae did not have any effect on the mating behaviour of the host. (Knell & Webberley, 2004)