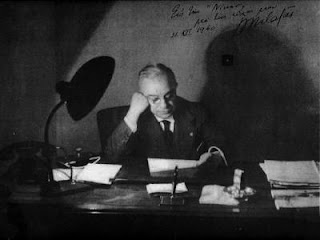 The Ioannis Metaxas regime (1936â1941) was the high-water mark of Greek nationalism. It sought to create an emotional bond between Greeks and their nation that they had previously felt only for their families and immediate kin. In this, Metaxas was trying to replicate a process of nation-building that had happened over a much longer time in Western Europe. (source)

Greece is a young nation. This statement may seem absurd, since the Greeks have a long history that goes back thousands of years. For most of that time, however, they existed as an ethnic community within larger multicultural states that were often ruled by non-Greeks. This was especially so during the centuries of Muslim rule under the Ottoman Empire.

The Ottoman Empire allowed its subject peoples much freedom to manage their affairs, but this self-government seldom rose above the local level. It was at this level that the Greeks were accustomed to running their livesâwithin the family, at the church, and among fellow villagers.

Above the local level, there was only a weak sense of common identity. And this broader identity was more religious than ethnic. While people were almost always sure of their religion, they were often less sure of their ethnicity. Many Orthodox Christians would alternately identify themselves to census takers as either Greeks or Macedonian Slavs (Jelavich & Jelavich, 1977, p. 208). Slavs became âGreekâ by attaining a certain level of education, which typically was dispensed in that language (Jelavich & Jelavich, 1977, pp. 14-15).

In addition, a common ethnic identity could not easily develop in a land where Greeks had to live with other people. This was the case over most of present-day Greece. Almost half the population of Crete was Muslim, and the same was true for Western Thrace, and parts of Macedonia. Elsewhere, Christian Slavs or Albanians often predominated. Co-existence with Muslims was possible, but it came at a high cost. As Jelavich and Jelavich (1977, pp. 5-6) note:

In the decaying Ottoman Empire individual Muslims often suffered as much as their Christian counterparts did from bad government, but they still enjoyed important basic privileges, such as a far better chance in court, fewer taxes, and a recognized superior status. [â¦] Christians, however, usually were supposed to observe certain prohibitions that were as galling to their personal pride as to their material interests. For instance, in theory they could not bear firearms, wear conspicuous or rich clothes, or don the color green, sacred to the Muslims. They were supposed to dismount when passing a Muslim on horseback; their houses could not be richer than or overlook those of their Muslim neighbors. Christian churches could not have bells or belltowers; new churches were not to be built, but old ones could be repaired.

Just as ethnic identity often extended no farther than the fields around oneâs village, the same little world also circumscribed one’s zone of relative peace and security. People disliked venturing too far from home, for fear of bandits. Many of these outlaws were Greeks, but the most powerful ones were Muslimsâin general, discharged soldiers for whom banditry was little different from soldiering. Some of them ruled over large stretches of territory and commanded their own private armies. In time, especially during periods of weakness, the Ottoman Empire would regularize their existence by appointing them to official posts. There was thus no fine line between banditry and State power. The State itself ruled by virtue of force, and not by consent of the governed.

This old order ended with the War of Independence (1821-1829) and the creation of a Greek state. Nation-building would take place over a shorter time than it had in Western Europe. It would also be a more deliberate process. Finally, it would involve a more explicit rejection of the old orderâa time when Greeks didnât have their land all to themselves.

Initially, the new state was Greek only in name, being a protectorate of Great Britain, France, and Russia under a Bavarian king with a foreign-staffed civil service and army. Greeks would not run their own country until the late 1830s, and a democratically elected legislature would not be formed until 1844.

As citizens and as voters, the average Greek would now have to assume responsibilityâespecially financial responsibilityâfor a much larger circle of people who were neither family members nor neighbors. The only common denominator was a sense of shared citizenship. The result?

In 1838 Greek finances had been put under a French supervisor, Artemonis de Regny. By 1843 the entire financial situation of the country was disastrous. With the exception of a single year the state had been run on deficit spending. Payments on the loan had been suspended for four years. (Jelavich & Jelavich, 1977, p. 75)

The financial problem became increasingly serious. By 1892 the service on the debt took a third of the budget. In the next year Greece was bankrupt. (Jelavich & Jelavich, 1977, p. 173)

The problem wasnât that Greeks were financially irresponsible. The problem was that they had previously exercised financial responsibility within the confines of a small community, or simply an extended family. A bad decision would primarily impact close relatives, who could easily retaliate. There was thus a system of checks and balances that just did not work in the new Greece.

Greeks were now interacting within a large social and economic environment while maintaining the mental reflexes of a much smaller one. People thought long and hard before dealing with strangers (and for good reason). They instead preferred to deal with other family members, even when a non-relative might be more competent. The worst part was that these family networks would conspire to plunder collectively owned goods, starting with the public treasury and extending to almost any space of social interaction. Beyond the world of oneâs immediate kin, Greece was still a low-trust society, and a low-trust society is necessarily a poorer one.

To overcome this problem, Greek nationalists sought to strengthen national identityâto extend to the entire nation the sort of trust and emotional bonding that was normally felt towards oneâs family. In short, they wanted to replicate the cultural evolution that the West had gone through. They wished to create a large nation-state with a correspondingly large society where one could easily interact with, and trust, complete strangers.

To this end, it was felt necessary to assimilate the countryâs Christian minorities and expel its Muslim minority. This process had already begun during the War of Independence, with massacres of Muslim civilians being among the first acts of the Greek rebels (Jelavich & Jelavich, 1977, p. 440). It continued through a process of Turkish reprisals and Greek counter-reprisals, culminating in a mass exchange of populations between Greece and Turkey in 1922-1923.

Meanwhile, a national educational system was designed with a common curriculum. The Greek language was standardized, and steps taken to replace Turkish and Venetian loan-words with terms of Greek origin. Historic sites were made accessible to the public and used to instill national pride. In all this, Greece was following the example of Western nation-states.

Metaxas and the high tide of Greek nationalism

Greek nationalism reached its height under the Ioannis Metaxas regime (1936â1941). This period saw the use of organized youth activities, modern media, and popular art to promote national sentiment. By 1941, over one sixth of all Greeks were wearing the dark blue uniform of the national youth movement (EON). Metaxas himself became the focus of a personality cult that presented him as the âFirst Peasant,â the âFirst Worker,â and the âNational Father.â

Metaxas blamed the failures of the past 100 years on Greeks pursuing narrowly defined self-interests at the expense of the nation as a whole. This pursuit of personal freedom impoverished Greek society and actually made everyone less free. His political philosophy is summarized by Sarandis (1994, pp. 151-152):

The individual must merge with the whole, and his own will was to be submitted to that of the nation. No one would be absolutely free and no individual could exist outside the state. Everything constituted part of the state, through which alone the will of the Greek people would be expressed. And this collective national will transcended the present and was independent of the living components of the nation, since it represented the volition not only of this era but also of the people of previous generations through thousands of years of history. Furthermore, individuals would subordinate their interests and suppress their own appetites and selfishness before the national collective welfare; only thus could they be powerful and consequently free.

This was clearly a Greek variant of fascism, even though Metaxas would later defend his country against fascist Italy. Today, such thinking might seem absurd, especially the notion of gaining freedom by suppressing freedom. Yet Metaxas was addressing a real problem. He wanted to stop the plundering of collective resources and turn Greece into the kind of high-trust society that older nation-states took for granted.

Metaxasâ legacy would last long after his untimely death in 1941. As growing numbers of tourists flocked to Greece during the postwar era, they were enchanted to find a nation with a strong sense of history and shared identity. They assumed this Greece was age-old, when in fact it had scarcely existed a half-century before.