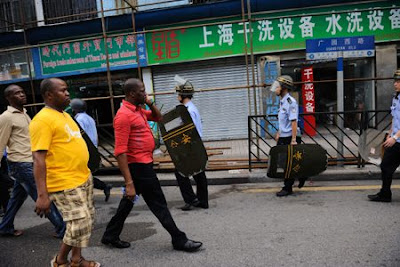 In my last post, I predicted that China will undergo the same kind of demographic transition that is occurring in other developed countries. This transition will be characterized by:

2. A heavy influx of immigrants from poorer regions of the world with higher fertility, mainly sub-Saharan Africa but also parts of south and southeast Asia.

3. A process of population replacement that will be most apparent in the large conurbations of southern China. Many urban districts will become minority Chinese.

This scenario may seem hard to believe. After all, with a billion or so people, the Chinese have a long way to go before becoming strangers in their own land. Yet this scenario does seem plausible if one looks at its underlying causes:

For thirty years now, China has had a fertility rate well below replacement level (1.6 children per woman for the whole country and significantly lower for non-Muslim Han). Although this low fertility is often attributed to the 1-child policy, fertility is equally low in Taiwan, Hong Kong, and Macaoâwhere this policy has never been applied.

There is no reason to believe that the fertility rate will rise in the near future and every reason to believe that it will fall further. Fertility has already fallen to the 1.0 mark in the urban areas of southern China, and these areas tend to be at the forefront of cultural changes that later spread to the rest of the country. In many ways, China is undergoing a ârevolution of rising expectationsâ similar to the one that swept through the Western World in the 1960s. Everyone wants a car, designer clothes, and other showy consumer goods. As in the West, the average Chinese couple will try to fulfil these expectations by having their children later, or by not having any at all.

Whatever the prospects for continuing fertility decline, China has already had thirty years of sub-replacement fertility and women now reaching childbearing age themselves come from 1-child families. There is no longer any momentum left in Chinese population growth. China, particularly southern China, thus seems poised for substantial population decline and this decline, combined with high economic growth, will open up room in the job market and in housing estates for migrants from elsewhere.

In the past, these migrants came from rural China. Will this internal migration continue? To some extent, yes, but it will probably not be enough to fill the looming labor shortages. With rising prices for food and other commodities, many rural people will choose to stay put. Furthermore, labour shortages will be most acute in those industries that offer the lowest wages and the poorest working conditions. The temptation will be strong to fill those jobs with workers from abroad. Similarly, housing vacancies will open up in old, substandard tenements that are disdained by upwardly mobile Chinese but not by immigrants.

And such immigrants will show up on their own. Since the year 2000, there has been a marked rise in immigration, particularly from sub-Saharan Africa. Guangzhou alone has an African community of over 100,000 people. This immigration is partly due to the wide gap in living standards between China and sub-Saharan Africa. But it is also due to the special relationship that has developed between these two world regions.

Since 1991, the Chinese foreign ministerâs first visit abroad each year has always been to the African continent. When the Chinese leadership realised that increasing amounts of oil, gas and other minerals were needed to sustain the booming economy, resource-rich Africa again garnered much attention from Chinaâs decision-makers. After China lost its long-cherished status of energy self-reliance in 1993, the pressure of supply diversification forced major Chinese national oil companies to scour the world for petroleum. [â¦] Chinaâs crude oil imports from Africa have increased at an astonishing rate of 23 per cent annually since 1993, reaching 53 million tons (mt) in 2007. As a result, Africaâs share of Chinaâs crude imports rose sharply from 18.5 per cent in 1993 to 32.5 per cent in 2007. In most of 2006, Angola even surpassed Saudi Arabia, to become Chinaâs largest overseas crude oil supplier. In 2007, China imported an unprecedented 25 mt of crude oil from Angola, a level only 5 per cent lower than the quantity coming from Saudi Arabia. (Tu, 2008)

There is increasing worry among Chinese policy-makers about the fragility of this special relationship, in particular its vulnerability to incidents of anti-black racism in China. According to Tu (2008):

The absence of open debate about such discrimination poses an important challenge to Chinaâs interactions with African countries, especially at the societal level. Thus, to prevent unchecked spread of racism in China, a top-down paradigm shift of Chinaâs decision makers is urgently needed, a bottom-up soul-searching process of Chinese civil society as a whole is also required.

Interestingly, although Tu refers to an âunchecked spread of racismâ, he makes no direct reference to the rapid growth of the African community in China. There seems to be a tendency to frame the debate in terms of controlling âracismâ rather than controlling immigration. This tendency is all the more unusual because Bodomo (2009) found little evidence of anti-African discrimination in Guangzhou. In fact, local Chinese tended to excuse behavior in Africans that they would not accept in other Chinese. This came out in an interview with a shop assistant who mainly deals with Africans

Before working in this shop, Ms Li dealt with Chinese customers in a similar type of shop. When asked the difference between doing business with Chinese and Africans, she complains about the Africans. Firstly, she mentions that many of the African customers do not keep their promises. For example, they may request the company to supply them goods within a week but they do not come and collect their goods on time. Secondly, after producing goods for them, they may say they do not have the money in hand. According to her, some Africans, who believe in Christianity, sometimes handle things âin the name of Godâ. Besides, getting along with African customers is also hard for her. It is because to Ms Li, the Africans are too direct when meeting someone of the opposite sex. She recounted her experience of being asked by her African customers to give them her phone number and address even during their first meeting with her. Some even declare: âI love youâ to her even on their very first day of meeting, a behaviour she can hardly bear with as a Chinese.

Another factor is the emergence of Africans themselves as a lobby for further immigration. Bodomo (2009), himself an African established in China, makes this point in his survey of the Guangzhou African community:

As the Guinean leader pointedly indicated, âChinese [leaders] think that Africans can do business in China without being in China and this is an error. 90 per cent of Africans in Guangzhou act as some kind of intermediary between the local businessmen in Africa and the Chinese factory, the Chinese businessmen there. Without Africans in China there is no business between Africa and China.â This was one of the clearest statements as evidence in support of our theoretical argument about Africans in Guangzhou acting as bridges for business connections between Africans and Chinese.

â¦ Both the Chinese government, on the one hand, and the African governments, on the other, could harness these important roles played by the community, and address the challenges they are facing, such as unrealistic visa and residency restrictions (they are given only 6-month visas, for instance) and generally unclear paths to permanent residency and citizenship, to enhance the growing economic relations between Africa and China. The African trading community in Guangzhou serves as a salient emerging bridge between Africa and China that cannot continue to be ignored in efforts to effectively develop socio-economic relations between Africa and China.

Bodomo, A. (2009) The African Trading Community in Guangzhou (??): An Emerging Bridge for Africa-China Relations, accepted (October 2009) for publication in China Quarterly.http://www.hku.hk/linguist/staff/ChinaQuarterlySubmission2009ResearchPaper.doc ← China and Interesting Times. Part IIHas China Come to the End of History? →
Current Commenter
says:
Current Date at Time Now
Leave a Reply - Comments on articles more than two weeks old will be judged much more strictly on quality and tone
Cancel Reply
Commenting Disabled While in Translation Mode