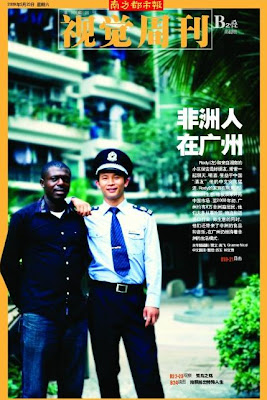 In China, besides Beijing, African communities have become a reality in cities such as Shanghai and Hong Kong (Bertoncello and Bredeloup 2007, Bodomo 2007a). There are now more Africans and people of African descent in southern Chinese cities such as Hong Kong, Macau and particularly Guangzhou (Bertoncello and Bredeloup 2007, Bodomo 2007b, Li et al 2008) than in any other part of China.

â¦ One common theme cutting across most of the earlier studies on modern African communities in China mentioned above is an emphasis on the novelty of the situation. While it is true that Africans have existed in China, including students and diplomats, among others, for a long time, we have never had, until now, a massive presence of Africans of all walks of life actually migrating to China to start up businesses serving Africans and Chinese alike. A key word that cuts across most of these studies is âemergenceâ, signifying the novelty and freshness of the phenomenon of African migration into China and the formation of communities there (Bodomo, 2009).

In recent years, China has emerged as a major world power and predictions are being made that it will soon become the worldâs leading economy. This trend is a source of much pride for the Chinese themselves, who feel their nation is finally coming into its own after years of stagnation and foreign domination. But the pride may be short-lived. With the worldâs lowest fertility rates, a booming economy, and economic dependence on a continent that has the worldâs highest fertility rates, everything is in place for rapid population replacement. The past decade has already seen the establishment of a large African immigrant community, which numbers over 100,000 in Guangzhou alone (Bodomo, 2009). If current trends continue, China will eventually become a mere administrative unitâa managerial stateâlike so many other countries. It will no longer be a vehicle for a specific people, culture, and civilization.

This prediction should come as no surprise. Although world fertility rates have declined over the past half-century, this decline has been spread very unequally, with most of it being in Europe, East Asia, and their respective overseas populations. In particular, Sub-Saharan Africa has experienced very little fertility decline, with the result that its population growth greatly exceeds the growth of its economic base. Many sub-Saharan Africans thus have no choice but to move elsewhere. Whereas this current of emigration used to flow mainly toward the ex-colonial powers, particularly France and Great Britain, it is now spreading to other destinations. North Africa has ceased to be a zone of transit for these emigrants and is becoming a de facto zone of settlement, particularly Libya but also Morocco and Algeria. The same is true for much of southern Europe: Spain, southern Italy, Malta, and Greece. Large communities are also appearing in Israel, the Gulf States, Mumbai and elsewhere in south and southwest Asia. In short, what will happen to China should be no cause for surprise, except for those who think the future is like the past but only better.

And it is unlikely that there will be much resistance in China, at least not initially. The Chinese state and its increasingly globalist business class are committed to the goal of making their country number one both economically and politically. This goal cannot be reached without access to new sources of raw resources, most of which are in sub-Saharan Africa. Consequently, any moves to staunch immigration from that continent will necessarily be postponed, watered down, or done as surreptitiously as possible. Surreptitious measures, however, cease to be effective once an immigrant community reaches a certain size, since illegal immigrants will simply hide among the large numbers of legally established residents.

Does this mean that population replacement will proceed unopposed in China? No, it doesnât. But such opposition will not come from the Chinese state. Nor will it be framed in terms of traditional Chinese nationalism. It will probably come from anti-globalist groups or individuals and be framed in terms of a neoracialist ideology whose origins, ironically, will be non-Chinese and probably American.

Bodomo, A. (2009) The African Trading Community in Guangzhou (??): An Emerging Bridge for Africa-China Relations, accepted (October 2009) for publication in China Quarterly.
http://www.hku.hk/linguist/staff/ChinaQuarterlySubmission2009ResearchPaper.doc