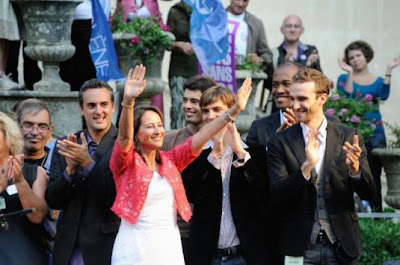 A University of New Mexico research team has announced that the human gene pool seems to have admixture from an outside source, most likely from the Neanderthals and other archaic humans. This conclusion was based on analysis of variation in microsatellite DNA from European, Asian, and Oceanic populations. Since microsatellite DNA is thought to be of neutral selective value, any variation must be due to the slow gradual accumulation of new mutations or admixture from outside our gene pool.

Using projected rates of genetic mutation and data from the fossil record, the researchers suggest that the interbreeding happened about 60,000 years ago in the eastern Mediterranean and, more recently, about 45,000 years ago in eastern Asia. (Dalton, 2010)

This analysis suffers from several problems. For one thing, it is based on rough estimates, i.e., the length of time that modern humans have existed outside Africa and the speed at which new mutations accumulate in microsatellite DNA. There is also the dubious assumption that this DNA is never affected by natural selection.

Nonetheless, this announcement has delighted anthropologists like John Hawks, Greg Cochran, and Alan Templeton who have long argued against the âOut of Africaâ model of human origins. As multiregionalists, they used to argue that modern humans evolved out of earlier archaic populations in Africa, Europe, and Asia. Thus, modern Europeans would primarily be descended from Neanderthals, Modern Asians from Peking man, and so on.

Today, the multiregional model is no longer accepted, and its proponents are now backing a compromise. Modern Europeans, for instance, would largely descend from the wave of humans that spread out of Africa 60,000 to 40,000 years ago, but they would still have some admixture from Neanderthals in their gene pool.

Will this debate ever be settled? Yes, and very soon. Thatâs the good news. In a few months, the reconstruction of the Neanderthal genome will be published. By comparing it with the genome of modern Europeans, we should find out whether any genes flowed from one to the other. Preliminary comparisons have already been done and to date have found â¦ nothing.

Now the bad news. The triumph of the âOut of Africaâ model will be heavily politicized. Although I support this model, I feel nothing but shame for the cheap shots that many other adherents have made. A common one has been to cast multiregionalists as âracists.â

This name-calling appears in a New York Times article that presents multiregionalists as âinheritors of a culturally infected biologyâ and its opponents as âsupporting our better inclinations.â In an interview, paleontologist Chris Stringer clearly enjoyed being on the side of the angels, while snidely accusing the other side of racism. He recalled an encounter with Carleton Coon in a Harvard washroom where the aged professor referred to one of his critics as ”that . . . Jew Weiner.”

What irks me about this anecdote is not that it is unverifiable (washroom conversations are not published and Coon has long been dead), but simply its irrelevance. Suppose it could be shown that Carleton Coon had regularly sodomized his grad students. Or would microwave live kittens. Or had bad breath. What would that prove or disprove about the multiregional model? Nothing. This is ad hominem at its sleaziest.

In the same interview, Stringer went on to say that our species is so young that differences among humans can only be skin-deep:

Since so little time has passed since they [modern humans] decamped from Africa, dispersing to the far regions of the world — 100,000 years being a mere paleontological moment — ”only slight differences, if any, in intellect and innate behavior are likely to have evolved between modern human populations.” We are ”all Africans under our skin.”

Uh, 100,000 years is not a mere paleontological moment. A population can undergo significant physical and genetic change in as little as eight generations. In fact, many animal species go back only to the last ice age (25,000-10,000 BP). Evolutionary change is due primarily to the intensity of natural selection and only secondarily to the passage of time. Indeed, the faster such change has occurred, the more important it must be, since it is being driven by intense natural selection and not by adaptively neutral processes like genetic drift or founder effects.

I can forgive journalists for not knowing the above. I find it harder to forgive Chris Stringer, who is fully aware of how fast natural selection can operate. There is no point in winning a debate if you inflict a lot of collateral damage in the process.

Clearly, there has been collateral damage. The catch phrase âWe are all Africansâ has taken on a life of its own, with almost 100,000 Google hits. In the last French election, SÃ©golÃ¨ne Royal cited the latest findings in paleontology when she proclaimed, âNous sommes tous des Africains!â This cute expression is even appearing in high school textbooks.

And weâll probably see it in newspaper headlines when the Neanderthal genome is finally published.

← The Puzzle of European Hair and Eye ColorAsk the Rhino →
Current Commenter
says:
Current Date at Time Now
Leave a Reply - Comments on articles more than two weeks old will be judged much more strictly on quality and tone
Cancel Reply
Commenting Disabled While in Translation Mode