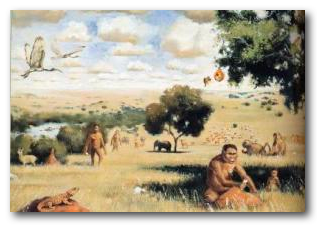 The Environment of Evolutionary Adaptedness, over a million years ago in the Pleistocene. A founding myth of evolutionary psychology.

In the future, how will we look at evolution and human behavior? Perhaps weâll still be looking through the lens of evolutionary psychology, albeit a more âevolvedâ one than the current variety. Or perhaps there will be a new paradigm.

One thing is sure. Evolutionary psychology, as now defined, is untenable. It suffers from several flawed assumptions:

– Human nature is uniform, except for gender differences. It came into existence over a million years ago during the Pleistocene, in the Environment of Evolutionary Adaptedness (EEA). This was long before modern humans began to spread out of Africa some 40,000 years ago and eventually form the populations we know today.

– Given the complexity of human behavior, its genetic basis could not have changed to any appreciable extent since the Pleistocene.

– All present-day humans are therefore essentially the same. All differences in behavior, personality, and temperament must result from a single human nature responding to different environmental inputs.

These assumptions are false. Human genetic evolution has actually accelerated over the past 40,000 years, and even more so over the past 10,000. The latter period, in particular, was not one of people adapting to new physical environments defined by climate, landscape, and vegetation. People were adapting to new cultural environments defined by social structure, normative behavior, and technology.

Yes, human behavior is complex, and any genetic influences must be correspondingly complex. But these influences can be radically changed by a few point mutations. Thereâs no need to start from scratch, as John Tooby and Leda Cosmides imply. There may simply be changes to developmental timing, such as an infantâs mental plasticity being extended into older life stages. Or there may be changes to the degree of masculinization or feminization. The possibilities are endless. Again, there is no need to posit a huge number of genetic changes.

Yes, we are adapted to past environmentsâand not to the present one. And there is often a mismatch between something that made sense in the past and our present reality. But why assume a time gap of over one million years? Is it because the Pleistocene makes an ideal setting for just-so stories?

I suspect there is another, more cynical reason. By placing the evolutionary origins of human nature in the distant past, one avoids the messy reality of differences among current human populationsâdifferences in outlook, personality, time orientation, and behavioral predisposition. The Pleistocene EEA may be a just-so story about the past, but it has also had a real impact on the present. It was part of the deal that made evolutionary psychology possible, in the wake of the firestorm that consumed sociobiology.

A paradigm can evolve. Medicine was a pseudo-science that killed more patients than it cured as late as the 1920s. In the space of a few decades, the situation completely reversed. There have been similar turnarounds in other fields. Alchemy became chemistry, and astrology became astronomy.

Indeed, there have been calls for a rethinking of evolutionary psychology, even from Tooby and Cosmides. âAlthough the hominid line is thought to have originated on edges of the African savannahs, the EEA is not a particular place or timeâ (Tooby and Cosmides, 2005, p. 22). It is a composite of whichever selection pressures brought each adaptation into existence. There are thus potentially as many EEAs as there are adaptations, and some may be later than others.

This year, several evolutionary psychologists authored what may be called a manifesto for change:

We argue that the key tenets of the established EP paradigm require modification in the light of recent findings from a number of disciplines, including human genetics, evolutionary biology, cognitive neuroscience, developmental psychology, and paleoecology. For instance, many human genes have been subject to recent selective sweeps; humans play an active, constructive role in co-directing their own development and evolution; and experimental evidence often favours a general process, rather than a modular account, of cognition. (Bolhuis et al., 2011)

The text parallels my recent paper in Futures, sometimes strikingly so. It starts off by observing that in the early years of evolutionary psychology âour knowledge of the human genome was limited and gradualism dominated evolutionary thinking.â Today, we know differently:

Events in the Holocene (the last 10,000 years), particularly the adoption of agriculture, domestication of animals, and the increases in human densities that these practices afforded, were a major source of selection on our species, and possibly accelerated human evolution. Evidence from the human genome strongly suggests that recent human evolution has been affected by responses to features of the environment that were constructed by humans, from culturally facilitated changes in diet, to aspects of modern living that inadvertently promoted the spread of diseases. (Bolhuis et al., 2011)

Even when assessed on its own terms, the Pleistocene EEA looks more and more like a myth, and should be treated as such:

[â¦] the abstract concept of stable selection pressures in the EEA is challenged by recent evidence from paleoecology and paleoanthropology. The Pleistocene was apparently far from stable, not only being variable, but progressively changing in the pattern of variation. The world experienced by members of the genus Homo in the early Pleistocene was very different from that experienced in the late Pleistocene, and even early anatomical modern Homo sapiens that lived around 150,000 years ago led very different lives from Upper Paleolithic people (40,000 years ago) (Bolhuis et al., 2011)

Is a paradigm shift in the offing? Probably. But what form will it take? Perhaps the second question is unimportant. Whether evolutionary psychology changes or disappears, weâll be looking at evolution and human behavior in a very different light.