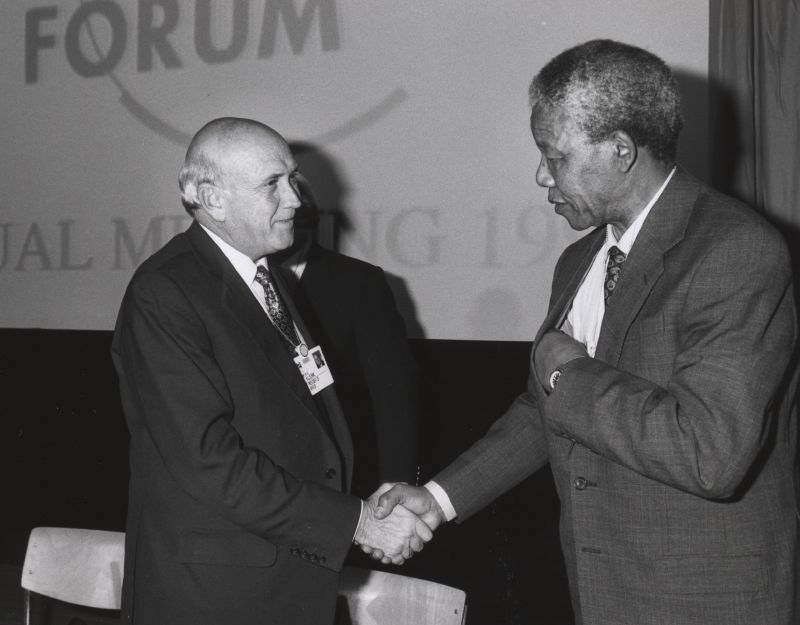 Nelson Mandela shakes hands with Frederik de Klerk, 1992. Antiracist iconography is focused on past struggles, like the fight against apartheid. Yet the world is now a very different place (source).

After five centuries of growth, the European world is contracting, and this contraction is visible not only overseasâin Johannesburg, Sydney, and New Yorkâbut also in Europe itselfâin London, Paris, and Oslo. Yet this new reality is scarcely visible in antiracist iconography, which is set in the heroic age of past struggles. For some, the high point was the anti-apartheid struggle of the 1980s. For others, it was the civil rights era of the early 1960s. For others still, it was the last world war.

When a French magazine interviewed Pierre-AndrÃ© Taguieff about his newly published dictionary of racism, the interview was accompanied by photos of the usual suspects, including one from apartheid South Africa. Yet that country has been under black rule for almost two decades now. Yes, itâs been that long already.

This is one point that Pierre-AndrÃ© has been raising. The world is now a changed place, yet antiracism has failed to adapt. Worse still, antiracists fail to see the perverse effects of this failure to adapt. The solution, however, is not to abandon antiracism, but to reform it. For Pierre-AndrÃ©, antiracists need to rediscover their libertarian roots. At one time, they were âon the side of anti-conformism, of spiritual rebellion. The Dreyfusard intellectuals fought with the arms of intellect, in the name of universal values (Justice, Truth), against official prejudices and dominant ideasâ (Taguieff, 2013, p. 66).

In addition, Pierre-AndrÃ© argues that antiracists should do more to condemn racism against Whites.

But âanti-White racismâ has never really been recognized and condemned by organized antiracist activists as a full-fledged form of racism. Its importance continues to be minimized, and its dangerousness underestimated. The most common attitude is not to deny the existence of so-called âanti-White racismâ but to consider it negligible. Professional antiracistsâthe heads and staff of antiracist associationsâwish to preserve their monopoly over the definition of âracismâ and the designation of âracists.â (Taguieff, 2013a)

This attitude, bordering on denial, is not wholly unjustified. First, letâs suppose that the antiracist movement does recognize the existence of anti-White racism. Overnight, its purpose would shift from primarily one of changing the behavior of Whites to primarily one of changing the behavior of non-Whites, especially people of African or Muslim origin. For those are the people who perpetuate most acts of interracial violence. Could most antiracists handle such an about-face?

Second, interracial violence against Whites seem less racially motivated than interracial violence against non-Whites. To a large degree, it is a side effect of the higher rate of interpersonal violence within certain non-White communities. If we look at the United States, the high rate of Black-on-White violence is largely explained by the similarly high rate of Black-on-Black violence. Undoubtedly, there are cases where Whites are victimized specifically because of their racial background. Even there, however, the reason has more to do with Whites being an easy target. âWhites donât fight back.â

This was a lesson I once learned â¦ the hard way. When my family moved to a town of largely Scots-Irish heritage, I had to deal with a more aggressive environment at school. For a while I felt like the other boys were singling me out. Actually, their violence was just following the path of least resistance. Things got easier when I learned to fight back, although âfighting backâ wasnât just self-defense. It was also preemptive violence. And collective violence. It could also mean provoking a fight when the odds were in your favor, as opposed to letting the other guy choose the moment when the odds were in his favor.

That kind of violence will not be remedied by antiracist education. Imagine a âyouthâ who wants to beat someone upâeither for an initiation or just for the fun of it. He settles on an easy target, a person who wonât fight back, a White. How can antiracist education stop him from acting out his thoughts? By teaching him that White passivity is a baseless stereotype? By making him feel guilty? By appealing to his sense of justice?

Such a strategy works with a population that considers violence unacceptable, unless permitted by some higher authority and sanctioned as âjust.â In Western Europe, however, that kind of population isnât the one thatâs committing the interracial violence.

The problem here is the lack of a common rulebook. Although many âNew Europeansâ see violence as a legitimate way to settle a personal dispute, their countries of origin are often surprisingly peaceful. The reason is that any act of violence will trigger retaliation by the victimâs brothers and male relatives, and this retaliation will be visited not only on the perpetrator but also on his own family and relatives. The result is a âbalance of terrorâ that ensures some degree of social peace.

The situation changes, however, when the same people move to a society that imposes nothing worse than a prison sentence on violent criminals and no punishment at all on their families. The result? In France, between 60 and 70% of prison inmates are Muslims, mostly from North or West Africa, although they make up only 12% of the total population (Moore, 2008). In Spain, they account for 70% of prison inmates but only 2.3% of the total population (WikiIslam, 2013). In Belgium, they make up 45% of prison inmates (Sudinfo.be, 2013). In all three cases, âMuslimâ is a rough proxy for âpeople from clan-based societies that have been weakly pacified by a higher authority.â This proxy has the disadvantage of excluding some groups that shouldnât be excluded (Christians and animists from parts of Africa). It also applies more to some Muslim groups (e.g., Somalis, Afghans) than to others (e.g., Egyptians).

It is difficult to discuss the above prison data in polite society. One has the impression of breaking a taboo, of saying something reprehensible. In polite society, violence is a last resort and done only under duress. Surely, those facts are exaggerated, if not fraudulent.

Yet the prison data actually understate the problem. Most acts of immigrant violence go unreported, and when reported they often go unpunished. The most flagrant examples are provided by the recent riots in London, MalmÃ¶, and the suburbs of many French cities:

Despite the scale of the damage, French police have hesitated to make any arrests for fear of sparking more riots. Residents of the neighborhood know the names of the perpetrators but “nobody dares to speak for fear of reprisals.” “You can no longer order a pizza or get a doctor to come to the house.” (Kern, 2012)

The riots nonetheless account for only a small part of the underreporting and underpunishment. In England, France, the Netherlands, Norway, and Sweden, there are now many âno-go areasâ or zones de sÃ©curitÃ© prioritaires where the police go intermittently or not at all.

Pierre-AndrÃ© is to be commended for criticizing the double standard that governs discussion of interracial violence. Nonetheless, this double standard is not wholly unwarranted. When Whites are the victims, the motives are less apparent, often being only a perception that Whites are easy targets. Even when the motives are clearly racial, if not racist, itâs unclear how they can be eliminated. Antiracist education would be of little use. Most of the educational material has been designed for Whites, with a view to making them feel guilty about the injustices they and their ancestors have done to non-Whites. If the target audience is now Muslim and African, we might get the reverse of what we want. We could actually end up inciting race hatred.

Yes, more balanced educational material could be produced, but how effective would it be anyway? Would appeals to feelings of guilt have the same effect on people who make less use of guilt in their own cultures to restrain wrong behavior? And who furthermore tend to define âwrong behaviorâ in non-universalistic terms, i.e., as whatever is bad for their own group? In any case, wouldnât the target audience perceive such education as just âenemyâ propaganda? Keep in mind that a low-grade insurrection is already brewing in many Afro-Muslim communities of Western Europe.

So what will be done? I suspect antiracists will acknowledge the existence of anti-White racism and take some steps to fight it, if only to remain credible. Weâll then see frantic searches for the masterminds behind such violence (Islamists? Cultural Marxists?). By and large, this âreformed antiracismâ will come to nothing.

The situation is eerily similar to that of Eastern Europe in the 1980s. Minor reforms produced disappointing results and tended to make other problems worse. Major reforms were not attempted because they might get out of hand â¦ as they eventually did. So a consensus developed to muddle on, in the hope that things would sort themselves out â¦ which they didnât.

White Racialism in America, Then and Now
An Intellectual History of the Last One Hundred Years
Ron Unz
• 1,066 Comments • Reply
← More Thoughts. the Evolution of a WordJust for Show? →
Hide 38 CommentsLeave a Comment
"Can Antiracism Reform Itself?"
• 38 Comments
Commenters to Ignore
Commenters to ignore (one per line)

← More Thoughts. the Evolution of a WordJust for Show? →
Current Commenter
says:
Current Date at Time Now
Leave a Reply - Comments on articles more than two weeks old will be judged much more strictly on quality and tone
Cancel Reply
Commenting Disabled While in Translation Mode