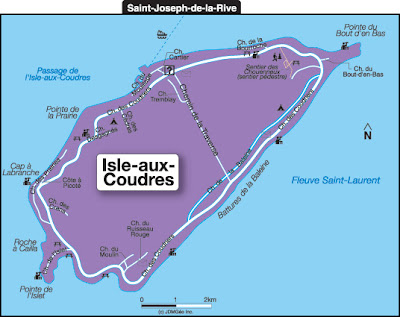 Ãle aux Coudres, a French Canadian community on an island in the St. Lawrence

Human biodiversity is slowly making headway in academia. It has three defining principles:

1. Evolution did not end, or even slow down, with the advent of Homo sapiens. It has actually accelerated.

2. It especially accelerated about 10,000 years ago, when the rate of genetic change rose over a hundred-fold among early modern humans. This acceleration didnât happen because they were spreading into new physical environments with different climates, topographies, vegetation, and wildlife. By then, humans had already spread throughout the world from the equator to the arctic. They were now spreading into new cultural environments with different technologies, social structures, belief systems, and means of subsistence.

3. The human species has therefore experienced more genetic change over the past 10,000 years than over the previous million years. This change has particularly involved genes for mental, behavioral, and life-history traits (Frost, 2011; Hawks et al., 2007).

One life-history trait is the age of first reproduction (AFR). Because AFR is highly heritable, there may have been co-evolution between biology and culture. In other words, natural selection has tended to bring full reproductive maturity into line with the age when young couples have enough resources to marry and start a family.

When Europeans first began to settle North America, they came from a land-poor environment where young people had to postpone marriage and family formation. Typically, they had to wait until their parents handed over the farm in whole or in part. This tendency toward late marriage was widespread throughout Western Europe, so much so that it has been dubbed the âWestern European Marriage Patternâ:

[â¦] the late and non-universal marriage pattern was definitely prevalent across Northwestern Europe in the seventeenth century. By 1650, when village reconstitution studies become sufficiently numerous to render the generality of the pattern indubitable, the average age of women at first marriage was twenty-four or over, 7 to 20 per cent of women never married, and the incidence of childbirth out of wedlock was below 3 per cent. This marital pattern restricted fertility massively. A very considerable minority of women remained single and bore no children; those who married bore none for the first ten years of their fecund life-phase, on average. If they had their last child at the age of forty, their entire reproductive careers would span roughly fifteen years, a long time by modern standards but remarkably brief in a pre-transition context. Resulting fertility was less than half the rate that would have been achieved if all women between fifteen and fifty were married. (Seccombe, 1992, p. 184)

All of this changed when Europeans began to settle in the âNew World.â Suddenly, land was no longer a constraint on marriage, and early marriage became the norm. With the downward shift in the age of marriage, was there a corresponding downward shift, via natural selection, in the age of full reproductive maturity?

Yes, according to a recent study of Ãle aux Coudres, a French Canadian community on an island in the St. Lawrence. Over a period of 140 years, from 1800 to 1940, this community saw its mean AFR fall by four years. This decline was driven not by a lowering of the mean age of marriage (which now remained stable) but by a shortening of the mean interval between marriage and first birth.

The decline in AFR seems to have been real, and not an artefact of incomplete marriage and birth records. In fact, the church registers provide exceptionally detailed birth and marriage data. Nor was it an artefact of an influx of people with lower AFRs. Almost everyone on Ãle aux Coudres is descended from thirty families who settled the island between 1720 and 1773.

Could the reason have been changes to diet and nutrition? Unlikely.

The advancement of age at maturity, as well as increases in fertility, may reflect plastic responses to improvements in nutritional conditions, such as those observed during the 19th and 20th centuries in Western societies. Better-fed women grow faster, mature earlier and in a better physiological state, and are more fecund. Importantly, alongside such plastic responses in reproductive traits, we would expect an increase in infant and juvenile survival rates with time. Despite some fluctuations, infant and juvenile survival rates on Ã®le aux Coudres were not higher at the end of the study period than at the beginning. (Milot et al., 2011)

When I first heard of this study, I thought that some kind of cultural lag might have been responsible. Old habits die hard. Perhaps many of the early settlers, with memories of the old country, were still afraid of not having enough land to support a family, even after they had decided to marry. This reticence would have then gradually disappeared as memories of the old country disappeared.

Such a change in mentality, however, would have happened much more among the earlier generations than among the later ones. Yet this is not what we see in the data. AFR changed at the same rate from one generation to the next throughout the 140-year period. Couples married after 1870 showed the same rate of change as couples married before 1870. Indeed, this steady rate of change seems to rule out most socio-cultural explanations, particularly those that involve some kind of re-adjustment to new conditions. In any case, the study period (1800 to 1940) postdates the years of immigration and settlement (1720 to 1773).

Weâre certainly going to see more studies like this one, either from Ãle aux Coudres or from other regions of French Canada. In general, French Canadian communities are ideal for the study of human microevolution. Records of births, marriages, and deaths are remarkably complete over a span of three centuries, and the inhabitants tended to stay put in the same locality generation after generation. For several regions of Quebec, we already have complete genealogical databases that could be enriched with genetic data for the most recent generations.

The Lack of Progress in Science: Sex Differences
Razib Khan
• 98 Comments
← End of an EraApples, Oranges, and Genes →
Hide 14 CommentsLeave a Comment
"Bringing Reproductive Maturity Into Line with the Age of Marriage"
• 14 Comments
Commenters to Ignore
Commenters to ignore (one per line)

← End of an EraApples, Oranges, and Genes →
Current Commenter
says:
Current Date at Time Now
Leave a Reply - Comments on articles more than two weeks old will be judged much more strictly on quality and tone
Cancel Reply
Commenting Disabled While in Translation Mode