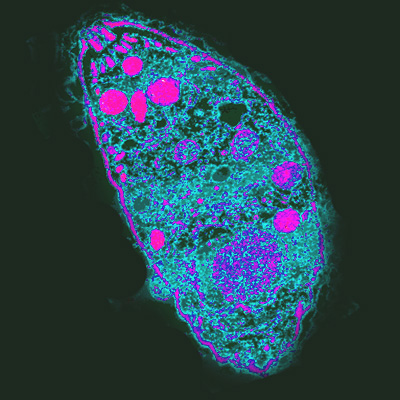 Itâs long been known that many organisms are parasites, i.e., they survive by living off a host. In recent years weâve learned that some of them can improve on their life strategy by manipulating their hostâs behavior. A fungus, Ophiocordyceps unilateralis, will invade an antâs brain and direct its host to go to the right height above ground, lock itself into position â¦ and die (Ophiocordycepsunilateralis, 2013). A tapeworm, Schistocephalus solidus, will infect a fish and cause its host to turn white and prefer the water surface, thereby making it an easy prey for a passing birdâthe next stage in the wormâs life cycle (Fish diseases and parasites, 2013). A protozoan, Toxoplasma gondii, after being excreted in cat feces and then picked up by a mouse, will infiltrate the brain of its new host and neutralize the fear response to the smell of cat urine. The host thus becomes a way to get back into a catâs gutâthe only place where this protozoan can sexually reproduce (Ingram et al., 2013).

Ants, fish, mice â¦ The sequence is troubling. What about us? Have some microbes evolved to manipulate our brains? Perhaps, but it would be hard to prove. For one thing, weâre continually being infected by seemingly benign microbes that trigger no symptoms of infection, i.e., fever, pus formation, immune response, etc. They go about their business without our knowing theyâre inside us.

For another thing, a microbe can permanently alter our mental wiring and then be removed from our body. The culprit vanishes from the scene of the crime and leaves only a few ambiguous clues. This is the conclusion of a recent study on Toxoplasma gondii. When mice were infected with a weakened strain of this protozoan, they were able to overcome the infection and clear all traces of it from their brains. Yet the behavioral change remained:

It seems that T. gondii moves around the hostâs brain and alters many neurons without actually taking up residence in them, apparently by injecting specific proteins through the cell wall.

Although weâre not a natural host, T. gondii does appear to alter human behavior:

Toxoplasma-infected subjects differ from uninfected controls in the personality profile estimated with two versions of Cattellâs 16PF, Cloningerâs TCI and Big Five questionnaires. Most of these differences increase with the length of time since the onset of infection, suggesting that Toxoplasma influences human personality rather than human personality influencing the probability of infection. Toxoplasmosis increases the reaction time of infected subjects, which can explain the increased probability of traffic accidents in infected subjects reported in three retrospective and one very large prospective case-control study. [â¦]
Toxoplasma-infected male students are about 3 cm taller than Toxoplasma-free subjects and their faces are rated by women as more masculine and dominant. These differences may be caused by an increased concentration of testosterone. Toxoplasma also appears to be involved in the initiation of more severe forms of schizophrenia. At least 40 studies confirmed an increased prevalence of toxoplasmosis among schizophrenic patients. Toxoplasma-infected schizophrenic patients differ from Toxoplasma-free schizophrenic patients by brain anatomy and by a higher intensity of the positive symptoms of the disease. (Flegr, 2013)
T. gondii is being studied for possible behavioral effects mainly because it has attracted so much attention. But weâre probably being manipulated by other parasites. âA large number of parasitic organisms probably exist in helminths, protozoa, fungi, bacteria, archea and viruses that may influence the phenotype of their human host even more than the Toxoplasma. These organisms are, however, still waiting for research teams to engage in a systematic study of their influence on the human hostâ (Flegr, 2013).

Where to look? Cherchez la femme. Sexually transmitted diseases have much to gain from altering host behavior. I would especially look at bacterial vaginosis, chlamydia, and vaginal yeast.

Flegr, J. (2013). Influence of latent Toxoplasma infection on human personality, physiology and morphology: pros and cons of the Toxoplasmaâhuman model in studying the manipulation hypothesis, The Journal of Experimental Biology, 216, 127-133. http://jeb.biologists.org/content/216/1/127.full