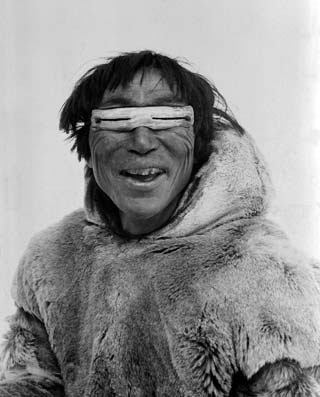 An Inuk wearing snow goggles. Is ambient light at its lowest in Inuit territory?

The logjam seems to have broken. On the heels of Lewis et al. (2011), we now have another paper on variation in brain size among human populations, this time by Pearce and Dunbar (2011).

Brains vary in size by latitude, being bigger at higher latitudes and smaller at lower ones. This variation seems to reflect an adaptation to climate. But just how, exactly, does climate relate to brain size? How direct or indirect is the relationship?

Pearce and Dunbar (2011) argue that bigger brains are an adaptation to lower levels of ambient light. Specifically, dimmer light requires larger eyes, which in turn require larger visual cortices in the brain. Using 73 adult crania from populations located at different latitudes, the two authors found that both eyeball size and brain size correlate positively with latitude. The correlation was stronger with eyeball size, an indication that this factor was driving the increase in brain size.

How credible is this explanation? First of all, visual cortex size was not directly measured. The authors inferred that this brain area was responsible for the increase in total cranial capacity. Obviously, they couldnât have done otherwise. They were measuring skulls, not intact brains.

But thereâs another problemâone in the realm of logic. A lot of things correlate with latitude: pigmentation, mating systems, rules of descent, degree of paternal investment, and so on. If one of them correlates more strongly with latitude than the others, does it therefore cause the others? Not at all. It may be closer than the others to this shared cause, but it doesnât necessarily lie on the same causal chain as the others.

In other words, the level of ambient light does not produce a single cascade of consequences, with eyeball size being the first consequence. There are probably many different cascades.

To date, the best map of human variation in brain size is the one by Beals et al. (1984) (see previous post). If dimness of light is the main determinant, brain size should be highest in northwestern Europe, northern British Columbia, the Alaskan panhandle, and western Greenland. These regions combine high latitudes with generally overcast skies. Yet they are not the regions where humans have the biggest brains. Instead, brain size is at its highest among humans from the northern fringe of Arctic Asia and from northeastern Arctic Canada. These regions are, if anything, less overcast than average. They often have high levels of ambient light because of reflection from snow and ice.

The jury is still out on this question. I suspect, however, that the following three factors probably explain variation in brain size with latitude.

1. Among hunter-gatherers, hunting distance increases with latitude because there are fewer game animals per square kilometer (Hoffecker, 2002, pp. 8-9). Hunters must therefore store larger amounts of spatiotemporal information (landmarks, previous hunting itineraries, mental simulations of possible movements by game animals over space and time). This factor might explain why brains have grown smaller since the advent of agriculture.

2. The seasonal cycle matters more at higher latitudes. As a result, northern hunter-gatherers, and northern agriculturalists even more so, must plan ahead for the next season (or even for the season after the next one).

3. Women gather less food at higher latitudes and almost none in the Arctic. They are thus free to specialize in other tasks, such as garment making, food processing, and shelter building. This âfamily workshopâ creates opportunities for greater technological complexity, which in turn increases selection for greater cognitive performance.

I suspect bigger brains provide not so much greater intelligence as greater ability to store information. As such, they nonetheless pre-adapted northern hunter-gatherers for later advances in cultural evolution.

Intelligence and General Knowledge: Your Starter for 10 Â
James Thompson
• 70 Comments • Reply
← Human Nature or Human Natures?Evolution and Human Behavior: Towards a... →
Hide 23 CommentsLeave a Comment
"Brain Size, Latitude, and Ambient Light"
• 23 Comments
Commenters to Ignore
Commenters to ignore (one per line)

← Human Nature or Human Natures?Evolution and Human Behavior: Towards a... →
Current Commenter
says:
Current Date at Time Now
Leave a Reply - Comments on articles more than two weeks old will be judged much more strictly on quality and tone
Cancel Reply
Commenting Disabled While in Translation Mode