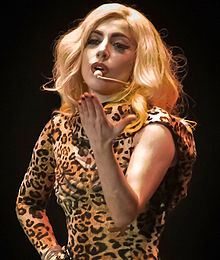 Lady Gaga on the Monster Ball Tour, 2010
Note: Post has been updated with new data from Jason Malloy

âWhy not? It will leave more women for the rest of us.â I remember hearing that argument for gay rights while in high school, the assumption being that gays greatly outnumbered lesbians. There was some exaggeration in both directions. Gays have never made up 10% of all males and lesbians have never made up only 1% of all females.

Even so, the former seemed to outnumber the latter. Back then.

Today, the tables have turned. If we look at General Social Survey data (2010) from the United States (analysis by Jason Malloy), the proportion of gay or bisexual men has held steady at 5 to 6%, although there seems to have been a decline among men born since 1980. Meanwhile, the proportion of lesbian or bisexual women has risen from a low of 4% in the oldest cohort to a high of 9% in the youngest one.

Percentages of men who have had a male sex partner, by birth cohort:

For a better look at what’s been going on among males born since 1980 (who are still young adults), the last two cohorts are compared only for the 18-23 age bracket:

Percentages of women who have had a female sex partner, by birth cohort:

This upward trend seems to be continuing among the youngest females (18 to 23 year-olds only):

What is going on? It looks like male homosexuality is much more hardwired than female homosexuality. As our social environment becomes more liberal, fewer gays are coming out of the closetâprobably because so few are left there. In contrast, the number of potential lesbians seems much more open-ended. Is there an upper limit?

The Lack of Progress in Science: Sex Differences
Razib Khan
• 98 Comments
← Greece at the CrossroadsAre Male and Female Homosexuality Inver... →
Hide 110 CommentsLeave a Comment
"Born This Way?"
• 110 Comments
Commenters to Ignore
Commenters to ignore (one per line)

← Greece at the CrossroadsAre Male and Female Homosexuality Inver... →
Current Commenter
says:
Current Date at Time Now
Leave a Reply - Comments on articles more than two weeks old will be judged much more strictly on quality and tone
Cancel Reply
Commenting Disabled While in Translation Mode