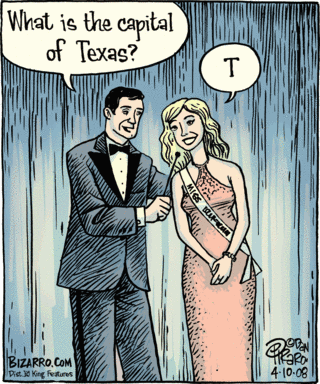 The stereotype is not hard to summarize. When a blonde isnât dumb, sheâs lascivious. This is no laughing matter. In fact, a lot of people seem to believe it according to a British survey:

Blondes may have more fun – but it comes at a price. Men don’t trust them. A study found that while fair-haired women are considered to be the most adventurous in bed, brunettes are seen as more reliable in a relationship … and more sexy. In a poll of 1,500 men, more than 60 per cent thought dark-haired girls were the most trustworthy and loyal, compared with just 14 per cent of blondes. The result is men feel brunettes make the best wives.

[â¦] Commenting on the study for Philips Sensual Massagers, spokesman Karen Moore said: ‘Blondes have always had a reputation for being fun, carefree and adventurous and it seems that can also be applied to relationships, as men think they have the best skills when it comes to the bedroom.’ (Daily Mail, 2010)

Actually, blondes have not always had this reputation. A very different one emerges from a study of Victorian-era novels:

In each a blonde maiden opposes a brunette, and in each the blonde is preferred. When the ending is happy, the blonde marries the hero; while the brunette is deserted. Most significantly, the blondeness and the darkness are continually emphasized by the authors until their symbolic intention becomes unmistakable. And this symbolic intention is always the same. The maiden with blue eyes and blonde hair is invariably âinnocent,â âgood,â and âpureâ; while the dark lady is âimpetuous,â âardent,â and âpassionate.â (Carpenter, 1936, p. 254)

This other study concludes: âIn the mid-nineteenth century golden hair became an attribute of the pure and innocent maiden; while dark hair suggested the woman of passion and experience.â

Some hair-color preferences are undoubtedly innate, e.g., rare-color preference (Frost, 2006). Most, however, seem to be culturally constructed. They are specific to a time and place. They are also specific to the social dynamic that links the observer to the observed. If this dynamic is ignored, one might conclude that light-haired women are indeed sexually freer than dark-haired women, all other things being equal. But all other things were not equal when this stereotype took shape. Light hair and dark hair were proxies for ethnicity.

The current blonde stereotype began in the U.S. of the early 20th century. It was a product of ethnic contact between the native-born population and darker-haired immigrants (Italians, Jews, Greeks, etc.) who were often shocked by the relative sexual freedom of âAmericanâ women. This attitude existed in different communities, but it entered the mainstream culture primarily via Jewish immigrants and specifically through their contributions to art and literature. It is a common theme in Jewish-American novels:

The exotic female in Jewish life is the sexy shiksa, frequently a blue-eyed blonde who offers gratifications withheld, at least until marriage, by proper Jewish girls. [â¦] A blend of arrogance and defensiveness prompts many Jews to claim that shiksas are more carnal and promiscuous than women of their own faith because Christians are less intelligent, refined, and clean than themselves. Goyishe Kopf (literally translated as gentile head), the Yiddish colloquialism for stupidity, exemplifies the traditional contempt for Christians. (Jaher, 1983)

This theme entered popular American culture through fiction, motion pictures, and comedy routines, with well-known examples including the novel Portnoyâs Complaint by Philip Roth and the typecasting of Marilyn Munroe in vamp roles (Jaher, 1983).

The âdumb blondeâ stereotype gradually spread outside the U.S. As a rural Ontario teenager in the 1970s I heard this term on American sitcoms, but it had no connection to my reality. Nor were the blondes at my school thought to be sexually permissive. In the late 1980s, as a doctoral student in Quebec City, I remember the puzzlement that initially greeted blonde jokes, this humor having no relation to existing beliefs about hair color in French Canada. Today, blondes are routinely stereotyped throughout Canada as being sluttish and stupid, as if they have always been so.

This stereotype likewise came late to Europe. In the mid-1960s, Bastide (1967, p. 326) noted the following about the movie industry: âIn Europe, a blond is usually the heroine, and a brunette the dangerous woman. In Brazil, the dark woman is loving and faithful, while the blond is the vamp who leads a man to ruin.â

Several generations now separate Americans from the social dynamic that created the current blonde stereotype. This is less true in northwestern Europe, where recent decades have seen immigration from North Africa, the Middle East, and South Asia. For these immigrant communities, light-colored hair symbolizes European ethnicity and, by extension, relative equality of men and women, low importance of female virginity, permissive attitudes to pre-marital sex, etc. Such stereotyping has been reported from Sweden, as noted in the following news article:

Josephine’ was met with these words on the first school day at a high-school in an immigrant-dominated suburb south of Stockholm. Josephine was quite baffled, since aside from her hair color there was nothing about her appearance that would indicate she was promiscuous. She didn’t use makeup and had completely neutral clothing. It was exclusively her hair-color that branded her a ‘whore’.’

Josephine’ is one of the informants for researcher Maria BÃ¤ckman, who did an ethnographic field study in a suburb south of Stockholm, where ethnic Swedes make up about 20% of the population.

[â¦] In her study she focused on ethnic Swedish girls. They experience being linked to the notion of free, Swedish sexuality, which in the densely immigrant suburbs is not necessarily linked with something positive. The strategy for the suburb girls was therefore to play down their Swedish identity.

“Several dyed their hair. Not necessarily because they wanted to look like immigrants, but because they didn’t want to look so Swedish,” says BÃ¤ckman.
(Brandvold, 2010)

Stereotypes are not merely observations of reality. They also reflect the power relationship between the observer and the observed. Too often, the target is a group that cannot fight back. Albinos, for example, have increasingly appeared in films as hit men and other villains even though their poor eyesight makes such roles impossible in real life. From the 1960s to 2006, they appeared as âbad guysâ in sixty-eight films (Wikipedia, 2010). They suited the role perfectly, being easy to stigmatize and yet numerically too weak to retaliate.

Blondes have similarly faced media-driven stereotyping, and this stereotyping has persisted for similar reasons. It incurs few social penalties. Itâs like the little boy who gets beaten up just because heâs weaker than the bullies who gang up on him.