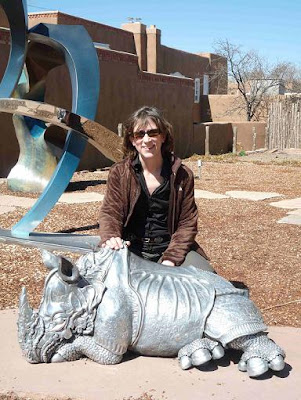 Linda Vigilant â Was she in on the Big Secret? Was the rhino?

The HBD blogosphere has been rife with speculation about the reconstruction of the Neanderthal genome. John Hawks, Razib Khan, and Steve Sailer felt that something big was in the offing. Above all, this something would resurrect the multiregional model of human origins.

Much of the stir centered on a recent study by Sarah Joyce that showed a higher-than-expected amount of variability in the microsatellite DNA of modern humans. Since this DNA is unaffected by natural selection, the unexplained variability must have come from an outside source, i.e., Neanderthals and other archaic humans.

Linda Vigilant, an anthropologist at the Planck Institute, found Joyce’s talk a convincing answer to “subtle deviations” noticed in genetic variation in the Pacific region.

Linda Vigilant works at the Planck Institute, where a team headed by Svante PÃ¤Ã¤bo is reconstructing the Neanderthal genome. Perhaps she was privy to something big that PÃ¤Ã¤bo had discovered but was waiting to disclose.

Now the hand-wringing is over. This morning, it’s been revealed that modern Europeans and Asians are 1-4% Neanderthal. Does this mean the multiregional model has been vindicated?

First, letâs be clear about what we mean by the multiregional model. Originally, it meant that Homo sapiens evolved out of earlier, more archaic humans at different times and at different places. Modern Europeans are thus primarily descended from Neanderthals, East Asians from Peking Man, and so on.

That version is now dead as a dodo. No one accepts it anymore. If we look at mtDNA or dental traits, the Neanderthals are no closer to modern Europeans than they are to modern Africans or modern East Asians (Krings et al., 1999; Ovchinnikov et al., 2000; Tyrrell & Chamberlain, 1998). In addition Joyceâs findings were not corroborated by Laval et al. (2010), who failed to find evidence of admixture in the noncoding DNA of modern Europeans and modern East Asians. The latest findings have backtracked a bit on this consensus, but not a lot.

So the current multiregional model is a weak version of the original. The idea now is that sporadic admixture brought potentially valuable Neanderthal alleles into our gene pool. Natural selection then caused the alleles to spread and multiply among modern humans. There could thus have been considerable Neanderthal introgression into our gene pool at certain loci, despite very low levels of admixture (Hawks & Cochran, 2006; Hawks et al., 2007). Laval et al. (2010) concede this point in their recent study:

However, it is important to emphasize that our inferences are based on non-coding neutral regions of the genome and that adaptive introgression from archaic to modern humans may have occurred to a greater extent. Indeed, in contrast to neutral alleles, adaptive variants may attain high frequencies by natural selection after minimal genetic introgression. Future studies comparing coding-sequence variation in modern humans and extinct hominids (e.g. Neanderthals) should help to answer this question. (Laval et al., 2010).

What do I think? This âminimal multiregionalismâ suffers from two arguments that seem to me weak:

1. Microbes do it. Why not humans?

Different strains of bacteria regularly swap genes, thus allowing new and better variants to leapfrog from one strain to another. Such âlateral gene transferâ is a powerful engine of evolutionary change because it spares different species the trouble of having to reinvent the wheel.

But what works in simple organisms or for simple traits does not necessarily work elsewhere. Yes, if the gene works more or less independently, you can plug it into another genome and get the same result, like the pigment gene that aphids have somehow taken from fungi. But this kind of âplug and playâ is harder to pull off with complex traits in complex organisms, like humans. A particular gene might work like fresh sliced bread in one species â¦ and like burnt toast in another.

But perhaps some adaptive solutions are still essentially the same in different complex organisms, like Neanderthals and modern humans. This point is made by Greg Cochran:

Selection often stalls out (in the medium term) because genetic variety has been exhausted, but an injection of archaic genes would have facilitated adaptive change. Moreover, some of those archaic alleles must have been useful ( i.e. had a fitness edge), since archaic humans in Eurasia had had a long time to adapt to their non-African ecology. (Khan, 2010)

Cochran and Hawks seem to be particularly interested in alleles relating to brain function, like the microcephalin allele that they had earlier attributed to gene transfer (Hawks & Cochran, 2006; Hawks et al., 2007). The Neanderthal microcephalin gene has since been reconstructed and â¦ it does not have that allele (Hawks, 2009).

Yet Cochran and Hawks remain undeterred. One reason why they donât see the weaknesses in their hypothesis is their unwillingness to spell it out in detail. Why wonât they? Well, ask the rhino.

As I understand it, their hypothesis is that Eurasian populations are relatively smart because their ancestors received special brain alleles from the Neanderthal gene pool. If Iâm right in my understanding, theyâre probably wrong in theirs. Modern humans adapted to temperate and arctic Eurasian environments in ways that were unique and unparalleled. Neanderthal brainpower had nothing to do with it. Although the Neanderthals apparently borrowed cultural and technological adaptations from modern humans, there is no evidence of any borrowing in the other direction. In fact, these archaic humans seem to have had very little to offer our ancestors:

Despite the apparent advances over their predecessors, Neanderthal technological complexity falls at the low end of the scale for recent hunter-gatherers. Both in terms of the number of types and component parts of individual implements, the complexity of Neanderthal tools and weapons is significantly lower than that of hunter-gatherers in northern latitudes (and more typical of modern groups in temperate or equatorial regions). Technological complexity in colder environments seems to reflect the need for greater foraging efficiency in settings where many resources are available only for limited periods of time. More specifically, the Neanderthals seem to have lacked untended facilities (e.g., traps and snares) and devices for food storage, which are common technological strategies for coping with resource fluctuations and high mobility requirements among hunter-gatherers in high latitudes. (Hoffecker, 2002, p. 135)

2. If Europeans were part-Neanderthal, theyâd have native rights

This is an interesting argument: âIf we Europeans are even a little bit Neanderthal, no one could deny our special claim to the European continent. People like Gordon Brown and SÃ©golÃ¨ne Royal would stop saying weâre no more indigenous than newly arrived immigrants.â

I have two responses. First, modern humans have inhabited Europe for some 35,000 years. If that length of residency doesnât confer native rights, then no one anywhere has anyâcertainly not the Amerindians or the Inuit, who have been in the Americas for less than 15,000 years.

Which brings me to my second point. The currently dominant ideologyâglobal capitalismâdenies the very notion of native rights. It doesnât matter whether your people have inhabited their land for 35,000 years or 35 million years. Thatâs just history, and weâve come to the End of History. From now on, weâre all just individuals interacting in a global marketplace.

Eventually, this ideology will fall victim to its own contradictions. A market economy can exist with minimal state supervision only in a relatively homogeneous âhigh trustâ society. Liquidate that social environment, and you liquidate the economic environment that comes with it. At âbestâ, youâll get a kind of totalitarian capitalism where everyone is deemed to be a potential thief or terrorist. At âworstâ, the system will collapse, as communism did in Eastern Europe.

Of course, we shouldnât wait passively for globalism to self-destruct. As thinking individuals with foresight, we should actively take part in the process. But such activism must start with an honest understanding of the world we live in. The lies of the current system cannot be fought with counter-lies. Europeans will not become more indigenous to their continent because they are found to have a few Neanderthal alleles here and there. Theyâre already indigenous, and thatâs that.

Well, maybe the rhino can tell us more.