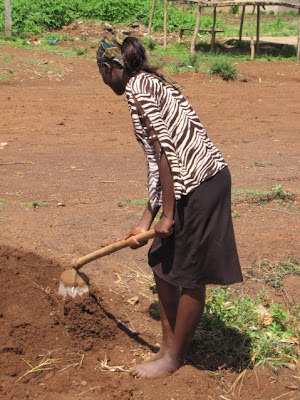 Guess who does the farmwork? In sub-Saharan Africa, women do most of the labor. On the other hand, they have more control over the fruits of their labor.

Are African women oppressed? For many, the answer is âyesâ:

Much popular writing and many popular ideas about gender in Africa continue to rest on the belief that women in all societies in the entire world are oppressed and that African women are particularly oppressed. Even in scholarly studies, the assumption of universal male dominance of African social and economic relations persists.(Saidi, 2010, p. 12)

Itâs true that women do most of the labor in sub-Saharan Africa. They are, in fact, largely self-reliant in providing for themselves and their children:

In sub-Saharan Africa, the labor of women was usually the work of daily subsistence. [â¦] Hunting and warfare, usually the activities of men, could in contrast produce either a big windfall or nothing at all in terms of male production. [â¦] Therefore, in a very simplistic way, it can be argued that female labor was the necessary laborâthe labor from which surplus could be derivedâwhereas male labor could produce the luxury items, the status items. (Saidi, 2010, p. 15)

This argument ignores, however, the greater power of African women over the fruits of their labor. Often, this power was totally in the hands of women, typically older matriarchs:

The labor of young women, and young men, for that matter, in many East-Central African societies, particularly among the Sabi-speaking group of peoples, was historically controlled by the older female matrilineal kin of the young women, not by men at all. (Saidi, 2010, p. 16)

Indeed, one could argue that African men tended to occupy a peripheral role within the family:

Poewe found in her fieldwork that the marriage institution was highly flexible and discouraged strong, intense, or lasting solidarity between husband and wife. The male in these matrilineal societies did not produce for his progeny or for himself, but usually for a matriclan with whom he might or might not reside. His role, as husband, was to sexually satisfy and impregnate his wife and to take care of her during her pregnancies, but under no circumstances should a man be the object of âexclusive emotional investment or focus of attention. Instead, women are socialized to invest their emotions and material wealth in their respective matrilineages.â (Saidi, 2010, p. 16).

This situation has changed since the colonial era, largely under the impact of Christianity and Islam. Efforts have been made to restructure the African family, specifically to make the marriage bond monogamous, exclusive, and longer-lasting and to increase paternal investment in offspring.

Interestingly, there is evidence that this trend actually began some two centuries before the colonial era. Previously, the African family had been even more matrilineal, matrilocal, and matriarchal:

Murdock proves beyond reasonable doubt that the most ancient form of unilineal descent among the Niger-Congo, and therefore among the Bantu-speaking peoples (whose languages belong to the Niger-Congo family), was matriliny. He specifically reconstructs this feature for the proto-Bantu. He demonstrates it through his mapping of the scattered, relict preservation of matriliny all across the Niger-Congo-speaking regions, even in the Kordofanian branch of the Niger-Congo languages, which is spoken far away from the rest of the family in Sudan.

[â¦] The oral traditions of the Kanyok, who belong to the Central Savanna Bantu subgroup, still remember their shift from matrilineal to patrilineal descent a number of centuries ago, as John Yoder reveals. Most telling of all, the founders of the clans of the Gikuyu of Kenya are female, even though today the Gikuyu are strongly patrilineal. By definition, matrilineal clans must have female founders; therefore, this is undisputed evidence for prior matriliny among the Bantu-speaking peoples of the eastern Kenya highlands.

[â¦] The historical priority of matriliny among the Niger-Congo peoples in generalâas well as among peoples speaking languages of the Bantu subgroup of Niger-Congoâis extensively and convincingly demonstrated by the comparative ethnographic evidence. Recent work in linguistic reconstruction directly supports the view that the early Bantu communities, who established themselves successively more widely in the rainforest and then in the southern savannas and eastern Africa during the last three thousand years BCE, observed unilineal descent in the form of matrilineages and/or matriclans.(Saidi, 2010, pp. 13-14)

According to Saidi (2010, pp. 12-19), sub-Saharan Africa saw a relative shift of power from women to men from around 1500 onwardâapparently as a result of warfare induced by the slave trade. On the one hand, war enhanced the prestige of men through the plundered wealth they brought to their communities. On the other, women looked to men for protection during times of war.

Was there previously, then, a golden age of non-oppression? And are African women now oppressed? In truth, words like âoppressionâ are easily abused in a context where the goal of life is not self-maximization. Yes, African women produce far beyond their own needs, but the economic surplus goes primarily to their children. If anyone is getting something for nothing, it is surely the children.

But thatâs not how Africans themselves see itâor for that matter humans in any traditional society. Children are literally seen as the âafter-life.â Itâs not out of masochism that African mothers make sacrifices for them. Itâs out of a profound belief that âno one gets out of here aliveââother than oneâs children and their descendents.

The Geography of the Noosphere
Anatoly Karlin
• 345 Comments
← Skin Color and the Discrimination ParadigmThe African Outlier →
Hide 10 CommentsLeave a Comment
"Are African Women Oppressed?"
• 10 Comments
Commenters to Ignore
Commenters to ignore (one per line)