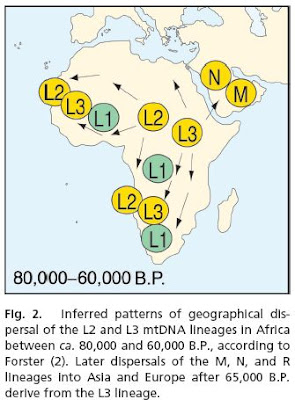 Expansion of modern humans out of Africa and within Africa. Mellars (2006).

When we discuss the origins of modern humans, the term âOut of Africaâ is a bit misleading. Our common ancestors came not from Africa as a whole but from a relatively small area somewhere in East Africa. Beginning around 80,000 years ago, this area was the scene of several population expansions that culminated in a âbig bangâ c. 60,000 BP (Watson et al., 1997). This was a sustained expansion that pushed out of Africa and into Europe, Asia, Oceania, and the Americas.

These modern humans spread at the expense of more archaic âhomininsâ: Neanderthals in Europe and West Asia, and other poorly known groups elsewhere. But the latter were not totally replaced, as seen in the 1 to 4% Neanderthal admixture of present-day Europeans, East Asians, and Papuans. This has led some people to quip that only Africans are pure Homo sapiens:

Better yet, and a blow to Caucasian and Asian racists, the comparison of the human and Neanderthal genome makes it clear that it is only Africans who are 100 percent Homo sapiens, while in European (including American and Australian settlers) and Asian populations one can find up to 4 percent DNA stemming from the archaic and often maligned Neanderthal species – a hominid that went extinct more than 20,000 years ago. (Camphausen, 2010)

Well, no. Sub-Saharan Africans actually have more archaic admixture. The difference is that it came not from Neanderthals but from archaic groups within Africa. About 13% of the sub-Saharan gene pool comes from an earlier expansion of pre-modern hominins that occurred c. 111,000 years ago and seems to correspond to the entry of Skhul-Qafzeh hominins into the Middle East (Watson et al., 1997). This higher level of admixture may have come about because archaic Africans were behaviorally and physically closer to modern humans than the Neanderthals were.

Nonetheless, these âPaleoafricansâ were clearly archaic. They lacked something that modern humans had. What was this disadvantage that ultimately removed them from the struggle for existence? The answer is much debated, but most authors posit a limited capacity for symbolic thinking and social organization:

Thus, when we discuss human origins, the real split was not between Africans and non-Africans but rather between two groups of Africans: archaics and moderns. Dienekes (2005) uses the terms âPaleoafricansâ and âAfrasiansâ:

It is common to distinguish between Africans and non-Africans, with the former being much more genetically diverse than the latter. But, the real “gap” in human origins seems to be between the really old Africans (“Paleoafricans”) and the rest (“Afrasians”).

The Paleoafrican element is entirely confined to Africa, while the Afrasian one is found in both Africa and Eurasia. Indeed, modern humans can be entirely split into two groups: (i) a group of “pure” Afrasians which includes all non-Africans, and (ii) a group of Afrasian-Paleoafricans which includes all non-Caucasoid Africans. Human groups of entirely Paleoafrican origin, unhybridized with the younger Afrasians are no longer in existence.

← The Puzzle of Neanderthal AdmixtureOut of North Eurasia →
Current Commenter
says:
Current Date at Time Now
Leave a Reply - Comments on articles more than two weeks old will be judged much more strictly on quality and tone
Cancel Reply
Commenting Disabled While in Translation Mode