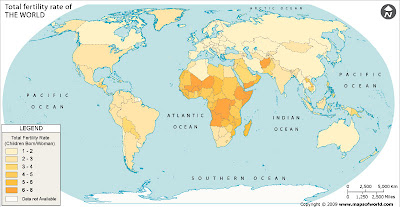 Throughout most of the world, the demographic transition has played out as predicted. Fertility rates have fallen to replacement level and even lower, first in Europe and North America and more recently in East Asia, Southeast Asia, the Middle East and North Africa. The exceptions are societies where religious fundamentalists exert a strong influence on childbearing: Mormons and Amish in the United States, and Islamists in Saudi Arabia, Afghanistan, and Pakistan.
There is, however, an area where the demographic transition seems permanently stalled for reasons unrelated to religion. That area is sub-Saharan Africa. How come?
This puzzle caught the attention of anthropologist Patricia Draper back in the late 1980s. Sub-Saharan Africa had become an outlier of high fertility, even after adjustment for those factors that were lowering birth rates elsewhere. This excess fertility seemed to be due to a different social environment for mating and reproduction:

[â¦] in much of Africa, not only among country people but among urban populations as well, there persists high fertility and a pattern of parental investment in which both mothers and fathers invest, by Western standards, relatively little in each offspring and pursue a pattern of delegated parental responsibility (Draper and Harpending 1988). Coupled with low investment parenting is a mating pattern that permits early sexual activity, loose economic and emotional ties between spouses (Potash 1978), and in many cases the expectation on the part of both spouses that the marriage will end in divorce or separation, followed by the formation of another union (Aldous 1962; Lowy 1977; Oppong 1974; Mair 1953; Gibson 1958; Hunter 1961; Tuupainen 1970). Polygyny, still widespread in Africa, inhibits high male parental investment in children [â¦] (Draper, 1989, p. 145-146)

In sub-Saharan Africa, parenting is assumed primarily by the mother and her kin. The parents, especially the father, are thus under much less pressure to limit family size. As Draper notes :

[â¦] people do not scale down expectations for large numbers of children precisely because their understandings about available resources take into account reservoirs of surrogate care among their kin. [â¦] African men may see no urgency in reducing the numbers of their progeny precisely because a characteristically African set of socioecological circumstances permit many children to survive despite low father contribution to child support. (Draper, 1989, p. 147)

This is in contrast to the situation of parents elsewhere, particularly in modern urban settings, where a larger family perceptibly reduces the resources left over for the parents.
Will things change in the near future? Much depends on whether African families adopt the Eurasian marriage system, i.e., monogamy, long-lasting marital bonds, and high parental investment in children (including high paternal investment). To date, despite the efforts of missionaries and government authorities, there has been little change in this direction.
African men, in particular, are reluctant to assume a more active parental role:

Much of rural African subsistence is based on the work of women in their gardens; men make only modest contributions. Typically, rights in land are held by men by virtue of their membership in kinship or village units. A man who wishes to add another wife is under few constraints (provided his kinship group has the land and bridewealth), since women, in effect, pay their own way. They produce food, and they rear children. In rural areas, when a man marries an additional wife, he is awarded additional fields for this woman and her children (Bryson 1981). The importance of male labor to support such households is reduced. In former times, before colonially imposed peace, the male role in defense was important. But since central governments have been present, men who remain in rural villages spend their time in leisure, in management of household labor, or in local political affairs (Potash 1978). More recently, men absent themselves for long periods in migratory labor. They send remittances home that help to pay school and medical fees and to buy clothing. Nevertheless, the work of feeding people remains with women (Hafkin and Bay 1976; Vaughan 1983).

[â¦] Many efforts have been made to induce African men to increase their agricultural labor. The more successful of such ventures have followed the introduction of cash crops and the development of markets. Men are more willing to work at raising cash rather than traditional subsistence crops. However, since most cash crops are not food crops, women continue to do the subsistence farming, for which cash conversion is less possible, and they work even harder, since the men are busy with cash crops and have even less time for periodic help in the family gardens at clearing and harvest time (Obbo 1980; Whiting 1977; Kelley 1981). Characteristically, men do not return their earnings from cash crops to the household economy. This money is held separately and spent by men on their own projects (Vellenga 1983; Abu 1983; Bryson 1981). (Draper, 1989, p. 152)

As Africans migrate to other parts of the world, they tend to recreate the African marriage system in their host countries by using local people and institutions as âsurrogate kinâ Draper describes the situation in England, where young African couples often place their children in foster homes:

As might be expected, the outcome for all concerned does not work in the way it is expected to in West Africa. The foster parents interpret the infrequent visiting of their wardsâ ârealâ parents as signs of parental neglect and become strongly attached to the foster children. This sometimes results in legal suits for transfer of custody to the foster parents (Ellis 1977). Meanwhile, the African parents make no comparable assumption that the delegation of care means they have surrendered formal rights in children. They consider that by having made safe and reliable arrangements for the care of children and by regular payment of fees, they are dispatching their immediate responsibility. (Draper, 1989, p. 164)

Ironically, when infertile Western couples go to Africa to adopt, as is increasingly the case, the adopted child evokes a degree of parental attachment that it would not normally evoke from its natural parentsâeven in the best of circumstances.