Thereâs a blue hole in the South China Sea. Longdong (Â«Dragon HoleÂ») is an astonishing 300,89 meters deep, in deep blue waters around Yongle, a major coral reef in the Paracel islands (or Xisha, in their Chinese denomination).

Cynics may argue that after the recent ruling in The Hague largely against Chinaâs Â«nine-dash lineÂ», the whole South China Sea would be more like a black â not blue â geopolitical hole, where serious turbulence is all but inevitable.

I have examined before how the South China Seaâs history is now colliding with imperatives derived from the Westphalian system, and how the USâs Â«pivot to AsiaÂ» is accelerating conflict. I have also examined how the US Navyâs obsession with Â«accessÂ» actually tramples which sovereign nation is entitled to profit from the surrounding waters of a bunch of islands or Â«rocksÂ».

And then, thereâs that inescapable logic that envelops all energy wars: Â«Itâs the oil, stupidÂ».

Into the deep blue

The current territorial dispute centered between China and the Philippines â much more than between China and ASEAN â and revolving around what is prescribed by the UN Convention on the Law of the Sea (UNCLOS), will be ultimately solved by a straightforward decision. Manila will have to decide between following The Hagueâs ruling to the letter; or to back down, de facto, on sovereignty to the benefit of making gains, sooner rather than later, on energy security â and in partnership with the Chinese. Filipino President Duterte has already given signs that he will opt for pragmatism.

CNOOC and other Chinese oil majors are going no holds barred to exploit oil and gas in the South China Sea. But thereâs a huge catch. The absolute majority of geoscientists â for instance, Singapore-based members of the Southeast Asia Petroleum Exploration Society (SEAPEX) â agree that most of the energy resources are actually outside of Chinaâs Â«nine-dash lineÂ», thus nowhere near those disputed rocks, reefs, and Â«low tide-elevationsÂ».

Only a few places in the Spratly islands would qualify as a good deal. Essentially, in the deep, deep water â much deeper, at 6,000 meters, than the Â«Dragon HoleÂ» â what exists is oceanic crust; no source rock for oil and gas; and worse, no reservoirs in which oil and gas could accumulate.

The US Energy Information Administration estimated three years ago that the South China Sea contains only 11 billion barrels of oil and 190 trillion cubic feet of gas as Â«commercially viableÂ» reserves.

As a comparison, that would be similar to all the oil that exits in Mexico. Or in Western Europe (without considering Russia, of course). And this applies to the whole South China Sea â including areas that undisputedly belong to some of the littoral nationsâ Exclusive Economic Zones (EEZs).

For the Philippines â or even Vietnam â that could be a game-changer. But not for China. Even if all that energy would be shipped in bulk to China in the near future, it would be good enough for only a few years of consumption.

The South China Sea is actually more crucial as privileged transit sea lanes for over a third of global oil and half of global liquefied natural gas (LNG). At least 10% â and rising â of Chinaâs total energy consumption travels the South China Sea.

But why the obsession with underwater energy exploitation remains?

Once again we need to go back to the Chinese concept of Â«mobile sovereigntyÂ». Enter the Haiyang Shiyou 981 (HYSY 981) deepwater oil-drilling rig. HYSY 981 has been famously described by none other than the head of CNOOC, Wang Yilin, as a Â«strategic weaponÂ» part of China

So when CNOOC uses HYSY 981, thereâs no need to Â«occupyÂ» an island, a rock, a reef, surrounding waters, whichever way UNCLOS may choose to describe them. You move your Â«strategic weaponÂ» to a disputed patch of the sea; do your deep sea exploring; extract what you can; and then move back to international waters. The only thing you need is a hand from the Chinese Navy to protect you for a short period of time â for instance, from the Vietnamese Navy. And if the going gets tough, you can always pull back as a gesture of goodwill.

Few in the West may know it, but China now is building and deploying way more HYSY 981s than military hardware. Welcome to the Asian, underwater version of Â«Drill, baby, DrillÂ».

As far as the energy equation is concerned, Chinaâs relentless island-building in what UNCLOS defined as Â«rocksÂ», and the Â«Drill, baby, DrillÂ» offensive point to the Holy Grail of Chinaâs energy security: escape from Malacca, the imperative that a crucial choke point controlled by the US Navy must be progressively avoided.

It does not matter that not a whole lot of oil and gas will be found in the South China Sea. What matters that it is part of a very long term web strategy â through which Beijing invests

in setting up chains/infrastructure all the way from the Indian Ocean to the Western Pacific to guarantee/protect its trade/energy supply. 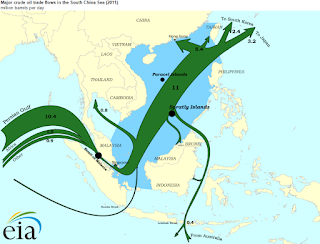