Humanitarian imperialism as applied to what the Pentagon loves to define as MENA (Middle East-Northern Africa) has led, according to Amnesty International, âto the largest refugee disaster since the Second World War.â

You all remember that NATO/AFRICOM coalition of the willing, âledâ by King Sarko the First, then President of France, with US President Barack Obama âleading from behindâ and a former Secretary of State, now presidential candidate with a campaign chest of $2.5 billion, coining a gloating âWe came, we saw, he diedâ.

Well, this fabulous collection of humanitarian imperialists is still on the loose, now killing â by proxy â across the waters of the Mediterranean, aka Club Med, aka Mare Nostrum, after they destroyed a viable state â Libya, a secular Arab republic â under the pretext of preventing a âgenocideâ. 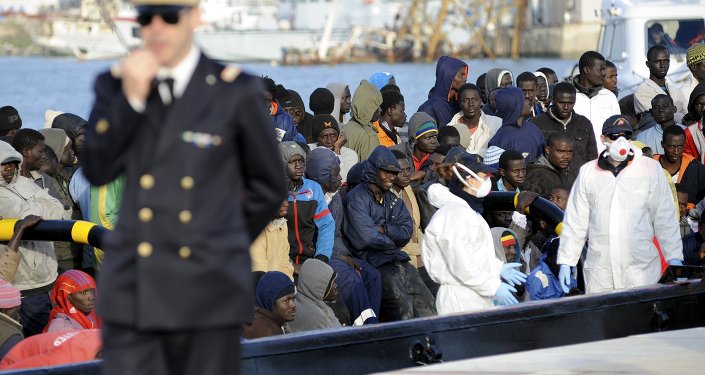 Asked about it today, as he recently pontificated in relation to the Armenian genocide, that pathetic excuse for UN Secretary-General, Ban-Ki Moon, would say the potential massacre in Libya might â and the operative word is âmightâ â not even qualify as an âatrocity crime.â The six-month humanitarian bombing of Libya engineered to prevent a highly hypothetical âatrocity crimeâ ended up âliberatingâ at least 10 times more people from their lives than the previous skirmishes between Col. Gaddafiâs troops and weaponized ârebelsâ, most of them hardcore Islamist militias, now free to wreak jihadi havoc from eastern Libya to northern Syria.

Humanitarian imperialism as applied to what the Pentagon loves to define as MENA (Middle East-Northern Africa) â from Libya to Iraq, Syria and now Yemen, as well as sub-proxy wars in Mali, Somalia and Sudan â has led, according to Amnesty International, âto the largest refugee disaster since the Second World War.â Amnesty estimates that no less than 57 million people have been turned into refugees by 2014.

A crucial subplot is that according to the International Organization on Migration (IOM), the number of refugees dying as they tried to reach Fortress Europe rose by more than 500 percent between 2011 and 2014.

This means humanitarian imperialism, as applied by the Pentagon/NATO/AFRICOM, handed the waters of the Club Med to the real winners: a vast human trafficking racket that includes smugglers, corrupt police and even âterra-ristsâ.

Across Europe, only Italy â to its credit â is really outraged, and willing to accept at least a fraction, a few really, of the wretched African boat people. After all, the privileged exit point is âliberatedâ Libya and the privileged entry point is Italyâs Sicily. France, Germany, the UK and Sweden follow Italy with much more modest attempts.

This aphasiac EU/NATO wall of silence is due to the fact that Europe now is mostly about anti-immigration political parties running amok. After all would-be immigrants are perfect scapegoats. As fearful ânationalistsâ define them, they flatten wages; they live off welfare; they are mostly criminals; they reproduce like rabbits; they destroy the ânational identity; and of course there are so many âterra-ristsâ among them who want to submit Europe to the chador and Sharia law.

This fearful, austerity-ravaged EU subjugated by NATOâs military diktats cannot possibly muster the will to build a common, decent policy to confront the tragedy of a Club Med putrified by a tsunami of African bodies. A great deal of the EU in fact suspended Operation Mare Nostrum â opting to control/police the borders of Fortress Europe instead of acting on humanitarian principles.

A modest proposal would involve bombing smuggling boats in their hideaways before they are filled up with their tragic human cargo; under UN protection, establish in the âliberatedâ Libyan coastline humanitarian stations able to process those eligible for political asylum in the EU; facilitate their air or naval travel to the nations ready to receive them; or â using American methodology â drone the âenemyâ to smithereens, as in the smugglers and their financiers. After all US drones are expert in the matter, operating under Obamaâs infamous âkill listâ and totally oblivious to international law.

That, though, will never happen. As Nick Turse demonstrates in a new, path-breaking book, Libya was merely AFRICOMâs first war (then transferred to NATO, as I examined here); the Pentagon has much nastier plans in its evolving pivoting to Africa.

Meanwhile, those fabulously wealthy oil and gas rackets in the Persian Gulf â the same ones buying every ostentatious sign of luxury between Paris and London â are busy âcreatingâ the bulk of the largest refugee crisis since World War II: in Syria, a privileged theatre of their proxy war against Iran.And the House of Saud oil hacienda â with the Empire of Chaos âleading from behindâ but providing the bombs, the fighter jets, the intel, and the escalation, via nine US warships dispatched to Yemeni waters â is also busy prosecuting its bombastic âDecisive Stormâ over the poorest Arab nation, setting the scene for yet another chapter of the rolling refugee crisis.

In Afghanistan, the Taliban have already announced their new spring offensive starts this Friday; NATO, whose collective behind was royally spanked by a few thousand Taliban with fake Kalashnikovs, wonât be even âleading from behindâ.

And at the bottom of the Mare Nostrum lies, in full putrefied regalia, the EU/NATOâs civilized corpse. Questions for the European Dependencies
Plumbing the Colonials
Fred Reed
• 145 Comments • Reply
← Eurasia As We (And the U.S.) Knew It Is...Oil Geopolitics and the âEconomic Cor... →
Current Commenter
says:
Current Date at Time Now
Leave a Reply - Comments on articles more than two weeks old will be judged much more strictly on quality and tone
Cancel Reply