WASHINGTON – Before this – thankfully – last United States presidential debate, Republican candidate Senator John McCain had promised “I’ll whip [Barack] Obama’s you-know-what”. Well, he whipped nothing. He told Americans he was not President George W Bush. And then he presented himself as Joe the Plumber – a new working class heir to vice presidential candidate Sarah Palin’s Joe Six-Pack. And then he got “hurting and angry”. And then he lost the plot. Independent voters duly took note – and awarded one more debate to Obama. Three to none. Game virtually over.

Obama – always cool and calculating, carefully hedging his bets – still refuses to stare America in the face and admit that the real economy will tank, and the resulting mass unemployment will be proportionally as devastating as during the 1930s.

Both McCain and Obama remain prisoners of the neo-liberal Washington Consensus. Obama’s top economic advisor is Austan Goolsbee, a Friedmanite from the University of Chicago, not exactly someone capable of reasoning outside of the golden Goldman Sachs box.

But the whole scenario gets more dangerous. As McCain inexorably implodes, an extremely angry Republican party in most of its strands rears its ugly head – the extraordinary levels of hate at recent McCain-Palin rallies are just the tip of the iceberg. This correspondent has seen the mob become really brown-shirt scary, brandishing “Obama bin Lyin” placards or yelling “Kill him!” In the official Republican website in Sacramento, California, there was even a direct link between Obama and Osama bin Laden – with an explicit call to “Waterboard Barack Obama” (it was finally pulled out by Republican leaders).

Meanwhile, not insignificant hordes of sensible Republicans are in desertion mode, appalled by the shenanigans of the mooseburger-eating creationist from Alaska. As the real economy on ground level is bound to get much worse before election day, that will only add more fuel to Republican fire, something that happens to turn off independent and undecided voters in droves. All conditions are in place for an Obama landslide.

Obama is leading in Ohio, as in virtually any swing state except Indiana, according to Real Clear Politics polls. This is due a great deal to the Obama campaign’s formidable ground game. According to Democratic operative Josh Lyman, the Obama headquarters in Columbus, Ohio, a mega-church with a basement the size of a supermarket, is staffed by no less than 600 hyperactive tech youths. So it may all translate into an Obama landslide. And then what?

Requiem for a revolution

It is now funeral rites time for the Reagan Revolution – the rich gumbo of the moneyed northeast mixed with southern New Puritans finally crashing with massive indigestion, leaving in its wake legions of indebted-to-death, flat-waged-to-death Americans.

But will it be funeral rites time for domestic, legalized corporate crime (a majority of US corporations don’t even pay any income taxes) and diversionary wars of choice in the Middle East-Central Asia “arc of instability”?

The Reagan Revolution spawned al-Qaeda, which spawned blowback, which spawned serial, over-inflated Pentagon budgets. American taxpayers have shelled out over $1 trillion to fight elusive “terrorists” – money for nothing. It’s impossible not to be reminded of one Bin Laden a few days before the 2004 presidential election, asserting in his “Message to the American people” video that al-Qaeda’s strategy was to bleed the empire to bankruptcy. It has been a slo-mo 9/11 for over seven years now – with the 2008 financial crisis as the icing on the gory cake.

Will it be the end of serial bubbles, which handsomely profited no more than the wealthiest 3 million Americans (the real Masters of the Universe, now controlling 20% of the country’s wealth, and buying every congressman in sight) – while the average wage of the average US worker is lower now than in 1973?

Neither Obama nor McCain is admitting that the US remains below average as an industrialized nation in a whole range of indicators. Obama has said so, but McCain is not answering whether the budget for US higher education will increase. Neither is answering whether the American gulag of 2 million incarcerated citizens will be shrunk. Neither is flatly admitting the US government must regulate a series of key industries and competently provide services.

Both prisoners of the “war on terror” framework, neither admits that rampant, worldwide hardcore militarization is not the answer, compared to better diplomacy and better investigative teams proficient in foreign languages. Under the sketched, unadventurous Obama doctrine, the Bush doctrine’s Iraq war has softly migrated from nation-building to “realist” stabilization.

And then there are the “invisible” crisis numbers. The CDS market – the market for credit default swaps invented by McCain’s economic adviser Phil Gramm in 2000 (via the Commodities Future Modernization Act) – is now worth no less than a staggering $62 trillion. It was “only” $900 billion in 2000. This Wall Street speculation racket is now an astonishing five times the size of all the holdings in the New York Stock Exchange.

Nobody knows what will happen to it – a leftover from the fall of Lehman Brothers. And no one is even starting to talk about the $1 trillion black hole of credit-card debt which may well swallow two remaining US bank giants, JPMorgan Chase and Bank of America.

The now indispensable Nouriel Roubini, the New York University professor who predicted the financial crisis way back in 2006, is adamant: this will be the worst US recession in 40 years, lasting as long as 24 months, with unemployment reaching 9% and depressed home prices falling another 15%.

Roubini stresses, “The US government will need to double its purchase of bank stakes and force lenders to eliminate dividends to save them from bankruptcy.” And forget about a market rally. “The stock market is going to stop rallying soon enough when they see the economy is really tanking right now.”

As for total credit losses from the subprime mortgage market meltdown, they will be “closer to $3 trillion”, up from his initial estimate of $1 trillion to $2 trillion. Last week, the (discredited) International Monetary Fund said it would be $1.4 trillion. The IMF is now warning of imminent “systemic meltdown”.

And that’s nothing compared to warnings from former Comptroller General David Walker – the head of the US government’s accountability office for 10 years. Walker told talk show host Bill Maher “both these guys that are running right now will only make it worse. The bottom line is both of their proposals will make our debts and our deficits worse.”

Maher and Walker joked that the debt clock in New York has run out of digits. According to Walker, “The number that they were showing was over $10 trillion. We got over $40 trillion more off the balance sheet. This country is in a $55 trillion hole. That’s $480,000 per household [compare it to median household income in America, which is less than $50,000 a year]. That’s the number we need to be focusing on. It goes up by $2 to $3 trillion a year even with a balanced budget.” And all this on top of urgent, necessary reforms of social security, the health care system, and the tax system.

In Western Europe, there are already rumblings of “a new revolution” – the cultured classes talking about an insurrection of the analog against the virtual, of re-establishing the link between money and value. Conceptually, America is not that far advanced. But all the conditions seem to be in place at least for Obama to ditch the “war on terror” – and launch a war on poverty. Will he have the balls – and the means – for it? 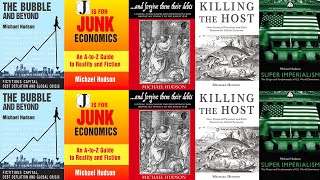 When Exactly Did the AngloZionist Empire Collapse?
The Saker
• 311 Comments • Reply
← A Bailout and a New WorldThe $55 Trillion Question →
Current Commenter
says:
Current Date at Time Now
Leave a Reply - Comments on articles more than two weeks old will be judged much more strictly on quality and tone
Cancel Reply