Gen. Breedhate has been spewing out his best Dr. Strangelove impersonation, warning that evil Russia is invading Ukraine on an everyday basis. The German political establishment is not amused.

Tusk, while meeting with US President Barack Obama, got Divide and Rule backwards; he insisted, âforeign adversariesâ were trying to divide the US and the EU â when itâs actually the US that is trying to divide the EU from Russia. And right on cue, he blamed Russia â side by side with the fake Caliphate of ISIS/ISIL/Daesh. 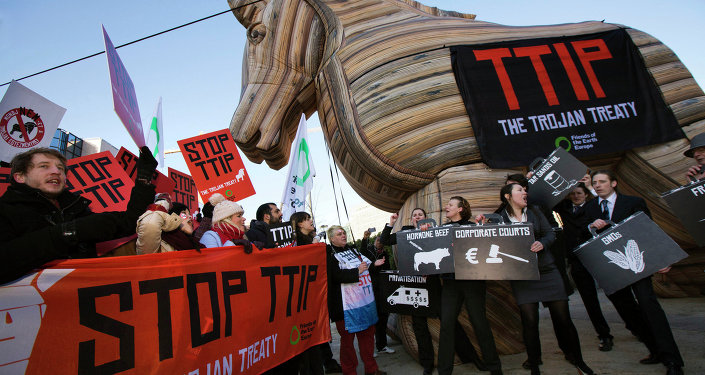 Tuskâs way out? The EU should sign the US corporate-devised racket known as Transatlantic Trade and Investment Partnership (TTIP), or NATO on trade. And then the âWestâ will rule forever.

NATO may indeed incarnate the ultimate geopolitical/existential paradox; an alliance that exists to manage the chaos it breeds.

And still, revolving around NATO, there are many more diversionist tactics than meet the eye. Take the latest uttering by notorious Russophobe Dr. Zbigniew âGrand Chessboardâ Brzezinski. In a conference at the Center for Strategic and International Studies, Dr. Zbig advanced that the US and Russia should have an understanding that if Ukraine becomes a member of the EU, it wonât become a member of NATO.

Well, dear Doctor, we got a problem. The EU has zero interest in incorporating a failed state on (immensely expensive) life support by the IMF, and technically mired in a civil war.

On the other hand the US has undivided interest in a Ukraine as NATO member; thatâs the whole rationale of the relentless post-Maidan demonization of Russia.

Call it the Dr. Zbig maneuver; neo-con wishful thinking; what certain key Empire of Chaos/Masters of the Universe factions would die for; or all of the above; the ultimate target is regime change and dismemberment of Russia. Russian intelligence knows all about the inside story.

To forestall it, there would be only one possible settlement, including; end of sanctions on Russia; end of the raid on the ruble/oil price war; eastern European nations out of NATO; Crimea recognized as part of Russia; eastern Ukraine totally autonomous but still part of Ukraine.

We all know this wonât happen anytime soon â if ever. So a nasty Cold War 2.0 atmosphere is bound to prevail â alongside with relentless demonization reaping its benefits. A new Gallup poll shows most Americans now see Russia â ahead of North Korea, China and Iran â as the USâs public enemy number one and the greatest threat to the West.

Let Me Take You on a Missile Cruise

The Empire of Chaos dream of regime change in Russia has always hinged on controlling large swathes of Eurasia. A puppet in Moscow â a carbon copy of the drunken stooge Yeltsin â would free up Russiaâs immense natural resources for the West, with those from the contiguous Central Asian âstansâ as a bonus.

If on the other hand Russia maintains its influence, even indirectly, in Ukraine and on Central Asiaâs oil and natural gas wealth, Moscow is capable of projecting itself again as a superpower. So once again this is largely about the domination of Eurasian Pipelineistan; anything else means a direct threat to the unipolar world.

Russian intelligence is very much aware of relentless US pressure geared to breaking parts off of Russia, weakening them, until Russia becomes a chaos wasteland not dissimilar to Iraq or Yemen â with natural resources then flowing freely to the West.

Thatâs why the pressure has been ratcheted up to nearly nuclear war proportions. Some adults in the EU though are starting to get the picture.

This set of circumstances unveils the specter of Cold War 2.0 turning hot as even more bewildering. Needless to add, Poland, Ukraine, and other hapless Eastern Europeans would be mere pawns if a full-blown civil war does break out in Ukraine â the explicit aim of that American fantasyland, the Kaganate of Nulands, or Nulandistan.

In a â admittedly terrifying â war scenario, Russia would seal eastern Ukraine airspace against US air power using an array of sophisticated defensive missiles. Tactical nuclear weapons would be used for the first time. Europe would be basically defenseless as NATOâs Dr. Strangeloves would be tempted to launch a full-scale nuclear war. Still, NATOâs ICBMs, cruise missiles and jet fighters would not pierce the S-400 and S-500 Russian defensive missile systems.

Provoking the Russian bear is a self-defeating proposition. Russia quitting the landmark Treaty on Conventional Forces in Europe is really serious business; NATO is beyond alarmed. Not to mention Moscow announcing it has the right to place â and may even have placed â nuclear weapons in Crimea. Meanwhile the Russian military continue to test NATOâs defenses by flying their planes into NATOâs defensive perimeter.

Eurasia swings from one minute to another from reconciliation to provocation. Cui bono? Moscow is a master in keeping Washington and NATO guessing.

It was Putin that first wanted, years ago, to create a vast trade emporium from Lisbon to Vladivostok, also including China, using high-speed rail to avoid the US-controlled seas. That was the trade-fuelled original plan, rather than a China-Russia alliance against NATO.

What the Empire of Chaos achieved in Ukraine, at least for now, was to divide Eurasia into three competing blocks; Germany-France allied with the US (but with both now having second thoughts); Russia; and China offset by Japan. Once again, thatâs Divide and Rule â with the US as perpetual hegemon always capable of adapting and tweaking its proverbial bomb-and-bully foreign policy strategy.

Yet it ainât over till the fat (geopolitical) lady sings. The Russia-China strategic partnership keeps evolving â check out the upcoming BRICS and SCO summits in Russia this summer. The oil and natural gas wealth of Russia and Central Asia will keep performing their U-turn towards China and Asia. And in a few years the âExceptionalists Rule the Wavesâ mantra will cease to be a game-changer. Can the EU Become a Partner for Russia?
The Saker
• 180 Comments • Reply Zone B Exists, Thus There Is Hope, I Promise You!
The Saker
• 194 Comments • Reply
← Year of the Sheep, Century of the Dragon?Eurasia As We (And the U.S.) Knew It Is... →
Current Commenter
says:
Current Date at Time Now
Leave a Reply - Comments on articles more than two weeks old will be judged much more strictly on quality and tone
Cancel Reply