Something quite extraordinary happened in early November in Kabul.

Taliban interim-Foreign Minister Amir Khan Muttaqi and Turkmen Foreign Minister Rashid Meredov got together to discuss a range of political and economic issues. Most importantly, they resurrected the legendary soap opera which in the early 2000s I dubbed Pipelineistan: the Turkmenistan-Afghanistan-Pakistan-India (TAPI) gas pipeline.

Call it yet another remarkable, historical twist in the post-jihad Afghan saga, going back as far as the mid-1990s when the Taliban first took power in Kabul.

In 1997, the Taliban even visited Houston to discuss the pipeline, then known as TAP, as reported in Part 1 of my e-book Forever Wars.

During the second Clinton administration, a consortium led by Unocal â now part of Chevron â was about to embark on what would have been an extremely costly proposition (nearly $8 billion) to undercut Russia in the intersection of Central and South Asia; as well as to smash the competition: the Iran-Pakistan-India (IPI) pipeline.

The Taliban were duly courted â in Houston and in Kabul. A key go-between was the ubiquitous Zalmay Khalilzad, aka âBushâs Afghan,â in one of his earlier incarnations as Unocal lobbyist-cum-Taliban interlocutor. But then, low oil prices and non-stop haggling over transit fees stalled the project. That was the situation in the run-up to 9/11.

In early 2002, shortly after the Taliban were expelled from power by the American âbombing to democracyâ ethos, an agreement to build what was then still billed as TAP (without India), was signed by Ashgabat, Kabul and Islamabad. 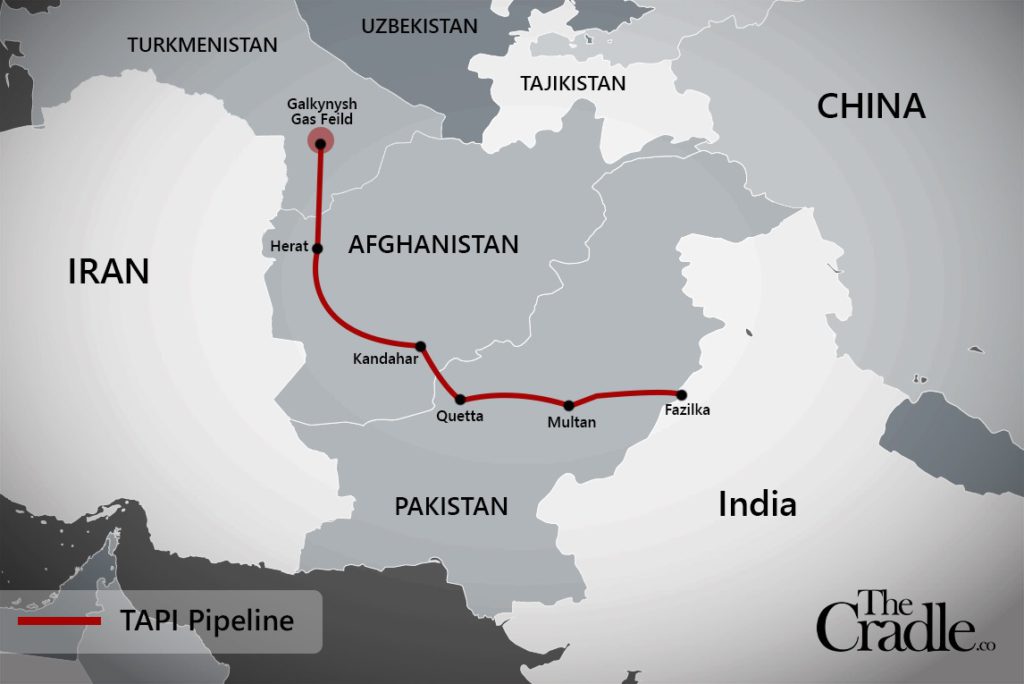 As years went by, it was clear that TAPI, which runs for roughly 800 km across Afghan lands and could yield as much as $400 million annually in transit revenue for Kabulâs coffers, would never be built while hostage to a guerrilla environment.

At the time, the Taliban said they would not attack TAPI and would even provide their own security. The gas pipeline was to be paired with fiber optic cables â as with the Karakoram Highway in Pakistan â and a railway line from Turkmenistan to Afghanistan.

History never stops playing tricks in the graveyard of empires. Believe it or not, weâre now back to the same situation on the ground as in 1996.

The spanner in the works

If we pay attention to the plot twists in this never-ending Pipelineistan saga, thereâs no guarantee whatsoever that TAPI will finally be built. Itâs certainly a quadruple win for all involved â including India â and a massive step towards Eurasiaâs integration in its Central-South Asian node.

Enter the spanner in the works: ISIS-Khorasan (ISIS-K), the subsidiary of Daesh in Afghanistan.

Russian intel has known for over a year that the usual suspects have been providing help to ISIS-K, at least indirectly.

Yet now thereâs a new element, confirmed by Taliban sources, that quite a few US-trained soldiers of the previous Afghan National Army are incorporating themselves into ISIS-K to fight against the Taliban.

ISIS-K, which sports a global jihadi mindset, has typically viewed the Taliban as a group of dirty nationalists. Earlier jihadi members used to be recruited from the Pakistani Taliban and the Islamic Movement of Uzbekistan (IMU). Yet now, apart from former soldiers, they are mostly young, disaffected urban Afghans, westernized by trashy pop culture.

Itâs been hard for ISIS-K to establish the narrative that the Taliban are western collaborators â considering that the NATO galaxy continues to antagonize and/or dismiss the new rulers of Kabul.

So the new ISIS-K spin is monomaniac: basically, a strategy of chaos to discredit the Taliban, with an emphasis on the latter being unable to provide security for average Afghans. That is what underlies the recent horrific attacks on Shia mosques and government infrastructure, including hospitals.

In parallel, US President Joe Bidenâs âover the horizonâ spin, meant to define the alleged American strategy to fight ISIS-K, has not convinced anyone, apart from NATO vassals.

Since its creation in 2015, ISIS-K continues to be financed by the same dodgy sources that fueled chaos in Syria and Iraq. The moniker itself is an attempt to misdirect, a divisive ploy straight out of the CIAâs playbook.

Historic âKhorasanâ comes from successive Persian empires, a vast area ranging from Persia and the Caspian all the way to northwest Afghanistan â and has nothing whatsoever to do with Salafi-jihadism and the Wahhabi lunatics who make up the terrorist groupâs ranks. Furthermore, these ISIS-K jihadis are based in south-eastern Afghanistan, away from Iranâs borders, so the âKhorasanâ label makes zero sense.

Russian, Chinese and Iranian intel operate on the basis that the US âwithdrawalâ from Afghanistan, as in Syria and Iraq, was not a withdrawal but a repositioning. Whatâs left is the trademark, undiluted American strategy of chaos executed via both direct (troops stealing Syrian oil) and indirect (ISIS-K) actors.

The scenario is self-evident when one considers that Afghanistan was the precious missing link of Chinaâs New Silk Roads. After the US exit, Afghanistan is not only primed to fully engage with Beijingâs Belt and Road Initiative (BRI), but also to become a key node of Eurasia integration as a future full member of the Shanghai Cooperation Organization (SCO), the Collective Security Treaty Organization (CSTO) and the Eurasia Economic Union (EAEU).

To hedge against these positive developments, the routine practices of the Pentagon and its NATO subsidiary remain in wait in Afghanistan, ready to disrupt political, diplomatic, economic and security progress in the country. We may be now entering a new chapter in the US Hegemony playbook: Closet Forever Wars.

Fifth columnists are tasked with carrying the new imperial message to the West. Thatâs the case of Rahmatullah Nabil, former head of Afghanistanâs National Directorate of Security (NDS), âthe Afghan intelligence service with close ties to the CIA,â as described by Foreign Policy magazine..

In an interview presented with a series of trademark imperial lies â âlaw and order is disintegrating,â âAfghanistan has no friends in the international community,â âthe Taliban have no diplomatic partnersâ â Nabil, at least, does not make a complete fool of himself.

He confirms that ISIS-K keeps recruiting, and adds that former Afghan defense/security ops are joining ISIS-K because âthey see the Islamic State as a better platform for themselves.â

Heâs also correct that the Taliban leadership in Kabul is âafraid the extreme and young generation of their fightersâ may join ISIS-K, âwhich has a regional agenda.â

Russia âplaying a double gameâ is just silly. In presidential envoy Zamir Kabulov, Moscow maintains a first-class interlocutor in constant touch with the Taliban, and would never allow the âresistance,â as in CIA assets, to be based in Tajikistan with an Afghan destabilization agenda.

On Pakistan, itâs correct that Islamabad is âtrying to convince the Taliban to include pro-Pakistan technocrats in their system.â But thatâs not âin return for lobbying for international recognition.â Itâs a matter of responding to the Talibanâs own management needs.

The SCO is very closely connected on what they collectively expect from the Taliban. That includes an inclusive government and no influx of refugees. Uzbekistan, for instance, as the main gateway to Central Asia for Afghanistan, has committed to participating in the reconstruction business.

For its part, Tajikistan announced that China will build a $10 million military base in the geologically spectacular Gorno-Badakhshan Autonomous Region. Countering western hysteria, Dushanbe made sure that the base will essentially host a special rapid reaction unit of the Regional Department for Organized Crime Control, subordinated to Tajikistanâs Minister of Internal Affairs.

That will include around 500 servicemen, several light armored vehicles, and drones. The base is part of a deal between Tajikistanâs Interior Ministry and Chinaâs Ministry of State Security.

The base is a necessary compromise. Tajik President Emomali Rahmon has a serious problem with the Taliban: he refuses to recognize them, and insists on better Tajik representation in a new government in Kabul.

Beijing, for its part, never deviates from its number one priority: preventing Uighurs from the East Turkistan Islamic Movement (ETIM) by all means from crossing Tajik borders to wreak havoc in Xinjiang.

So all the major SCO players are acting in tandem towards a stable Afghanistan. As for US Think Tankland, predictably, they donât have much of a strategy, apart from praying for chaos.

The Pashtun Will Outlast All Empires, But Can They Hold Afghanistan's Center?
Pepe Escobar
• 51 Comments • Reply

Despair in the Empire of Graveyards
Or Gilbert and Sullivan Come to Afghanistan, Depending on Your Perspective
Fred Reed
• 383 Comments • Reply
← Afghan Chess Pieces Moving Fast and Fur...New Great Game in the Caucasus and Cent... →
Hide 67 CommentsLeave a Comment
"Afghanistan: Between Pipelines and ISIS-K, the Americans Are Still in Play"
• 67 Comments
Commenters to Ignore
Commenters to ignore (one per line)