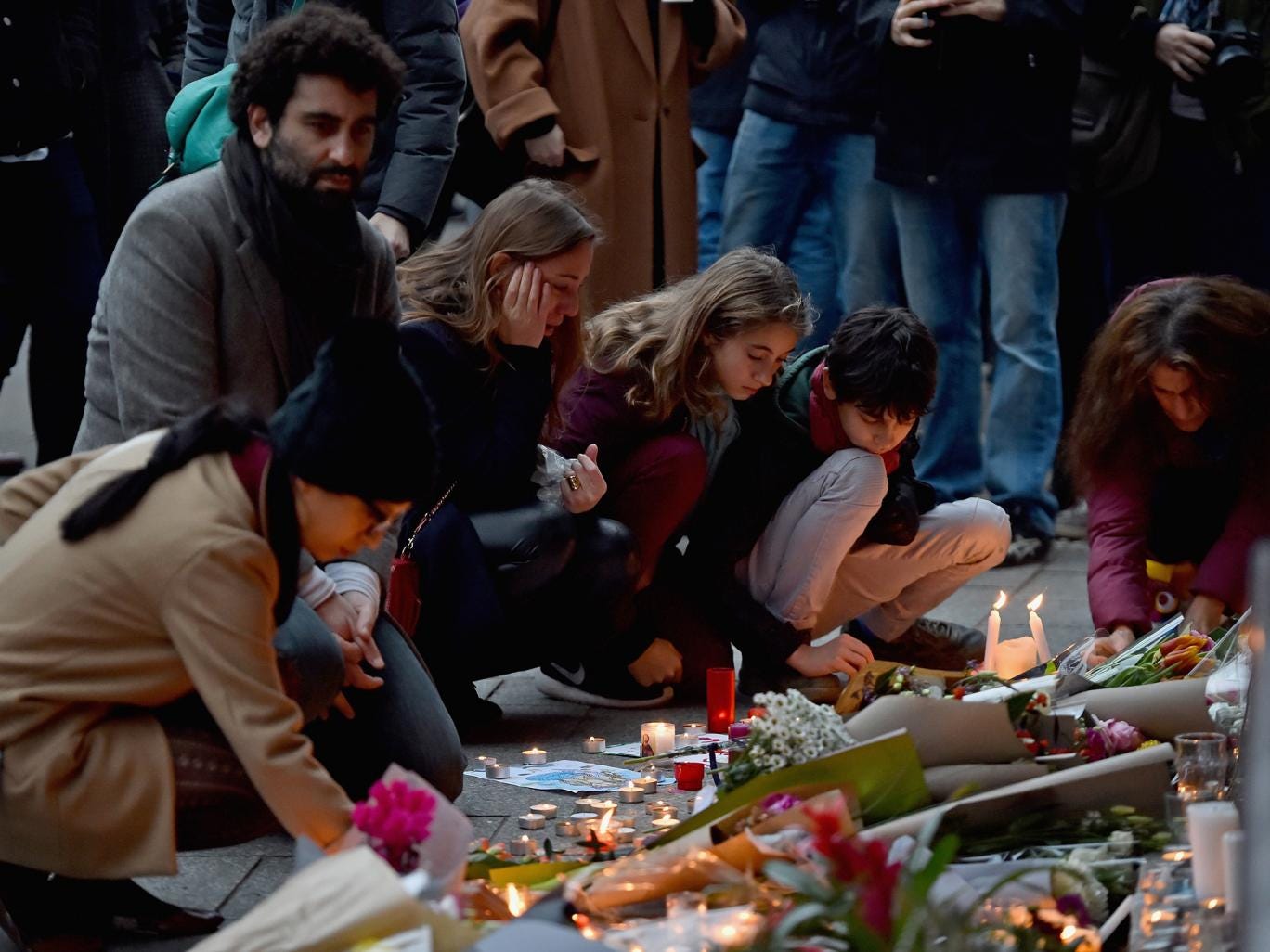 The Islamic State (Isis) has always massacred civilians in large numbers to show its strength and instill fear in its opponents. In the West, people notice these atrocities only when they take place on their own streets, though Isis suicide bombers killed 43 people in Beirut on 12 November and 26 more in Baghdad on 13 November. These attacks are almost impossible to stop because they are directed against civilians, who cannot all be defended, and the bombers are willing to die in order to destroy their targets.

Isis has claimed the Paris attacks, saying that France was targeted because of its air strikes in Syria. The use of eight suicide bombers and gunmen in a national capital, guaranteeing maximum coverage by the media, has all the hallmarks of an Isis operation. One ominous difference from the killings earlier in the year at Charlie Hebdo magazine and in a Jewish supermarket, is that attacks, presumably because of Isis involvement, are getting more sophisticated and better planned. Recruiting, arming, coordinating and keeping hidden the Paris killers until the last moment implies good organisation. The same was true of the smuggling of a bomb on to the Russian plane before it left the ground at Sharm al-Sheikh on 30 October.

What is the explanation for this recent intensification of Isis suicide bombings outside Syria and Iraq? The killing of civilians as complicit in the acts of their governments was always part the ideology of al-Qaeda, an approach most famously demonstrated on 9/11 in New York. The softest of targets is destroyed by bombers or gunmen intent on killing themselves along with their enemies as a demonstration of religious faith.

But there is a further reason why Isis may be intent on showing that it can strike anywhere in the world: for the first time in two years, a period during which Isis has created its own state in western Iraq and eastern Syria, it is being driven back by military pressure on a number of fronts.

In the past, it would deal with its numerous but disunited enemies one after the other, but now it is facing attacks on a number of fronts at the same time. The Syrian army backed by Russian air strikes last week ended the siege by IS of Kweiris Airbase west of Aleppo. It was the biggest Syrian government victory for two years. The Syrian Kurds, in cooperation with the US air force, are advancing south around Hasaka, while the Iraqi Kurds, again with American air support, have captured Sinjar city west of Mosul. Isis will find it difficult to travel between Raqqa and Mosul and may lose its grip on the oilfields of north-east Syria, from which it has derived revenue.

These developments on the battlefields of Iraq and Syria may seem distant from the butchery in the heart of Paris. But it is important to understand that Isis is an effective fighting machine because its military skills, evolved during years of fighting, are a potent blend of urban terrorism, guerrilla tactics and conventional warfare. Its blitzkrieg advances in Iraq in the summer of 2014 were preceded by a wave of suicide bombings using vehicles packed with explosives in Shia districts of Baghdad and central Iraq. The aim was to keep its enemies frightened and off balance and to show to potential supporters that Isis was a power in the land.

Nobody in the outside world paid much attention to the thousands of Iraqi Shia who were killed then and have gone on dying because of Isis terrorist bombings in Iraq. The number of civilians killed in Iraq jumped from 4,623 in 2012 to 9,473 in 2013 and to 17,045 in 2014, according to Iraqi Body Count, an independent website; a high proportion of these killed were Shia victims of Isis bombers and executioners. This savagery is now being repeated in the streets of Paris and Ankara, where 102 demonstrators for peace were killed by two suicide bombers on 10 October.

It is part of Isisâs tactical manual to retaliate against any opponent by any means, with the aim of showing defiance in some spectacular way guaranteed to dominate the international news agenda. Thus, it reacted against US air strikes, which it could not prevent militarily, with videos of American journalists and aid workers being decapitated with horrific deliberation. When cutting off heads ceased to have its previous shock effect, IS burned to death a Jordanian pilot in a cage.

It claims that the killing of civilians is not mindless murder but vengeance: an Isis-related group saying it was behind the destruction of the Russian plane and its 224 passengers showed pictures on the internet of the aircraftâs wreckage interleaved with shots of buildings in Syria shattered by Russian bombs. Isis is making clear that, if any country bombs them from the air, it will reply in kind on the ground, using the methods of urban terrorism backed by a well organised state. It is difficult to think of any example of this happening before.

These acts of terror require some resources, but no high degree of training since targets chosen are defenceless such as the British tourists lying on a beach in Tunisia or the people in Paris who were murdered as they attended a rock concert. Not a great number of Islamic fanatics are needed to carry out these monstrosities, the impact of which echoes around the world. Isis has had a great number of foreign fighters pass through its ranks and it can usually find committed supporters within the countries it intends to target.

There is a further reason why Isis may find it more easy to find and use potential suicide bombers outside the caliphate. One of the setbacks it has suffered this year is the loss of its main border crossing between Syria and Turkey at Tal Abyad, which was captured by the Syrian Kurdish Peopleâs Protection Units (YPG) in June. Half the 550-mile frontier between the Tigris and Euphrates is now held by the YPG, so Isis access to the outside world is much more limited than before. The US has put intense pressure on Turkey not to allow Isis and other Salafi-jihadi groups to cross the border into Syria west of the Euphrates. Volunteers who might previously have travelled through Turkey to join IS in Syria will now stay at home and provide a pool of committed manpower for use in suicide operations.

Isis is under unprecedented military pressure in Iraq and Syria, but this does not mean it is going to implode. It can fight defensively as well as offensively. It looks as if it will not fight to the finish in battles in which enemy ground troops are supported by the US or Russian air forces. Isis commanders are reported to believe that they made a mistake in fighting for so long at Kobani, where they may have lost more than 2,000 fighters to US air strikes. Instead, they will rely more on guerrilla tactics in Syria and Iraq and expand the zone of conflict by carrying out terrorist attacks abroad like those we have just seen in Paris. ← Why Jihadi John's 'Assassination' Is No...Paris Terror Attacks: No Security Can S... →
Current Commenter
says:
Current Date at Time Now
Leave a Reply - Comments on articles more than two weeks old will be judged much more strictly on quality and tone
Cancel Reply