“If anyone from the outside interferes in Ukraine, they should know this: If they create threats for us… we will retaliate immediately. We have all the tools we need to respond, and all the decisions on this (matter), have already been made.”
Russian President Vladimir Putin

There’s no doubt that the retreat from Kherson was a black-eye for the Russian Army. There’s also no doubt that the general who ordered the evacuation made the right decision. True, the optics are terrible, but optics don’t win wars. Strategy, valor and firepower wins wars. Russian General Sergey Surovikin appears to grasp that fact which is why he made the unpopular decision to retreat.

Surovikin could have made the more politically acceptable choice and defended Kherson to the end, but the risks far outweighed the benefits. By all accounts, the 25,000 Russian troops in the city could have easily been encircled and annihilated by Ukrainian artillery. Additionally, Surovikin would have been forced to commit more troops to a rescue mission that would not have advanced Russia’s overall military strategy in the slightest. Russia’s immediate goal is to complete the liberation of the Donbas, a task that is not yet finished and which requires more of the troops that had been pinned-down in Kherson.

For all intents and purposes, the retreat from Kherson was a no-brainer. If the nightmare scenario had unfolded –as many had expected– and thousands of Russian soldiers wound up surrounded and slaughtered in defense of a city that holds little strategic value, then popular support for the war in Russia would have vanished overnight. Neither Putin nor Surovikin could afford to take that risk. So, instead, they opted to pack-it-in and evacuate while they still could, which of course, incited the fury of their critics who are still hopping mad. The good news, however, is that the Kherson public relations disaster will have no meaningful impact on the outcome of the war. Russia is still on-track to achieve all of its strategic objectives despite the pitfalls it has encountered along the way. Here’s a brief recap of the Russian withdrawal from an interview with Colonel Douglas MacGregor:

“When General Surovikin took command… it was decided that Russia was going to wait for a decisive operation to end the war. In other words, no more simply defending southern Ukraine and the territory we’ve annexed, no more expectations of negotiations with anyone– those are over– we have to end the war.

How do you end the war? Well, you launch operations that are so devastating in their destructiveness that the enemy cannot resist them. However, if you are going to do that you’re going to have to scale back current activities. (like Kherson) In other words, you have to make changes on the ground, shuffle troops, change resource commitments because you are now building up for forces that are not yet in southern Ukraine … but are being prepared with this mobilization of 300,000 troops integrated into this new force for future operations… which will come this winter once the ground freezes…. So, I would regard (the withdrawal) as an operational decision with short-term benefit in support of the long-term strategy of building this enormous striking power…The Russians no longer place any confidence in negotiations. I don’t think we could say anything to the Russians at this point that would persuade them to stop.” (“EVERYTHING changes in 4 weeks: Interview with Colonel Douglas MacGregor”, youtube; Start at 50 seconds)

So, according to MacGregor, the repositioning of troops is key to the overall strategy which has changed under Surovikin. Under the new commander, the primary focus of military operations is the annihilation of all forces and assets that allow the enemy to continue to wage war. I suspect that means the removal of the Zelensky regime and his security services, but I could be wrong. In any event, the upcoming Russian offensive is going to be much more in-line with a conventional combined-arms ground war than with the Special Military Operation we’ve seen up to this point. Moscow is determined settle the issue as quickly as possible and as forcefully as necessary. There won’t be any more messing around.

That said, recent reports (see below) suggest that the Biden administration may deploy US combat troops to the theatre in response to any Russian escalation that could threaten to alter the course of the war. If these reports prove to be accurate, then the greatly-anticipated winter offensive could trigger a direct conflagration between the United States and Russia. Given the trajectory of the war to this point, we think it’s only a matter of time before Washington emerges from behind its proxies and engages Russian troops on the battlefield. There are many indications that the Pentagon is already preparing for that eventuality. Secret communications between national security advisor Jake Sullivan and the former Russian ambassador to Washington, Yuri Yushakov, and the former head of the FSB, Nikolai Patrushev, suggest that Sullivan warned his Russian counterparts that the US would not allow Russia to settle the conflict on its own terms, but would take whatever steps were needed to prevent a decisive Russian victory. Check out this excerpt from another interview with Colonel Douglas MacGregor:

MacGregor– “Jake Sullivan talked about the dangers of escalation… He simply said that ‘We see evidence that you, Russia, are preparing to escalate this conflict.’ Which is true; we have been talking about this (impending Russian winter) offensive. ‘And we are warning you against that’ (said Sullivan) The unspoken implication at this point, is that we’re prepared to jump into this conflict in some way because we will not allow you to partition Ukraine. We will not allow you to fight and win this war on your terms……

Napolitano– Do you know whether Sullivan mentioned the presence of the 40,000 US troops (101st Airborne) in Poland?

MacGregor– We don’t (know that) But we think– based on the language that has leaked-out in the paragraph I received from another source, that he (Sullivan) did imply that they have 90,000 troops in Poland and Romania, and that, potentially, if Russia escalated, presumably– on the scale that we think the Russians will escalate– that we (the US) might be prepared to jump in. And we would jump in with 40,000 US troops, 30,000 Polish troops and 20,000 Romanian troops….. Sullivan made it clear that we are in a position to intervene.”

…”What we don’t know is what the Russians said in response, because if you are Russian, the red line is clear: ‘If you move into Ukraine, you’re going to be at war with Russia.’ We seem to be in denial about that.”

Napolitano– “Let me get this straight: Are you of the belief, …that Jake Sullivan…threatened the Russians that if they crossed these red lines, they would meet with US military resistance in Ukraine?”

MacGregor– I think that implication was made. That is the impression I am getting and I don’t think we should be surprised about that because Ukraine’s position is deteriorating very rapidly… And we are very concerned about a Ukrainian collapse. Some estimates indicate that the entire economy and social structure will collapse within 60 days. Some say they are going to general mobilization in Ukraine right now, which may include women, because their manpower base is exhausted. And, remember, people continue to leave Ukraine as much as possible because nobody wants to be stuck in a country that shortly will have no power, no electricity, and where there will be trouble getting water, and trouble getting food. The situation in Ukraine is dire.”

MacGregor– They are preparing for combat operations….

Napolitano– Has the Department of Defense given the President of the United States plans for the entry of US troops into Ukraine? Is that done?

MacGregor– I think those plans have certainly been discussed if not briefed to Jake Sullivan. Certainly, the Secretary of State (Anthony Blinken) is aware. I don’t know what they’ve told the president. My hope is that he received some briefing. Again, this is all very serious because we are in the middle of an election and this could happen without any consultation with Congress whatsoever.

Napolitano– What is the status of the 300,000 reservists that Putin called up a month ago?

MacGregor– The majority of them have already been integrated into formations and units –alot of them have gone into units that were under-strength that are now back to ‘full strength’. Some have gone into new units. (Note: I think MacGregor could be wrong about this. Other analysts suggest that only 80,000 reservists have been sent to Ukraine so far. The process could take a few months before the entire deployment is concluded.) It’s almost complete but, the bottom line is, the low temperature in Ukraine has been 37 degrees. which means you’re still going to be stuck in the mud whether you are attacking or defending. Until the ground freezes, I don’t think alot going to happen…But when the winter arrives and the ground freezes, that is when the Russians will attack. And we see evidence of this from at least three different directions including the east, the southeast and the north. And, judging from the (military) buildup and the weapons systems that are in place and supplies that are available, this is an offensive that is designed to end the war. Whether it will or not, we don’t know. But I think that is the idea.

MacGregor– There’s one last thing I’d like to leave you with: When General Surovikin, the commander of the western theatre accepted his appointment, he made these brief remarks. He said “A Syrian solution for Ukraine is unacceptable.” In other words, we will not allow Ukraine to fall under the influence of various actors that maintain Ukraine in a state of permanent turmoil and war. That’s a very clear signal, that when they launch (the winter offensive) they plan to put an end to the conflict. So, it would be very unwise for us to get in the way of this…..We simply do not have the level of support to guarantee success.” (“This is a Red Line in Ukraine”, Colonel Douglas MacGregor, Judging Freedom)

Russia is now prepared to do whatever it takes to win the war quickly and roll-up the hostile army that poses a threat to its national security. If US forces join the fighting, the calculus for winning could change dramatically, but the strategic objectives would remain the same. No nation can be expected to live at peace when a gun is pointed at its head. That is why Putin opposed NATO membership for Ukraine, and that is why the current war is being fought. 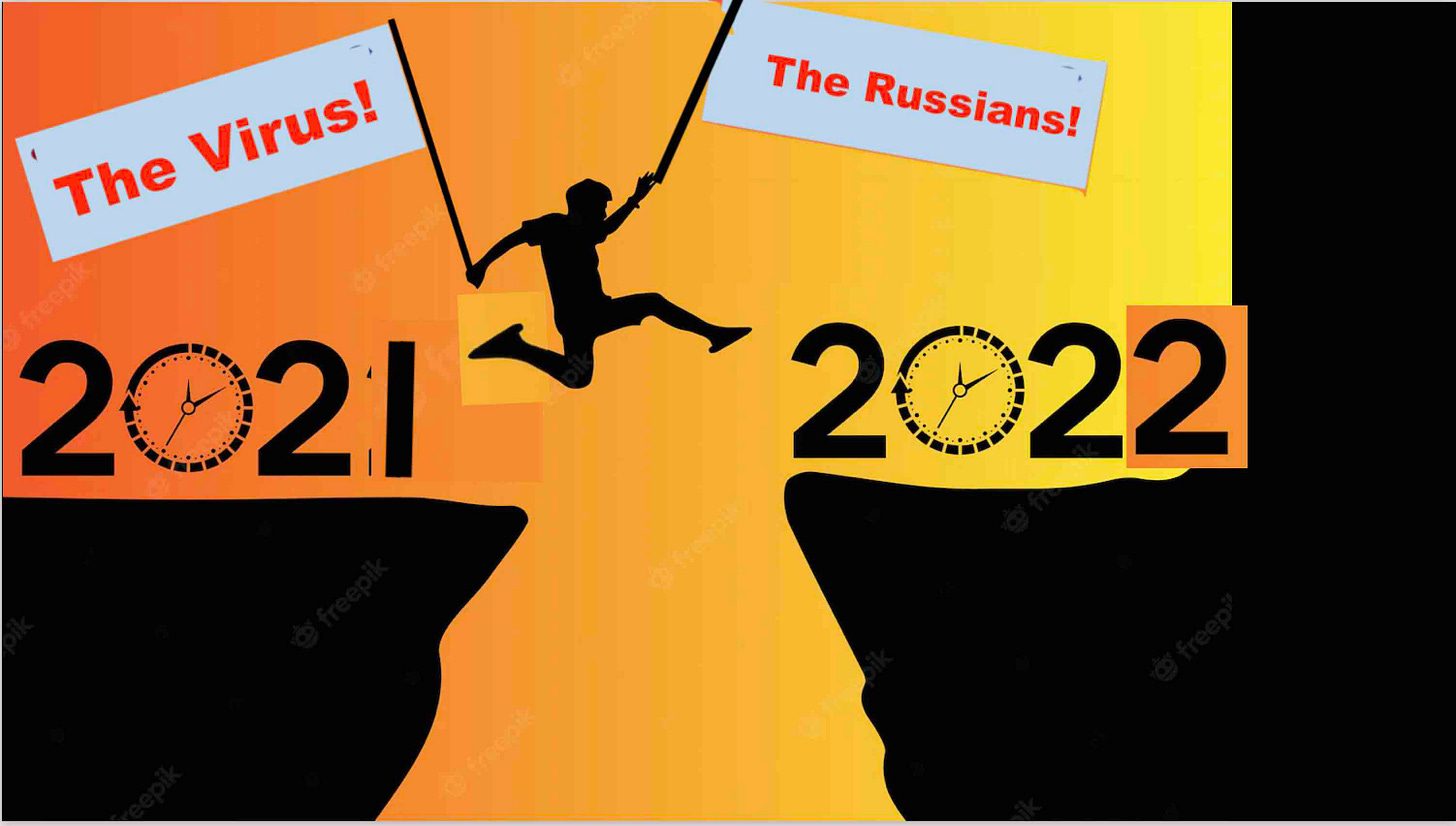